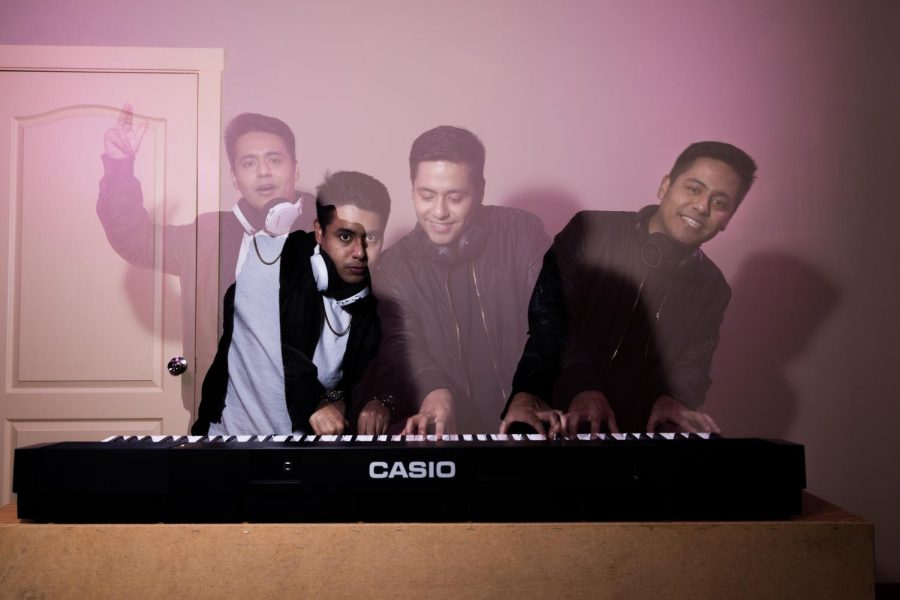 Carlos (Solrac) and Beto Concha (Oteb) mess around on a keyboard and turntable in an indoor set up on Nov. 5, 2020. DJs Oteb and Solrac have gained attention overseas with their song "Amante," which was produced along with Bay Area producer Clayton William and Trinidad artist Braveboy. (Jun Ueda / Xpress Magazine)

Bay Area DJ duo OtebNSolrac, consisting of twin brothers Beto “Oteb” and Carlos “Solrac” Concha, felt the loss when the statewide shelter-in-place first happened in March. With clubs shut down around the Bay Area as the result of COVID-19, a huge source of their income was now gone. However, a new song released on Sept. 18 by the duo titled “Amante” has given the brothers a rise in popularity amid the pandemic.

Since COVID-19 put a halt on concerts and club events, the music industry has had to adapt with the times. The lack of live events has made it harder for musicians to earn an income due to the loss of a live audience. To remedy this issue, live concerts have migrated to streaming platforms such as Twitch in order to provide fans with a similar experience to attending an in-person concert. OtebNSolrac have gone this route as well, hosting streams of the two performing DJ sets for viewers on occasion.

The brothers were on a hot streak before the COVID-19 pandemic put a halt to it all. Prior to the state lockdown, the twins DJ’d for Bay Area radio station 99.7 NOW, in addition to regularly performing in the club scene. They also attended the National Association of Music Merchants convention (NAMM) for turntable brand Technics and performed for convention attendees. The NAMM show is a convention held every January at the Anaheim Convention Center that exhibits the newest products for musicians.

Despite the challenges, the twins now have a hit record on their hands. Collaborating with Bay Area producer Clayton William and Trinidad artist Braveboy, Amante, has blown up in countries such as the United Kingdom, Spain and Braveboy’s home country of Trinidad.

The dancehall-moombahton track has propelled the twins monthly Spotify listeners from 90 to 10,000 in a matter of two months. Moombahton is a fusion of house music and reggaeton that first gained prominence in 2008 when DJ Dave Nada created the genre. Beto describes the song as having an upbeat, summer vibe to it. He jokingly called it sexy, noting that that is Braveboy’s favorite word to describe the song.

OtebNSolrac attributes their overseas success to how countries such as the U.K. and Spain have handled the virus compared to here in the U.S.

“It gained popularity where COVID is under control,” Carlos said. “I know Trinidad is going through it right now, but the U.K. and Spain, they have it locked down,” Carlos said.

The song idea came from Beto and a friend, fellow producer, Gibran “Gibrawn” Huerta, who wanted to create a Latin-inspired track. Huerta recommended they collaborate with Braveboy, as he felt the Trinidadian artist was a perfect match for the song. After listening to some of his prior music, the brothers agreed and the collaboration commenced.

“He had bars to cut it short,” Beto said.

With the brothers in the Bay Area and Braveboy in Trinidad, communication between the two parties was done solely through email. The time zone difference between Pacific and Atlantic times meant the twins stayed up late some nights in order to be awake at the same time as Braveboy and work on the song together.

Once the song was finished, a turn of events followed. Clayton William, a Bay Area producer for EMPIRE records in San Francisco, was in contact with the twins with the goal of producing a new hit. One the song was finished, the twins sent William the track. The producer responded saying, “I’m over here looking for the next big track, and you guys just randomly direct-messaged it.” The song ended up being distributed by EMPIRE upon release.

The main priority for the twins right now is getting the song out to DJs. DJs often have large followings and play a large role in popularizing tracks, according to Beto. The twins noted something big in the works for the song but remained hush on the details.

OtebNSolrac is eagerly anticipating their comeback once clubs and concerts reopen. Describing the reopenings as a big reset button for music once it happens, the two said they plan to go all in once that time arrives.

“What’s better than having a party track like Amante, everyone’s gonna wanna party, I know everyone’s tired of being in the house.”