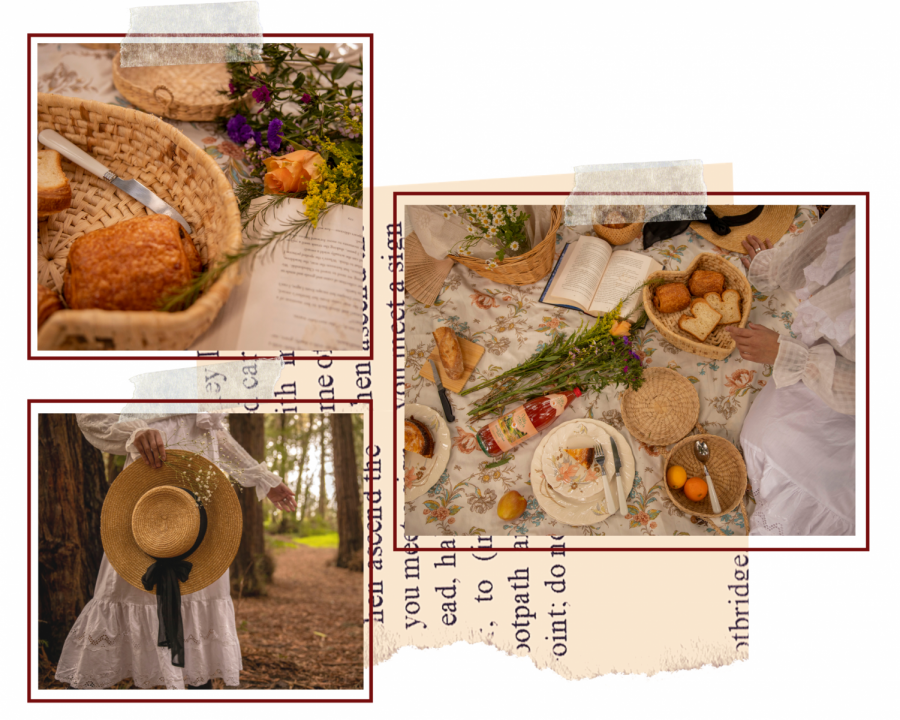 Sunlight dapples through dense foliage, casting an amber glow onto the wooded path below. The path, if followed, leads to a clearing where a small house sits, flanked by delicate flower beds on each side.

An immaculately arranged picnic sits under the shade of a tree, complete with a tea set and a loaf of bread one can only assume has been just baked. The only sounds to be heard are the chirpings of birds or the babblings of a nearby stream.

This is cottagecore, an aesthetic movement that glorifies cozy, slow living in pastoral or woodland fantasies, and it has taken the internet by storm.

According to a Vox article, cottagecore earned its name around the year 2018. However, it wouldn’t be until 2020 that it would achieve such virality. Much of the aesthetic’s success has been attributed to TikTok, with the hashtag amassing over 5 billion views on the video-sharing app. Most videos encapsulate a certain essence of cottagecore with content ranging from baking frog-shaped bread to frolicking in meadows at dusk, to foraging for mushrooms and the like, sometimes with a rose-colored filter over top. Other videos focus solely on the fashion of it all.

“Cottagecore on TikTok had a really big boom in summer,” says Didi Nicely, a 25-year-old fiber artist based in Atlanta, “It was all about picnics and sunshine and that one Mitski song ‘Strawberry Blonde.’” With such a strong connection to summer, it’s almost instinctive that the fashion would reflect that. Essentially, says Nicely, cottagecore fashion is made up of “clothes that look like they make you want to frolic.”
The ‘original’ cottagecore

Cottagecore fashion is soft, flowy, and romantic, but it’s nothing new.

According to Judy Jackson, a professor of fashion history at the City College of San Francisco, “when new designs are created, they certainly are not just copies of something that came before,” she wrote in an email, “but one can almost always see an influence from the past.”

The aforementioned elements of cottagecore are all reminiscent of the pioneer trend of the 1970s. “Little House on the Prairie” was an institution in popular culture at the time. The television show has been argued to be the largest contributor to the prairie fashion craze, popularizing labels like Laura Ashley and Gunne Sax. However, this aesthetic was clearly not invented in the ‘70s and was rather a resurfacing or reinvention of historical garb from as far back as the 18th century.

Evidence of cottagecore-esque elements, whether fashion or values, can be traced back to Marie Antoinette, the last queen of France before the French Revolution.

According to Dr. Amy Dorie, the Apparel Design program lead at SF State, “Cottagecore has a long and cyclical history as a rejection of the modern world and yearning for the perceived simplicity of the country,” she wrote in an email.

Antoinette sought an escape from the rigidity of the French Baroque court, often leaving for her countryside chateau Le Petit Trianon, Dorie says. At the chateau, she would regularly be found in peasant-style dresses, introducing what would become known as the Chemise a la Reine, which directly translates to “queen’s shirt” (though, says Jackson, the term “chemise” was often used to describe a woman’s undergown).

According to Jackson, over time, the Chemise a la Reine would evolve and, by the late 19th century to early 20th century, a style called “lingerie dress” would become its revival.

Also inspiring contemporary cottagecore fashion is the dirndl, a traditional dress characterized by a low neckline, fitted bodice, and full skirt that originated in the Alpine countryside. Similar to the story of the Chemise a la Reine, the dirndl was originally worn by working-class or peasant women in rural Bavaria in the 1800s before being adopted as leisurewear by the bourgeoisie in the 20th century.


Escapism or mindfulness?
Cottagecore’s yearning for simpler times runs parallel to how people have been feeling during the pandemic: wanting to escape the dreariness of today and return to the before times. But is cottagecore serving as a distraction from an unpleasant reality, or might it instead be a vehicle for gratitude?

Nicely says that although cottagecore appears to have an inherently escapist nature upon first glance, her experience with it has certainly “allowed for a degree of mindfulness.” In this way, cottagecore has some overlap with slow living, a lifestyle that emphasizes a more present and relaxed approach to the everyday.

Rebecca Stice is a 33-year-old slow living content creator based in Northern Ireland. After being introduced to the concept of slow living about seven years ago, Stice began implementing more and more changes into her life to reflect that lifestyle until eventually moving with her husband to a small, rural village in search of an entirely different pace of life (due to privacy and safety concerns, Stice prefers for the village to be left unnamed). “People often describe (cottagecore) as romanticizing rural life, but I feel like what romanticizing means is learning to appreciate the little things,” she wrote in an email.

It might seem a bit paradoxical for a movement that romanticizes a more rural existence to be largely internet-based, but it’s the idealization that the culture relies on to exist, not the actualization of life off the grid. “I don’t think embracing cottagecore means you have to reject technology or modern life,” Stice says. “You’re escaping, yes, but not to a magical realm with flying horses or something. Rather, you’re escaping into the very real world of nature—which at its height and beauty is awe-inspiring and magical on its own.” One can be Very Online and still yearn for simpler times, so long as they are stopping often to appreciate more. “That’s the thing,” Nicely says, “Once you start trying to make your life look idyllic in order to make videos about it, eventually, you will have succeeded in making your life more enjoyable.”
Fashion reflects the times

Since the 1960s, the direct influence that designers have on trends has only declined. These days, popular media, entertainment, and the internet are much more influential. Society is in a novel age of fashion where what exists instead are what Jackson calls “fashion tribes.” Instead of the one singular or universal look, hemline, or silhouette that previous eras have thus far seen, there is a seemingly endless amount of them. “We have as many fashion trends as there are interests in our lives,” she says, “And each tribe knows who to look for for their trend information.”

There is a pattern, however, when it comes to the reappearance of this romanticized femininity now seen in cottagecore fashion: it is almost always joined by some significant societal shift. The 18th century was marked by the Industrial Revolution. Fast-forwarding to the 20th century, the revival of pioneer fashion came around the time of great civil unrest regarding both the Vietnam War and the civil rights movement. Today, society endures a pandemic.

The cyclical nature of fashion doesn’t have a strict set of rules rather than general patterns. Though it is fundamentally inevitable for old trends to be refashioned, it typically takes some time (some say around 30-40 years) for them to resurface. In this respect, cottagecore appears to be right on time.

Essentially, cottagecore is a revival of ‘70s prairie is a revival of 18th-century rural fashion — an iteration of an iteration, updated and modernized. During a time in which folks are confined to their homes, there’s been an unsurprising surge of hobbies and activities, such as baking, gardening, and embroidery, that are traditionally associated with domesticity and, for this reason, associated with cottagecore. “It makes sense that the country and country life are seen as ideal and are inspiring fashion trends again,” Dorie says.

Nicely attributes the strong appeal of cottagecore to a combination of things. “Quarantine, TikTok, free time, summer vacation, people wishing they could be going and doing summer activities with their friends, but they can’t,” she says, “So the next best thing is having a picnic by yourself, and taking a video of it and showing it to people.”

The English cottage look and fashion elements reminiscent of life on the prairie simply fit into this mindset, Jackson says, “and of course, since most of us are no longer working from an office, comfortable clothing is far more in demand now than exciting and exotic design.” Who’d have thought that people stuck at home would begin to value comfortability?

Jackson predicts that cottagecore fashion will stick around for at least a little while even after normalcy returns, as people may have adjusted to this new way of life and thus are disinclined or hesitant to revert to fashion formality. “However, as always,” she says, “The eye will tire of it, and we will want something new, and perhaps something that doesn’t remind us of these difficult times. And when we do, something new will emerge.”