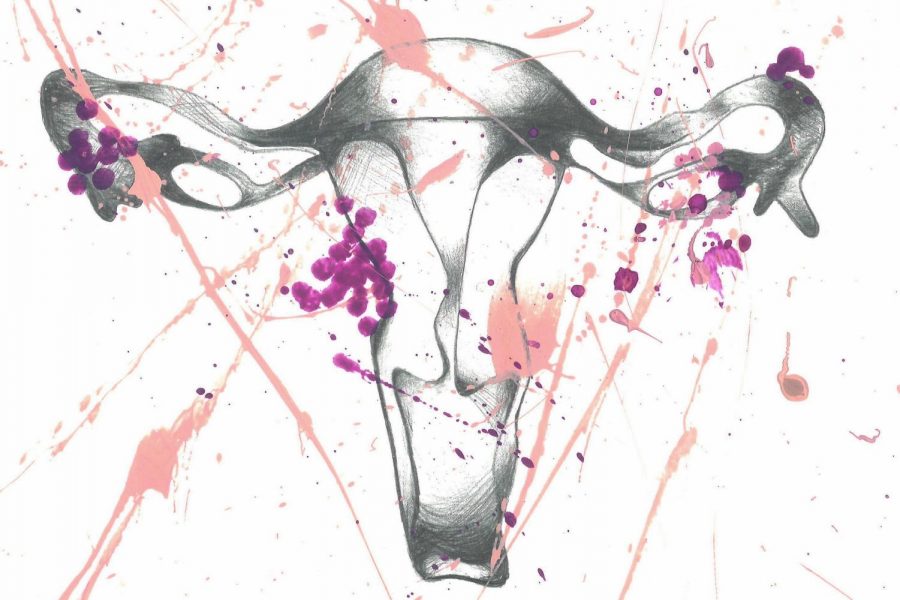 Janette Rogers-Booth walked into her school nurse’s office feeling humiliated, alone and bewildered. She was in the fourth grade and asked for a sanitary pad because she started cramping, bleeding through her pants and vomiting.

“You need to be better prepared for your period,” said the school nurse.

But Rogers-Booth wasn’t experiencing a normal period — it was endometriosis.

The Center for Endometriosis Care (CEC) in Atlanta defines endometriosis as the existence of tissue that is similar to the endometrium (endometrial lining) growing outside of the uterus. The disease can grow throughout one’s entire body, including the pelvis, lungs, diaphragm, bowel, spine, etc. Though it mostly affects women, endometriosis can also affect transgender men and nonbinary people.

No one knows the cause of the disease, yet it’s known to be estrogen-dependent.

“It literally stung deep to be shamed by the nurse instead of being empowered and uplifted,” said Rogers-Booth. “I felt like my period was shameful and for a long time I did not like to openly discuss my period or pelvic pain.”

Her life with the disease has been difficult and complex.

“When I am having a flare-up, my quality of life is very poor and the pain and complications are severe. Usually, at that point, I am in bed not able to participate in my normal daily activities. It is exhausting to fight that long without having an answer as to what it is you are fighting,” Rogers-Booth said.

Rogers-Booth, 41, currently lives in El Dorado, California and still suffers from endometriosis. She’s undergone upwards of five surgical procedures to lessen her symptoms of the disease. Rogers-Booth is currently waiting to undergo yet another excision surgery, which is a procedure involving the removal of growths.

Some symptoms of endometriosis include debilitating pelvic pain, nausea and vomiting, brain fog, infertility, and dark discharge that resembles coffee grounds. According to a Healthline article called What Are Chocolate Cysts? patients can grow “chocolate cysts” that are brown and thick in appearance deep within the ovaries. Endometriosis can also cause heavy scarring that resembles spider webs.

Like many other women who have this disease, Natalie Gee of San Francisco, California also struggles with infertility. She suffers from endometriosis and adenomyosis, a condition where tissue similar to the endometrial lining grows within the uterine wall.

She recently found out that she will need to have another excision surgery so that she can be able to carry a healthy pregnancy to term.

Silvia Young, who lives in Danville, California with her husband and two children, has written books and policies to document women’s stories and to fight for patient rights in California. Young is also the founder of the nonprofit FemTruth Youth, which aims to dispel myths and misinformation about endometriosis.

“I’ve given birth twice and endometriosis is worse,” said Young. “Imagine being in labor, having the flu and no one believing you. That’s living with endometriosis. It’s your worst nightmare.”

According to the Australian nonprofit health service organization Jean Hailes for Women’s Health, the disease affects 176 million people worldwide, making it likely that you probably know someone with endometriosis.

However, according to an article on the organization’s site, since it takes an average of 10 years to be diagnosed, many people may not even know that they have it. Diagnosis requires laparoscopic surgery, an operation that uses three incisions in the abdomen or pelvis, to remove tissue so it can be tested in a lab.

Once a patient is diagnosed with endometriosis, they may also find it difficult to receive treatment from a doctor who is knowledgeable about their condition, according to an Everyday Health article, Finding an Endometriosis Expert. The article states that there are only a few gynecologists who can remove the disease.

Jessica Rose from San Ramon, California has suffered from endometriosis symptoms for 21 years. She, like many endometriosis patients, has co-occurring conditions such as polycystic ovary syndrome, a hormonal issue that causes cysts on ovaries, gastroparesis, a condition where the stomach doesn’t empty properly and postural orthostatic tachycardia syndrome, a condition where blood doesn’t circulate correctly.

“It is a true struggle to find doctors with the right expertise,” said Rose. “Some of these doctors don’t have a lot of background or knowledge about endometriosis and the best ways to treat it. I feel like due to this, I had pain and I struggled for a longer period of time.”

In addition to Rose’s struggle to find knowledgeable specialists, she has also experienced gaslighting within the medical community.

“I have heard that this pain is in my head so many times that sometimes it makes you feel like you are going crazy,” said Rose. “(Doctors) tell you that you’re medication seeking, and they treat you like you are not worth their time.”

Many endometriosis patients may experience medical gaslighting, which happens when a healthcare provider dismisses or minimizes a patient’s symptoms.

Currently, there is no cure for endometriosis. However, the CEC uses excision surgery, in conjunction with lifestyle changes, to remove endometrial tissue in hopes of managing symptoms and preventing further growth throughout the body.

Carolyn Nelson of Livermore, California was diagnosed with extra-pelvic endometriosis, which means that endometriosis was found outside of her pelvis. Nelson had endometriosis on her lung and diaphragm.

Nelson said that she lived with unbearable pain for many years, however, after undergoing her third surgery, life slowly became better.

“This affected my husband and children of course, with my husband having to miss work to support me and our children. I feel that endometriosis robbed me of a good career and much of my children’s younger years,” Nelson said. Fortunately, she said that she hasn’t had an episode of pain in about a year.

Lizanne Pastore, a pelvic floor therapist from Sonoma Pelvic Physical Therapy in Sonoma, California, stated that current literature suggests that a team approach in treatment, including physical therapy, is the gold standard for treating people diagnosed with this condition. She specializes in treating patients with chronic pelvic conditions, including endometriosis.

Pastore emphasized that patients affected should be referred to a pelvic floor physical therapist to learn more about their body and management techniques.

“We can provide countless strategies for patients to work with their pain by using breath, pain-relieving postures, resting poses, exercise, stretching, and self-massage to relax tight muscles,” Pastore said.

It is important for loved ones to support patients with this disease because they may struggle to get the support and compassion they require since they do not always appear sick. Gee encourages patients to reach out and get support from others. With the use of social media, there are many support groups online where patients can connect and support each other.

Gee said. “Join Facebook groups with other people who have endometriosis. Sometimes knowing that other people also deal with this issue makes it less lonely. Have a friend that you can talk to.”

“There’s tremendous support on social media. I didn’t have this growing up so it’s a different path of awareness, education, and support now. I find the Instagram accounts Center for Endo Care, Endometriosis Summit, and Extra Pelvic Not Rare to be very helpful,” Young said.

“Living with this disease is not easy whatsoever,” Rose said. “But the women who live with this disease are as strong as all hell. They have to pull themselves out of bed some days when they feel like they’re being ripped apart. They have to advocate for themselves and believe in themselves even when sometimes no one else does…These women are fighting a battle that no one else can see. These women aren’t just strong, they are warriors.”

Editors note: an earlier version of this story stated that endometriosis may occur in people who menstruate. Endometriosis can occur also occur in those who do not menstruate.

If you or someone you know is suffering from pain and feeling hopeless, please reach out to the National Suicide Prevention Lifeline at 1-800-273-8255.