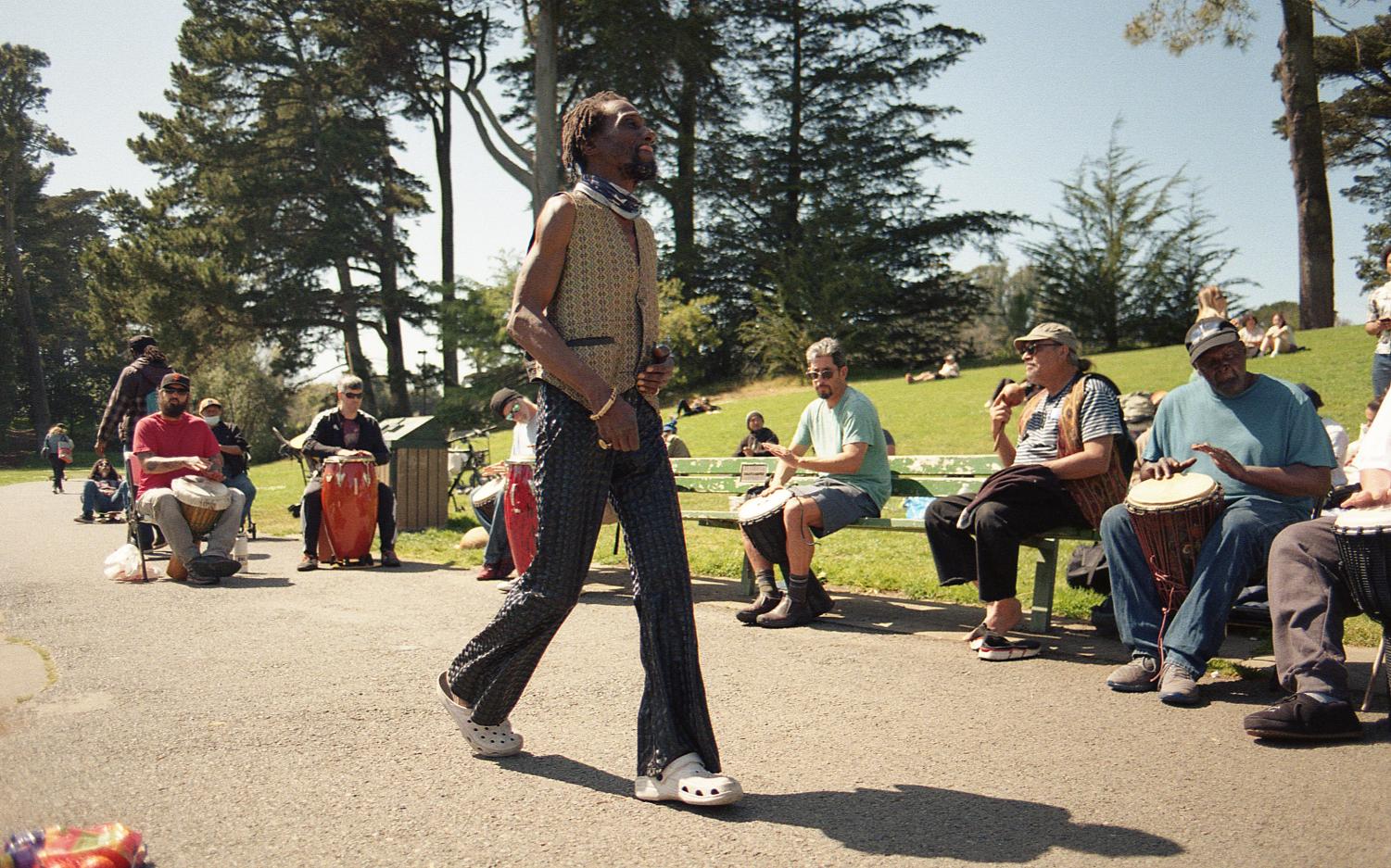 Larry Miles struts in the middle of the Hippie Hill drum circle on April 9, 2022. Miles is a regular to the drum circle and often sings and dances in the concrete pathway. (Maximo Vazquez / Xpress Magazine)

Larry Miles struts in the middle of the Hippie Hill drum circle on April 9, 2022. Miles is a regular to the drum circle and often sings and dances in the concrete pathway. (Maximo Vazquez / Xpress Magazine)

Near a single green wooden bench at the base of Hippie Hill in Golden Gate Park, Alex Carpenter grabs an orange to eat from a communal offering. He paces around the open patch of grass while twirling a 5-foot-long wooden stick. After this ritual, he finds a place to sit in a drum circle and initiates a hypnotic rhythm on the conga.

When the weather permits on weekends, drummers ranging in skill level have been gathering to play at Hippie Hill, “Since the 1960’s when flower and love was everywhere,” said regular Hippie Hill Drummer David Aluf referring to the Haight-Ashbury counterculture movement of the 1960’s.

As time passed, this movement subsided but the Haight-Ashbury neighborhood embraced the hippie movement of that era through it’s tie-dye-themed store and murals of rock legends such as Jimi Hendrix and Jerry Garcia that are scattered along Haight St.

On the weekends at Hippie Hill, the sounds of Drums remained. Drummers like Carpenter, who was born and raised in San Francisco, have since kept the tempo of this tradition alive and powerful.

Steve Tanksley plays drum during a group performance at Hippie Hill in Golden Gate Park on April 17, 2022. Once he was finished playing he said how not knowing people’s names does not get in the way of them playing all together. (Maximo Vazquez / Xpress Magazine)
Bobby Ray Hayes plays the drums at Hippie Hill in Golden Gate Park, San Francisco on April 9, 2022. Hayes is a frequent member of the drum circle, usually playing on his single drum kit or conga drum. (Maximo Vazquez / Xpress Magazine)

“I started playing here when I was 19-years-old,” said Carpenter, 40, as he hovers around the circle listening to the rhythm of the group. “This is a place for people to heal.”

The drummers all play based off of intuition through musical improvisation. They don’t practice or have a leader, rather everyone is given the freedom to play how they choose. The beginnings of “songs” occur organically in a moment of spontaneity with a spark from a simple beat or a repetitive phrase.

As energy flows from one slap of the drum to another, “songs” can last 10 to 15 minutes at a time. Some days instruments other than percussion are thrown into the mix such as guitar, saxophone and harp. All the musicians come together as one to participate in a musical and emotional expression.

People who are passing by often become sonically entranced by the group and congregate on the hill to observe this free performance.

“You get tricked and pulled in because everyone loves music,” said group member David Aluf.

Aluf first discovered the drummers in 1987 when he worked with children who were diagnosed with muscular dystrophy and brought them to Golden Gate Park for excursions. Now living in Marin, he still makes the trip most weekends to play at the park, usually bringing his drum stick and cowbell.

As time has passed, Aluf said that the drummers who congregated here when he first arrived in 1987 are mostly gone. But, new drummers always find their way to the Hill through word of mouth by their fellow musicians and friends. You don’t have to be a classically trained musician or be a skilled drummer to join in.

Anyone and everyone is allowed to participate and the drummers often encourage people to pick up an instrument or even dance when they walk by on the concrete path.

“This is a great place for people to really release their mind, from my observation,” said Aluf. “That’s all this is, we’re just expressing ourselves.” 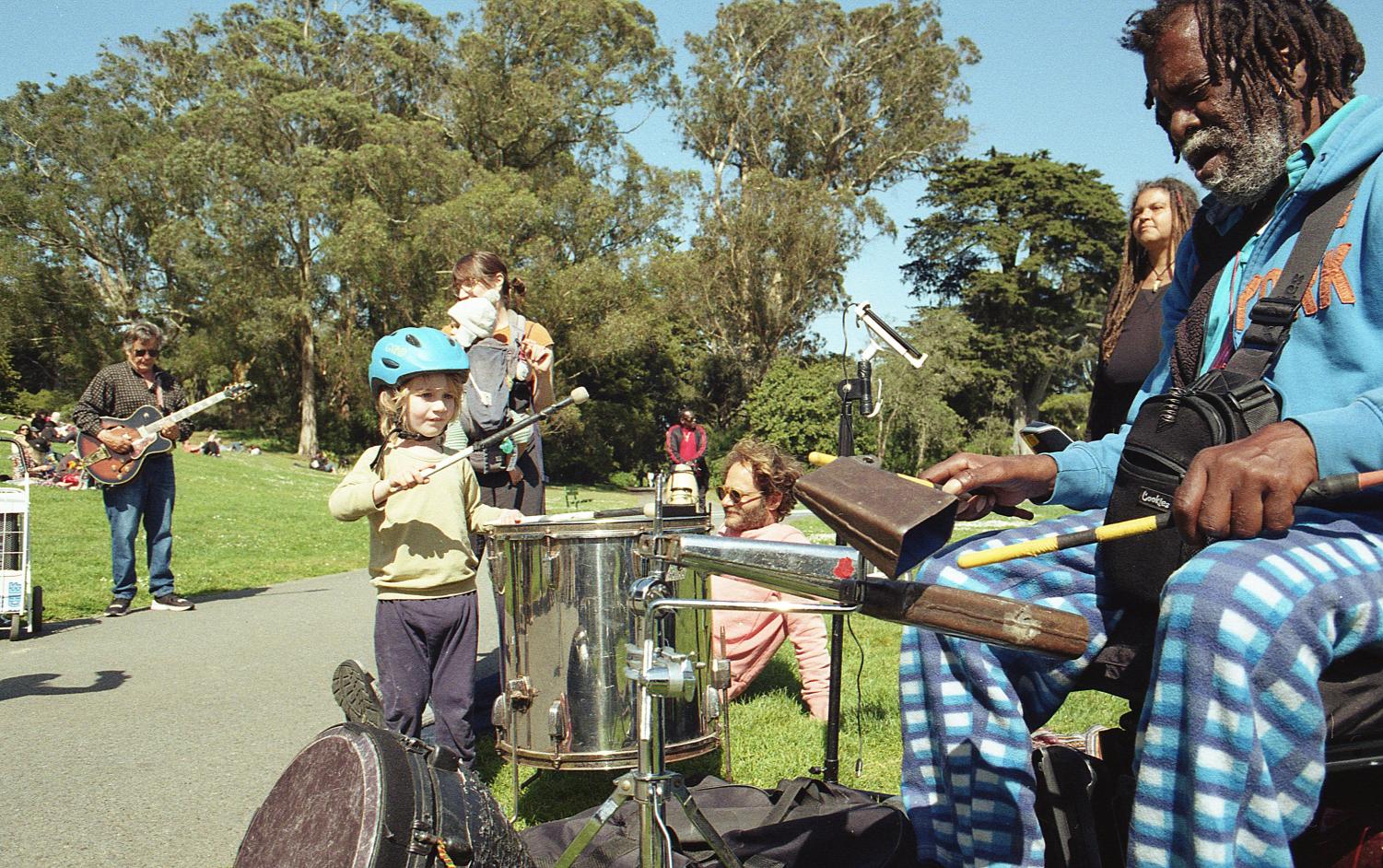 Bobby Ray Hayes plays the drums after handing a child drumsticks to play along at Hippie Hill in Golden Gate Park on April 9, 2022. Hayes is a frequent member of the drum circle, usually playing on his single drum kit or conga drum. (Maximo Vazquez / Xpress Magazine)