When Fashion and Art Collide 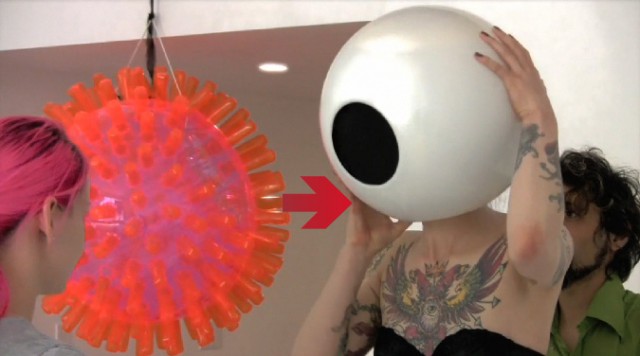 Written and photographed by Julio Cortez

A model creeps onto a white strip of runway in wedged ankle boots — everything but her arms and head bare as eyes in the front row shift up and away from their smartphones. A long trail of black hair drapes down at her sides, her arms spread apart and palms face up, channeling a divine creature that may have found its way out of a clogged drain. Her face is covered but her body is open and naked for the most scrutinizing eyes to see. She dons a furry medieval hood that funnels out toward the audience and her draping hair covers her shoulders and trails down between her breasts.

A month after the show, Bayview designer Ilanio Reuben is sitting on a wooden stool inside El Toro Taqueria on Valencia and 17th Street in San Francisco. This is the Bayview designer’s first time coming to taco happy hour, so he goes for the miniature stacked tortillas, drizzled in grilled carne asada and pico de gallo.

“In the fashion world, you make money by selling product,” he says, his black goatee curling down in strands of black and bleach peeking from under his ribbed beanie. “I came out of the retail world myself and I don’t really want anything to do with that.”

The independence, materials, and performances that set the foundation for Reuben’s Ilanio collection make him more of a designer/art dealer than a brand name business. If and how something can be worn is only the beginning of a conceptual design. He prefers to disregard functionality, marketability and practicality when it comes to design. This includes the use of materials you won’t find at The Gap, like aluminum wiring, polyurethane, surgical tubing, wigs and even those hippity-hop balls kids like to bounce around on at Toys ‘R Us.

The Supreme Beings conceptual fashion show took place in March at the SOMArts cultural center, though Reuben originally planned for the presentation to take place at the Saint John Episcopal Church on 15th Street and Julian Avenue in the Mission District.

“Last minute, six weeks before the show, they had a meeting and said we couldn’t have alcohol or nudity in the show,” says Reuben, who admits he was taken aback and said he became a little angry that it took them that long to tell him, especially for being “a very progressive church.”

One look in particular made everyone in the room – especially the front row – look away from their iPhones. A white rubber cowl dress paired with an eyeball helmet and invisible shoes tip-toes down the runway. The dress is actually made of polyurethane, which is a two-part rubber compound that’s fairly low in toxicity of fumes on various plastic resins.

“I didn’t know anything about polyurethane or that I wanted to use it,” Reuben admits, crediting the sculpting geniuses at Douglas and Sturgess near 5th Street and Bryant Avenue. The owner, Arty Cordisco, spent more than an hour with Reuben going over each and every one of his sketches, suggesting materials and different approaches in making them.

“There’s various hardness of the material you can use, from a super stretch to more of a shoe rubber,” says Reuben of mixing the polyurethane. The white rubber panels were each made by a fabricator, who poured the mixture into a premade mold.

“All these materials – not many people know how to work with them in fashion,” he says. “It’s cool because it’s sort of a mystical knowledge. You can’t even find it on the Internet because so few people are working with these combinations.”

There are boundaries between fashion and art and they’re too often off-limits for designers, but Reuben is willing to explore that gap between design and performance art. There are no investors to please or buyers to produce for because the one of a kind collection speaks for itself. In short, Ilanio’s Spring 2012 presentation (http://ilanio.com) is a big “fuck you” to the commercialization and pleasing the masses.

“In the art world, they don’t want to touch fashion with a ten-foot pole,” says Reuben, “I guess it’s understably too commercial for them.”

“And if it comes down to finding buyers, I’d rather turn some of the designs into lamps,” he says. “That might be more interesting than going back to retail.”

The designer admits he wouldn’t have anything to do with fashion if it wasn’t for the Burning Man festival. The week-long event is held annually in Nevada’s Black Rock Desert and promotes a sense of community amongst radical artists in the sands of self-expression. Reuben has been going there since 2001. During that time he met his wife there and together they continued the yearly trek into the desert for the next decade.

“It just blew my mind,” says Reuben, taking another bite of his taco, “Seeing the way people express themselves in a completely uninhibited way.”

One year before they headed to Burning Man, he and his wife got a sewing machine and started messing around with it. They created Burner fashions for the sake of self-expression, but people’s compliments led to even better inquiries.

“We started the Ilanio Wear business to get that stuff out into the world not really with the goal of making a ton of money,” says Reuben. Ilanio Wear had a pretty loyal following, but saw its final release in the fall of 2009 when it reached a crossroads of possible commercial expansion.

“We had the choice at one point to make a go of this as a business and make our stuff in China, make crossover designs to get into stores, or just fold,” says the designer, admittingly loving fashion design up until this point. “That just seemed to me like it was going to be more work that was less fun and it didn’t seem like it’d be going in the right direction.”

“Fashion could be so interesting,” says Reuben of what he took away from his Burning Man years. “It could be a real individual expression that isn’t a choice of which site I’m going to buy my stuff from or which magazine I’m styling myself after,” he says, which is kind of ironic because Ilanio Wear, more than anyone, has been accused of commodifying the Burning Man fashion scene.

Ilanio’s new creations still cling to the essential Burning Man traditions of free-thinking and sustainability out of today’s cultural influences.

“Even for Burning Man, they’re just too unwieldy and fragile,” says Reuben. “Stuff for Burning Man has to be really durable because it gets thrashed.”

Clouds of gypsum, which is what they make drywall out, engulf the burner’s paradise. It’s a very alkaline substance that you can get close to clean, but never the way it used to be. It’s not necessarily dirt in the air, but playa dust that gets into every nook and cranny.

Srira Zadmehran didn’t know much about Burning Man until she met Reuben, but the dust from the Black Rock Desert that comes home with every single attendee is all too familiar for the designer.“There was silt all over his boxes when we were going through everything,” Zadmehran laughs, wishing he had cleaned them up before hiring her. It was during a late night visit to a 24-hour laundromat in the Mission that Zadmehran crossed paths with Reuben – sort of.

“My mom found an ad looking for a seamstress,” says Zadmehran of the winter 2010 encounter, “and she brought me one of those tiny pieces of paper that you tear off.”

Soon after Zadmehran contacted Reuben, she met him with her 2010 California College of the Arts (CCA) graduate portfolio and a couple of pieces from her collection of childrenswear (http://srira.com).

Prior to being hired by Reuben to assist him with the Supreme Beings project, Zadmehran said she was depressed, and trying to catch up on sleep and out of her mind with boredom.

“I would stay up sewing all night, then it’s suddenly 5 A.M. and the birds are awake,” says the Lower Haight resident. “That’s when you know it’s really time for bed.”

While studying fashion design at the CCA, Zadmehran’s fashion illustration teacher approached her about her sketches because they had an androgynous nature to them and were different than those of her peers.

“Maybe I take it from myself or my mom,” Zadmehran says of her art, which she’s worked on since enrolling in art school at a very young age. “We have bigger hands, broader shoulders – you know, stronger women.” She later says she forgot to mention the hips.

Non-traditional statements of femininity and sexuality are sometimes found in Zadmehran’s work with Reuben and some of her past college projects, but they’ve always been concepts in her artwork. She mainly focused on childrenswear her senior year.

Sometimes it’s the actual foundation of constructing materials that’s trickier than getting the ideas out there. One Supreme Beings look in particular took a lengthy trial and error run to execute its ideal concept. “Spikey” is the black single strap dress worn by Raven Le Faye. The piece is made of impregnated fabric, polyurethane and polystyrene, which results in the oversized blowfish silhouette protruding off the side of the mini dress.

Reuben impregnated the fabric himself by first laying it down into a flat surface with dipped edges as if he were marinating meat. Next, he pours the polystyrene liquid over the fabric and lets it settle. After peeling it off, he cuts the fabric to the pattern he finalizes with Zadmehran. Finally, chiffon paper is used to sandwich the seams of the dress between the paper so that it slides through the sewing machine.

Now that’s a more cleaned up version of the original story. They came up with ideas, shapes, and materials after looking at Reuben’s sketches. Muslin was draped on a dress form to create the shape, but the original materials turned into a trial and error process that ended up looking like a trash bag.

“It was a pain in the neck,” says Zadmehran of Spikey’s conception. “We collaborate on a lot of stuff together. You have to when there’s two of us, but it’s his idea,” she says of Reuben’s concepts. “It’s in his head. I can’t just be like ‘poof, here’s that thing you wanted’.”

Sometimes when you take a drawing to a fabricator, there might be a loss in translation from concept to creation. You see what it comes out like and it looks like the drawing, but it’s not what you pictured it as in your head. A situation like this occurred with Rob Vial, the fabricator of the acrylic and vinyl heels, and Rueben’s original sketch for the Invisible shoes.

Vial felt bad that the original Whipping Willow hat didn’t come out the way Reuben envisioned it, so the fabricator decided to make the invisible shoes for the Supreme Beings runway show.

”He never worked with bending acrylic before,” says Reuben, “but he totally pulled it together, and I literally picked the shoes up the day before the show.”

Reuben’s sketches come out like diarrhea – and those are his own words.

“In three hours, I came up with this entire line and then I spent eight months working my ass off to make them.”

After all, sketching his imagination was only the beginning of the Supreme journey.

“It’s kind of like being a river that’s about to go over a waterfall,” Reuben says of the last couple of months.

The two month period prior to Supreme Beings was severely stressful. Reuben is little hesitant to get back into that river right now.

“The next thing you know,” Reuben says, “the current speeds up as deadlines approach, you can’t stop because you’re right on the edge of it all, and then you just fall.” And the show begins.

Ilanio Reuben: When Fashion and Art Collide from Xpress Magazine on Vimeo.