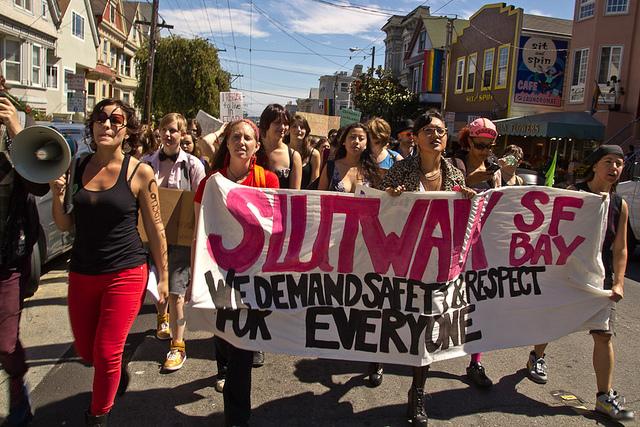 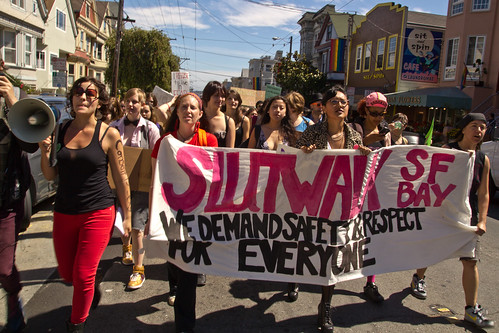 Jadelynn Stahl (with the bullhorn) and Maria Garcia, are two of the people leading marchers on Slutwalk from Delores Park to the Castro. Slutwalk was formed to help deconstruct the myths around rape, “slutshaming,” and victim blaming. September 8, 2012. Photo by Deborah Svoboda.

Jadelynn Stahl stands in front of the crowd with a kind of confidence that comes with natural leaders. In her hands she holds a portrait of herself as a child. The little girl in the picture is smiling faintly and wears a rainbow visor that reads “California.”

“Would you call this girl a “slut?” she asks.

She points to the picture. “This is the year I was raped.”

Stahl, along with fifty or so others, gather in San Francisco’s Mission Dolores Park for SlutWalk, a protest that is trying to shine light on the victim-blaming that many sexual assault and rape victims experience. The protest, deemed controversial by some, uses unconventional methods to gain attention to their cause. Some of the protesters are dressed simply in jeans and t-shirts but many sport lingerie and towering high heels. There are wigs, leather corsets, mini skirts, thigh garters, and lots and lots of skin.

The SlutWalk began in 2011 in Toronto, Canada as a response to an authority figure perpetuating victim-blame while speaking at a safety meeting at York University’s Osgoode Hall Law School. Constable Michael Sanguinetti told the attendees, “I’ve been told I’m not supposed to say this, however, women should avoid dressing like sluts in order not to be victimized.”

Outraged, Sonya Barnett and Heather Jarvis began SlutWalk in Toronto in an attempt to protest the blame of assault on victims. They believe that the person inflicting the violence deserves the blame, not the victim-no matter what their lifestyle or their choice of clothing is like. Whether they are male, female, gay, transgender, sex workers, prudish or sluts, SlutWalk participants and organizers believe that no matter the gender, age, dress or level of intoxication; rape and sexual assault are never the victim’s fault.

The walk has since spread to America, Berlin and London, and continues to become a global movement. Stahl has organized the protest in San Francisco, along with Mari Garcia, Evelyn Ramirez, Briah Luther, and Mera Kelley-Yurdin, and wants to make it an annual tradition in the city. Although the subject matter is dark, the organizers have made the effort to make it fun by encouraging attendees to dress as extravagantly as they choose.

“There has been communities that feel like the word “slut” has been used against them so terribly and horribly that it could not ever possibly be reclaimed,” Stahl says into the microphone slowly, enunciating each word with an undertone of controlled passion. “What this movement has done is that is has caused a national discourse and international discourse regarding the use of language and its importance.”

For Stahl, using the word “slut” is not about reclaiming the term but about starting a discourse surrounding the issues of victim blaming, slut shaming, objectification of women, and holding accountable the perpetrator for rape and sexual assault and no one else.

“When we say a word like ‘slut,’ what we are doing is we are calling upon people to examine the way they are speaking, and to examine the choices that they are making,” says Stahl. “To examine how they might be oppressing others with their speech and their actions. And that is why we are here.”

Regardless of the criticism many organizers wore lingerie and skimpy clothing. Garcia wore sequined mini shorts and towering heels, and SF State alumnus Diane Nathaniel has chosen a revealing corset and fishnets. At SlutWalk, the prudish, the crude, and the sassy are welcomed and adored. Academy of Art student Lauren Crow even made her own special underwear that are flesh colored and display a realistic “bush” on the front.

A new aspect of the 2012 San Francisco movement is the “Cliterature” table. It isn’t anything fancy, just a simple display of feminism books Garcia checked out at the public library on a card table. Garcia says that the Cliterature table was inspired by the Occupy protestors who often kept small libraries of social justice literature on their campsites. The Cliterature table, however, focuses on feminism and body positivity. Authors like Virginia Woolf, Simone de Beauvoir and Sylvia Plath are notable reads that were available for SlutWalk participants to pick up and peruse.

Other informational tables are scattered around the gathering that offer books, pins, and pamphlets about feminism. One attendee in particular, who has opted for a more conservative look, stands behind one. She wears a classic grey pencil skirt and an argyle sweater. Despite the strong wind that day, she stands smiling behind her table with the words “Whore Magazine” are displayed messily in purple maker on a banner in front of the table.

Ginger Murray is the editor-in-chief of Whore Magazine, a quarterly feminist print publication that she describes as “a women’s magazine that attempts to give dignity to what has been scorned.” Murray is also a regular contributor at SF Weekly for the blog column, “The Sweet Spot.”

“Sexual assault is a very serious matter, it still occurs everywhere and all the time,” says Murray. “To be able to speak up about that in a powerful way and in a public way and to express yourself and your body is very, very, vital and frankly just awesome.”

Sexual assault and rape are very common in this country. One in four girls and one in six boys are sexually assaulted before they turn 18 in the U.S., and every two minutes, someone is sexually assaulted, according to the Rape, Abuse, Incest, National network.

Dialogue about women’s issues is nothing new, but has recently been reignited this year at a national level. Conservative radio personality Rush Limbaugh and Missouri Rep. Todd Akin are only two examples of public figures who have openly stated values that caused an uproar of controversy.

In late February 2012, Limbaugh commented on how Georgetown law student Sandra Fluke was a slut for advocating the idea of birth control without co-pay. Limbaugh called the taxpayers pimps if they were to provide this form of healthcare.

“So, Ms. Fluke and the rest of you feminazis, here’s the deal. If we are going to pay for your contraceptives, and thus pay for you to have sex, we want something for it,” Limbaugh publicly stated on his radio show. “And I’ll tell you what it is: We want you to post the videos online so we can all watch.”

Comments like Limbaugh’s are the biggest battle for SlutWalk.

“I think that that’s the biggest misconception, is that we’re women saying that we’re sluts. That is not at all what the message is,” says Murray. “I find it baffling that people so immediately go to the place and respond without even considering everything else that is involved. But that’s it, and it’s frustrating that somehow people think we’re not honoring and not respecting ourselves for marching for this.”

Rep. Akin also ignited a national discourse over women’s health by presenting the idea of “legitimate rape.” In a KTVI-TV interview Akin was asked if abortion was acceptable in cases of rape.

“It seems to be, first of all, from what I understand from doctors, that’s really rare. If it’s a legitimate rape, the female body has ways to try to shut that whole thing down,” said Akin.

Akins and Limbaugh’s comments only gave fuel to the fire and energy of SlutWalk, with many speakers criticizing the ignorance of these men.

“It’s an election year, and a lot of people are starting to open their mouths, such as Representative Todd Akin… you are hearing these people say these ideas that are involved with rape culture and slut-shaming that are totally wrong,” says Garcia. “Especially with earlier this year with Rush Limbaugh who called Sandra Fluke a slut just because she went in front of a congressional hearing expressing her, and women’s needs, for wanting to have birth control in their healthcare.”

Speakers at the walk were enraged with Coconino Country Superior Court Judge Jacqueline Hatch of Arizona whose comments at the sentencing hearing of a sexual assault case blamed the victim for going out. The victim in question, was groped by an off-duty Arizona Department of Public Safety officer while at a bar. According to the Daily Sun, Hatch told the victim, “Bad things can happen in bars… if you wouldn’t have been there that night none of this would have happened to you.” Hatch also passed on advice her mother always used to tell her, “When you blame others, you give up your power to change.”

These are the kind of instances that spark a movement, the kind of stories that provoke change. Garcia didn’t call herself a feminist until she heard about SlutWalk and began reading feminist literature. By the end of her education in feminism, she attended SlutWalk and found herself impacted by the stories being shared.

“When I went to the SlutWalk march last year I was so moved by it. I cried during the speech that Jennifer Gonzalez gave. She’s a rape survivor from the De Anza case in which she was gang raped by the De Anza baseball team,” says Garcia.

The organizers want to educate and inspire activism among the public and bring an end to rape culture and society’s normalization of violence towards women that is seen in the media, music, and language.

“It starts at a young age, because we are raised with this woman, female, heteronormative binary way of thinking,” says Garcia. “We are raised with this idea that she [the rape victim] deserved it because she was drinking or because of her provocative apparel and it’s time that it stopped.”