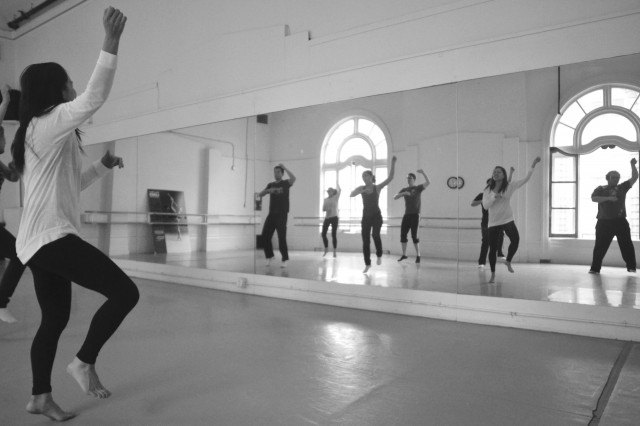 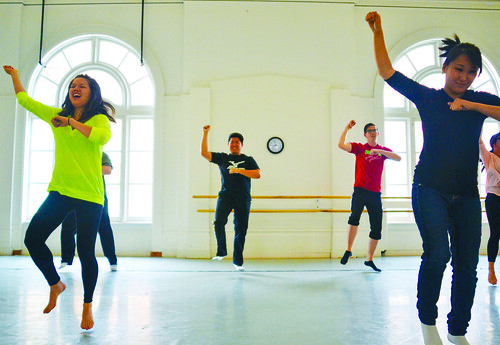 Alex Pytlarz, 24, (back, right), Justin Ignacio, 22, (back, left) and Angie Song, 24, (right) dance to the song, “Gangnam Style” by K-Pop artist PSY at a dance rehearsal in a studio on Market street. The dance rehearsal was in preparation for a flash mob and lead by Kat Dallons, 24, (left) on Sunday, September 26 2012. Photo by Andy Sweet/Xpress.

A bespectacled man sits in a beach chair in the middle of a playground as he stares into the blazing sun, consumed by sweltering heat. He seems to be in his thirties. He sports a white button up shirt with rose-colored shorts and his hair slicked back. A soft yet steady beat hums in the background and gradually becomes a more distinct tune. The scene suddenly changes, and the man is now dressed in a shiny, flamboyant, black fitted suit. He is no longer in a park, rather he is in a horse stable and proceeds to break into a frenetic dance. The music picks up into a faster rhythm. Vibrant images of the dancing man continuously change as the scenes switch back and forth. He is dancing in a bus, on a merry-go-round, in a field, and in a sauna. Suddenly a dance battle ensues between the bespectacled man and a fellow in a neon yellow suit in a parking garage. Within a second, he is on the elevator floor as another man vigorously gyrates above him. The scene then cuts to a subway station where a red headed woman along with others characters join him and the dancing resumes. The screen fades to black. It’s over, but a sense of confusion and amusement lingers and the words “Oppa Gangnam Style” echoes.

This bizarre sensory overload, compressed into a four-minute Korean music video that has enticed and hypnotized audiences worldwide, is known as PSY’s Gangnam Style.

The video, released in mid-July, has already racked up more than 300 million views, is number one on YouTube’s top 100. The song itself has also reached first place on iTunes charts and has recently been circulating on some Bay Area radio stations like 99.7 NOW! While Korean Pop usually caters younger generations, Gangnam Style has even allured older audiences.

PSY, born Park Jae Sang, has been an active entertainer since 2000 under South Korean talent agency LNLT Entertainment, and is currently signed under YG Entertainment. The 34-year-old’s viral video and sudden popularity in the U.S. landed him a seat at a Los Angeles Dodgers game in August to promote his song and wildly popular dance moves. The choreography that accompanies the song has sparked a Gangnam Style flash mob frenzy worldwide and dance cover videos and parodies all over the Internet. Since the baseball game, the South Korean pop star has already made other appearances on American network channels within the past several months, including the MTV Video Music Awards, The Ellen DeGeneres Show, and NBC’s The Today Show. The singer was also parodied on the season 15 premiere of Saturday Night Live.

Despite Gangnam Style’s sudden breakthrough and popularity, it is not the first attempt in introducing Korean pop music to U.S. and other international markets. The Korean wave, dubbed “Hallyu wave,” has rapidly grown in Asian markets and has gradually established a place in the United States. The term was coined to refer to South Korean culture and its surge in popularity, especially in the entertainment field.

“In the U.S., Asian Americans for some time have caught the Korean wave,” explains Grace Yoo, who is an assistant professor of Asian American studies at SF State. “K-pop has been around awhile and is now entering mainstream America. In this day and age, I think most Americans are looking for something… novel, new, exciting and funny! And PSY is able to do all of that.”

K-Pop fan Tristan Medina agrees. “I feel like K-Pop isn’t a recent phenomenon, but is just getting popular now,” says the SF State senior. Medina who currently majors in Asian American Studies considers himself a K-Pop enthusiast, though distances himself from the term “hardcore” fan.

Like so many, Medina discovered K-Pop through the grapevine. “I got into the [K-Pop] scene through a friend,” says Medina. His friend had told him to listen to the song ‘Wedding Dress’ by Taeyang, another South Korean recording artist under YG Entertainment. Medina was sold after one listen.

“I did more research and found more songs and artists. I decided to branch off from there,” Medina says.

Similar to Medina, fans like Melissa Ha would have never discovered K-Pop without online access. “I can’t explain the phenomenon but I can say that K-pop definitely would not have spread like it did without the help of the Internet and YouTube,” says Ha, a human development major at SF State.

“K-pop success relies heavily on the Internet,” says Yoo, an expert on Korean American life and health. The success of PSY’s video came from incessant sharing on Twitter, Facebook, and other social networking sites. “YouTube and iTunes have changed the way we are entertained. We no longer have to rely on the television or mainstream record labels to cater to our interests,” she continues.

Earlier this year, YouTube broadcasted a free K-Pop concert hosted by Google and Korean broadcasting network MBC. As the sun set on a May evening, dedicated fans began camping out at the entrance of the venue early on, bundled in sleeping bags and struggling against the unusual chilly summer night winds. The lines elongated by the hour, and snaked around the venue as avid K-Pop fans from all over the country fought to claim their spot. After what seemed like an eternity, the doors opened, and like a moth to a flame, restless but eager fans swarmed and filled the seats of the giant tent. The music projected from the stage was almost matched by the audiences deafening and hysterical screams. Some fans jumped out of their seats from excitement while others stood in silence, starstruck as their favorite idol performed. The cameras panned across the crowd, focusing in on decorative fan-made signs. The camera zoomed in on a particular fan, who, with extreme precision, was mirroring the performers’ every move. Several hours and dozens of songs later, the concert ended, leaving the fans satisfied, but also hungry for more.

The concert, YouTube Presents MBC K-Pop Concert, took place at the Shoreline Amphitheater in Mountain View, California near Google headquarters and was held to celebrate content distribution agreement between Google and MBC. The companies’ partnership has made it easier for fans to access K-Pop content.

With a cult-like following in the west, there are multiple reasons why K-Pop has such an appeal and effect on its fans, especially to non-native Korean speakers.

“It is usually the beats of songs that hook me in first,” says senior Joseph Enriquez. Although the 21-year-old Asian American Studies major does not speak or understand Korean, he enjoys the genre primarily for its entertainment value and sound. “It definitely has its own sound that attracts listeners and is totally different from what we hear in the U.S. The music videos are also playful and fun to watch,” he continues.

Enriquez, along with 25 other members of the Alpha Phi Omega – Mu Zeta fraternity, performed in a Gangnam Style flash mob in front of the Cesar Chavez student center in September. The event took students around Malcolm X Plaza by surprise when the group rushed into the vicinity, as the addictive tune blared over the speakers. The crowd cheered on as the group recreated several of PSY’s dance moves as well as weaving in a few of original steps of their own.

“The decision of doing Gangnam Style was through word of mouth,” explains Enriquez. “It became obvious that this was the routine we were going to present to the school, because of its obvious rate of infection throughout pop media.”

Infectious indeed. K-Pop songs such as Gangnam Style are known for to have catchy beats and repetitive chorus lines to hook listeners. Korean record labels have established a formula to popularize their boy bands and girl groups. Apart from the music, the aesthetic aspect of a recording artist is key.

“I enjoy K-Pop so much because of the way the music sounds, not the girl groups,” jokes Medina. Medina enjoys K-Pop musical scores and the rhythm of the lyrics. He prefers K-Pop to a majority of mainstream American pop and hip-hop, which he describes as “off putting.”

For Ha, on the other hand, the appeal came from the variety of recording artists, boy bands in particular, that the K-pop scene has to offer.

“I grew up in the ‘90s and I really miss the boy bands and girl group scene that has clearly been on hiatus until recently,” she says. In addition, Ha admires the solidarity between fans. “The loyalty of fans towards a specific artist and group is strong. It also helped that I’ve met a lot of friends through loving K-Pop,” adds Ha.

Despite their love and dedication towards K-Pop, fans were pleasantly surprised by PSY’s overnight success.

“I did not know about PSY until just recently when I heard his song on the radio,” says Annee Mai, a senior child development major. PSY’s appearance at the Video Music Awards shocked Mai. “Many Korean artists try very hard to make it in the U.S., and for PSY, it seems like the opportunity just landed on him.”

“Something in the back of my head is really hoping that Americans like Gangnam Style for catchy beat and funny dance moves rather than it being exposed of as a joke,” comments Ha. Others believe K-Pop will be beneficial to the representation of Asians and Asian Americans.

“K-Pop is great for the image and representation of Asians and Asian Americans,” says Russell Jeung, an asian american studies professor at SF State who holds a doctorate in sociology. It’s especially helpful for Asian American youth, who have performers with whom they can identify.” Jeung wants to give Americans the benefit of the doubt that they can also understand the parody in PSY’s Gangnam Style, and avoid the conspicuous consumption promoted by most media.

Yoo, who has written books on Asian American issues, says she believes that K-Pop brings a new face to Asian Americans. “For that last one hundred years, Asian Americans have been seen as the ‘other’ in the entertainment business,” she says. “I think it’s beneficial for everyone to move away from viewing Asians as the other.” Yoo states that the rhythm and tunes of K-Pop can open up possibilities of how Asian Americans are seen by others. Furthermore this “fascination” will help open up minds and hearts to globalization.

“The phenomenon known as K-Pop only supports a positive image and will bolster’s the U.S.’s point of view of Asians in a good way,” adds Enriquez.

Student organizations on campus such as the Asian Student Union and Korean Student Association persist on straightening out the skewed view on Asian Americans. Mai, a former core member of KSA, states that KSA hopes to promote Korean culture. “Even though people may argue that South Korea is not only known for K-Pop, this phenomenon will always be a factor in Korean culture,” Mai states.

How much longer Gangnam Style will stay viral is unknown, but PSY and the rest of the K-Pop world has left the U.S. singing, “Oppa Gangnam Style.”