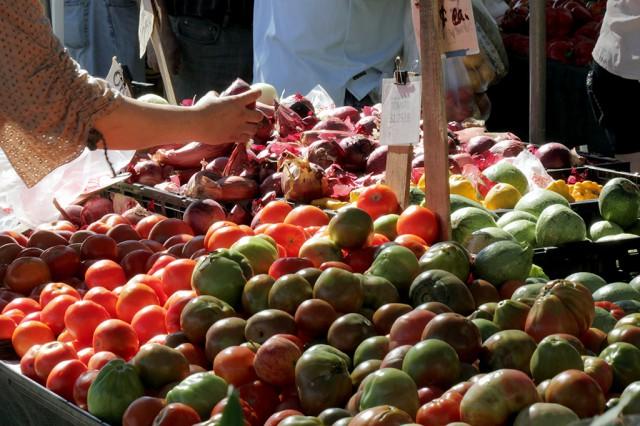 The sun has yet to awaken, but a sea of residents from the Bernal Heights neighborhood flood Alemany Boulevard farmers’ market with empty produce baskets, determined to find the best bang for their buck, until they overflow.

Conscious of the current economic downturn that has haunted our country for nearly five years, students have become intensely aware of the cost of food, all while trying to maintain a healthy lifestyle and avoid packing on the feared “freshmen fifteen.” The question that arises among many new shoppers is whether farmers’ markets are more or less expensive than chain stores like Safeway and Trader Joe’s, and even if you save money, do you sacrifice the quality of food when forced to buy in bulk quantities at large chains?

Regardless of their looks, the clerks at Whole Foods don’t have a say in the price of food. Even the ones with waist-long dreadlocks, plugs, and full-sleeve tattoos aren’t going to negotiate with you. But what about the Hells Angel-looking farmer-dude who stands in the setting sun with his pick-up bed still half full of produce aging in the twilight? Will he be willing to make a deal with you? Will he be receptive to your suggestion of fifty percent off in order to sell out for the day? Are you bold enough to bargain with him?

Venturing through the many markets scattered throughout San Francisco can answer some, if not all of these questions, but there are a few things students should take into consideration while doing their research. Just because an item at the farmers’ market isn’t certified organic, doesn’t mean that it wasn’t organically grown. The ambiance itself, oh so very European, may be what adds the quality of life in urban food-gathering culture. Price varies from farm to farm, and may change based on the time of day. Fruit and vegetable costs may follow the sun downward.

Another thought: Students may also want to note whether they can get everything they need and want at a farmers’ market. Can you purchase just one apple or do you have to buy a bushel? If you’re looking for packaged foods such as Kettle chips or dairy products, you might need to make a trip to the store like it or not.

At the corner of Alemany Boulevard and Tompkins Avenue, giant yellow and white commercial trucks, overflowing with crates filled with a rainbow of fruits and vegetables, crowd the perimeter of the market. Drivers carefully, but quickly, navigate their way through to find the nearest spot in the lot. The brisk air is filled with the incessant chatter of half-awake shoppers who eagerly await the week’s best finds.

“These carrots won the very highly looked-upon, Best Carrots of the Market award,” announces a worker at the Tomatero Farm booth proudly, as she hurries to arrange them in time for shoppers to take their pick. The bright orange carrots with long green, leafy stems are by far the largest at the market, and are guaranteed organically grown.

A few feet down the walkway a tall man with a full beard that covers the entire front of his neck, offers samples to passersby. Not quite green, but not quite red grapes are piled high on a table behind him.

“You have to taste these grapes,” he says. The sweet, juicy flavor that comes out of them is shocking compared to their dull, greenish-brown color. Everything at the market is fresh. “You’ve really got to taste [them],” announces a shopper as he walks by.

A farmer across the way draws attention to what looks like the world’s largest avocados.

“One bowl for eight dollars! This is a great deal,” he says. The table in front of him displays dozens of rich green, grapefruit-sized avocados. There are two in a bowl. “These would be great for making guacamole,” says a nearby shopper who is unable to resist.

Safeway, you still pay one dollar and seventy-nine cents for a pound.

The sun has finally made its appearance and begins to warm the crowd as it rises higher in the sky. An eager young shopper, dressed in a striped shirt, jeans and flip-flop sandals, is excited to find fresh ginger. He announces that he has never seen it priced so low before. The farmer quickly erases the chalkboard, increasing the price before anyone notices.

“I must have it priced too low,” he says.

Aside from the farmers who hastily arrange produce, change prices, and tend to customers, no one else seems to be in a hurry. Everyone is friendly and smiling here. Dressed in a light blue tank top and jeans with her hair tied in a ponytail, Amrita Emily Rumberger, a w

orker at the Bluehouse Farm booth, looks up and smiles.

“Farmers’ markets guarantee access to amazing quality produce, and it’s affordable,” she says. “The best part is the personal service,” chimed in her co-work

Simone Shifnadel, owner of Zenbelly catering in San Francisco, enjoys being able to speak with farmers face-to-face and ask exactly what was used to grow the produce she buys.

“I noticed that the food at farmers’ markets is just so much more beautiful,” she says. Shifnadel buys all of her produce from the Stonestown farmers’ market, weekly. “[It’s] better because it’s fresher,” she adds. “Sometimes I forget about lettuce I bought at the market and it is still fresh a week later.”

Sunday afternoon, the Parkside neighborhood is in state of what seems to be a torrential downpour, but the red and white sign still points toward the farmers’ market in the parking lot at Stonestown Galleria.

“Farmers’ market today!” is written in giant red letters. White tents line the walkways as farmers and shoppers huddle inside to negotiate prices. It’s later in the day and farmers are offering up deals.

“I see you every week,” says a farmer to a middle-aged woman who scours the selection of iceberg lettuce for the best head for sell. “I’ll throw in some kale for free.”

It’s this community element that draws some people to the market. For others, it’s about being aware of what’s going into the body.

There is only one way to be sure of what you are eating, according to Shifnadel. “It’s simple,” she says. “Eat real foods.”

By “real foods,” she’s saying foods that aren’t processed. That means no Twinkies or Hot Pockets — ever. Taking a look inside Shifnadel’s grocery bag can give a better idea of what these “real foods” are — lettuce, kale, and broccoli just to name a few. “You never have to ask what an apple is made of,” she says.

That is why she, and the throng of others at the farmers’ market choose to do their shopping here — so they know just where their food comes from. Looking for one in your neighborhood? Here’s a list to help you find your local market.