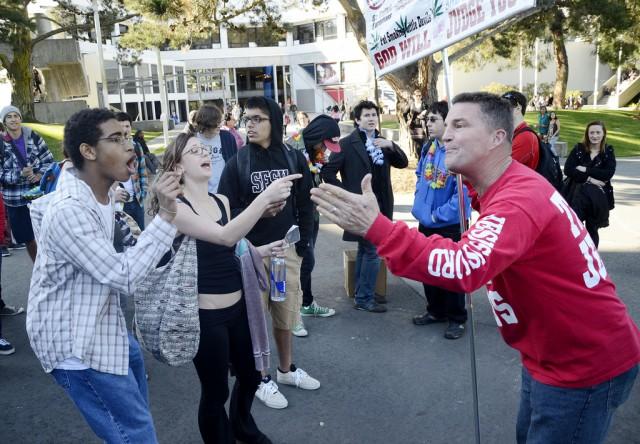 Shakir Muhammad, a Muslim 18-year-old computer science major and Katerina Walter, a 25-year-old criminal justice major, fight back against Cry to God's Kevin when he said, "Muslims go to hell" at Malcolm X Plaza. Cry to God was at SF State speaking about its beliefs on Thursday, Feb. 14, 2013. Photo by Virginia Tieman / Xpress

“You guys love sex,” Kevin Farrer says matter-of-factly to the crowd, his grip tightening on a large sign on a post with multicolored words printed neatly on it. There are a few shrugs and nods from the surrounding crowd at his opening statement.

“You worship sex,” he adds his tone more accusatory this time. A high whoop comes from somewhere deeper in the crowd. Farrer shakes his head and lets out a bark of laughter. Farrer wears red. The message of “Trust Jesus” is emblazoned in white block letters on the front, back, and down the long sleeves of his red shirt. In his hand he clutches a red wrapped condom. Oddly, it matches his ensemble perfectly.

One immediately gets the impression that Farrer would not be the amused by the comparison.

“Don’t you understand how stupid you are?” he crows. “So I point you to Jesus Christ so that you may be delivered from the lust.” He punctuates this last sentence by flicking the condom to the ground with the air of flicking off an over-dry scab.

Kevin Farrer is a street preacher, a confrontational evangelist, and a messenger of god’s word, and kind of an asshole, depending on whom you ask. As part of his group, Cry to God, Farrer seeks to spread the word of his higher power to anyone who will listen, particularly those who don’t think they need to hear it.

“We desire people to hear the gospel,” he says. “We want people to come to the knowledge of the truth.”
He shrugs and says in a voice that is raspy and soft “we believe faith comes by hearing.”

“The novelty of the thing had a moving affect.”

“It was regarded by most persons present, if not all, as a very dangerous experiment; for the gamblers were powerful and influential in the city and the Plaza was their principal rendezvous.” By his account the gamblers and the drinkers did not harm him. “The novelty of the thing had a moving effect,” he says recounting how “the people crowded out of the gambling houses and gathered together from every direction as thought hey had heard the cry,’ Fire! Fire! Fire!” After that sermon, Taylor spent seven years touring the “highways” of California and reports that he never “suffered any serious disturbance.”

Jesus and the Harlem Shake

Such was not the case on Valentine’s Day with Farrer.

Amid a particularly stirring lecture on “the evils of homo sex” Farrer is interrupted by a shout from deep in the crowd.

“Do the Harlem shake!”

He rolls his eyes and continues on.

Nearby, Brittany Johnson, biology major sighs and shakes her head. “He makes Christians like me want to go in a hole and hide.”

“Christianity doesn’t mean we just take people to church, we take the bible to the market place,” says street preacher Ruben Israel. Israel has preached, somewhat infamously for 30 years. He, like Farrer is a fan of large incendiary signs,”Hell awaits you,” and “homo sex is a threat to national security ‘among them.’ If we just stood by a table people would walk by,” he says in response to the negative attention his signs sometimes receive. “We’re gonna take the bible to the college campuses, the places where people don’t go to church so they can know what God says about a particular topic.” Israel, who has been arrested several times while street preaching, calls himself the “Rodney Dangerfeild of preaching.”

“I get no respect!” He chuckles.

College Campuses Are The Pits

In the words of publick(sic) minister, Gerald Sutek “college campuses are the pits.” Sutek has been involved in publick ministry for forty four years both in the U.S. and in the Philippines and says that college campuses are a particular bane to the street preaching community. “The students today have been programmed into a box” he says. “None of them ‘think’ anymore. They are all lovers of pleasure more than lovers of God.”

Back in the quad a student in a lilac polo and sunglasses is berating Farrer for a hug. “C’mon man just hug me!” the man says, inches from Farrer’s face. Farrer snorts with disgust “I don’t hug other men I hug my wife!”

The student then hugs another male student passionately in front of Farrer to cheers of raucous applause from the lookers on.

When pressed the student, Kevin Defranco, admits, “I’ll just be honest with you, I’m just drunk I could give a fuck less about this guy.” He eventually stumbles off to ask Farrer loudly to be his facebook friend.

This is exactly what drives Sutek mad,” I find myself longing for a reasonable man to mentally banter with…but I find NONE. You would think that college campuses would provide that but they seem to go the other direction in this area.”

The trick seems to be to get people to listen.

Israel presents this metaphor,” We live in a society where people have forty to fifty channels on the T.V. and still say ‘there’s nothing on TV.’” He continues, “You have to toss something out to get a response.”

According to Israel, “to preach means to raise your voice and yell in a tiresome manner.”

For some students in the quad on Valentines Day, the methods used were more tiresome than the preachers themselves. Ryan Simon, a senior political science major, says he respects Farrer’s and his colleagues right to be there. “They have a right to free speech, I don’t have a problem with them being here,” he says. “Right now though, it’s just a spectacle.” Simon filed a complaint with the campus police a few hours earlier, citing Farrer for harassment saying the group “crossed a boundary.” The University Police sit astride motorcycles at the outskirts of the scene, watching. “Free speech,” shrugs Officer Bautista “They come here every two to three months, we just make sure no one gets hurt.”

“People tried to tell them God loves you,” says Israel in response to the query that the more “shock and awe” evangelism might give people the wrong impression of Christianity at large, “but a big burly guy with signs is harder to ignore.”

Farrer agrees that the soft option is not always the best approach. “Jesus loves you,” he says in a mocking singsong before laughing and adding “Jesus is going to throw you in hell, how much love is that?”

Lawrence Dubois, a seven-year veteran of street preaching who was once a colleague of Farrer’s takes a different approach to spreading his message. “I don’t believe in doing something outrageous,” he says “the means don’t justify the end that way.” He identifies Farrer’s belief that the gospel is watered down as a common one among his peers. “But sometimes the pendulum swings too far the other way,” he says, referring the groups more incendiary tactics.

Dubois, currently an Oakland resident, says that when he street preaches he tries to “represent the character of Christ.” He feels that the message of the religion is “offensive” enough without sensationalizing it. “The gospel demands righteousness,” he says. “And men love darkness more than they love light.” Dubois says he shies away from message emblazoned shirts or signs and instead opts for common clothes or even the occasional suit and tie. He questions the methods of the more fire and brimstone inclined of his peers,” You want to present Christ in the best way possible because the bible says we are his ambassadors.” He says sensational street evangelists play into the stereotype of a “used-car salesman” and that they help reinforce the “Stigma” against street preachers in general.

Dubois says that he doesn’t “resort to calling people names or trying to enflame them”. He says he normally sets up his pulpits in poorer areas where his message of faith might bring hope to the community. He admits to being shy about public speaking at first and believes this weakness may be why God chose him for the task in the first place. Street preaching, he says has given him a lift like he’d never felt with anything else “If public speaking causes butterflies, open air preaching causes helicopters,” he says.

Back at Valentine’s Day, Farrer is looking for a similar lift. Faced with crowds of loud students and naysayers, he smiles and says conspiratorially “God works in supernatural ways, and maybe something I say today will give someone a revelation later. I’m not looking for you to walk up and accept the Lord, I’m just trying to get you to think.”