Dance The Night Away 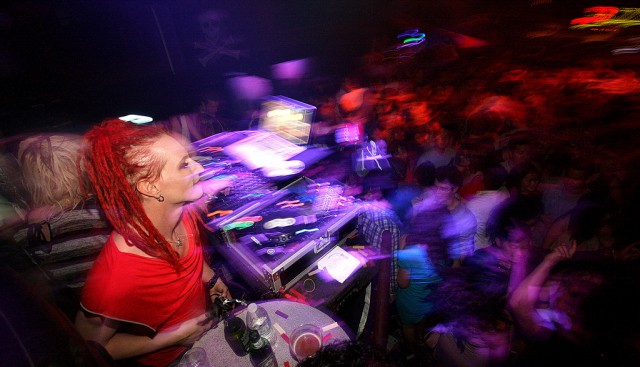 Bootie is the best dance party in San Francisco. That’s a fact.

The weekly mashup party is held every Saturday at DNA Lounge in SoMa. But “Lounge” isn’t entirely accurate. The place is massive, and each week’s party is appropriately massive as well. The music continues far after the 2 a.m. last call, and it’s the music first and foremost that truly sets Bootie apart from any other club night in the city.

Mashups. It’s all about the mashups.

Knife Party meets Oasis. Psy meets LMFAO. The Killers meets Guns N’ Roses. M83 meets Rihanna. David Guetta meets the The Proclaimers. Ke$ha meets Mumford & Sons. The list goes on and on. There’s something for just about everyone, and it all sounds great.

“Why go to a party and dance to one song, when you can dance to two—at the same time!” Truer words have never been spoken by Bootie founders A Plus D, aka DJs Adrian & Mysterious D, aka Adrian and Deidre Roberts. The duo started Bootie in San Francisco in 2003, and the event has since risen to fame as the biggest mashup party on the planet.

“We’re a celebration of pop culture,” says Adrian. “Not just top forties—just all pop music of all genres from the past fifty years.”

No dress code. No douchebag bouncers. This is not a club. This is a party.

“We’ve always thought of Bootie as a party, not a club,” says Adrian, “and we started it just by playing mashups for our friends in our living room. And it still feels like we’re doing that.”

The clock strikes eleven and Jim Sweeney aka Emcee Kingfish of The Hubba Hubba Revue takes the stage to commence Bootie’s monthly burlesque performance. This time, the lovely ladies of Sin Sisters Burlesque strut their stuff for the eager audience. First up is Valerie Veils. She comes out dressed in bright blue lingerie while DJ Adrian spins an electro mashup of Mumford & Sons’ “The Cave.” As she removes her top, she covers up with a neon green feather boa, and the crowd erupts in roaring applause. Those in the front row hold up dollar bills and toss them on stage, motivated by Kingfish’s one rule: “Just put in the tip!” Some even toss twenty dollar bills on stage. A handful of other performers each take their turn putting on a show, including an aerial silk performer who stuns the crowd with her impressive acrobatic moves.

Brief, live entertainment is a staple of Bootie, so Emcee Kingfish makes sure to bring as much energy to each show as possible.

“The Bootie audience is amped up, and after more than nine years of spectacular parties, they have high expectations,” says Sweeney. “You cannot phone it in at Bootie—you need to go out there and instantly go big!”

Once the show is over, DJ Adrian tosses out free mashup CDs to the crowd before blasting Baauer’s popular “Harlem Shake,” the crowd runs on stage, and the real party begins. The massive main room of DNA Lounge is packed for the rest of the night, and the mashups are in full effect as A Plus D run the show.

Upstairs in the “Lounge” room,DJ Meikee Magnetic’s Glitterazzi, featuring himself and Mixtress Shizaam, amp up the crowd with their hard electronic dance music. Their monthly third Saturday residency at DNA Lounge makes for some of the most exciting and energetic Bootie nights. Pungent fog machine vapors fill the room as crowd members dance their asses off to Glitterazzi’s booming bass, exciting buildups, and satisfying drops, played through a loud Pioneer sound system that’s suspended from the ceiling. From house to dubstep to mashups—it’s all things hard electronic when it comes to Glitterazzi, and the crowd loves it all as they cheer and dance the night away under the colorful strobe lights.

“The harder the music we play, the more the crowd loves it,” says Meikee Magnetic.

Around the corner, DJ Mykill provides a mellower electro groove in the smallest room at DNA Lounge, “Room Four.” The walls are lined with mirrors, the dance floor is compact, and there are black leather couches in the back of the room where people get freaky. Other weeks, different DJs take over both upper level rooms, but Bootie always offers at least two rooms of music in addition to the main room mashups.

Regardless of music taste, practically everyone can find something to enjoy at Bootie, and thus the crowd is as diverse as it gets. Men and women of all ages (21+), all ethnicities, all genders, and all subcultures gather at Bootie for one reason: to dance like nobody’s watching.

“The Bootie crowd is the true heart of San Francisco,” says Meikee Magnetic. “You have every flavor there united.”

“I think the nature of Bootie requires its audience to be open-minded,” says Adrian. “We’re totally messing with music— other people’s music. There’s not this preciousness to it.”
The diversity of the music lends itself naturally to the diversity of the crowd.
“People don’t listen to just one genre or style anymore,” says Mysterious D. “All of these different, diverse types of people come together.”

By midnight, the weaklings are flushed out of the venue, usually by their own failing digestive tracts. Mysterious D attributes this to a combination of “Bootie’s silliness and DNA Lounge’s strong-ass drinks.” Out front, a young woman projectile vomits next to a blue Toyota Camry. The watery mess pours heavily like a waterfall and connects with her friend’s pink dress and shoes. The friend is outraged, but two gentlemen nearby flock towards the puking princess, eager to make a new friend. She is just one of many stumbling patrons who simply could not hang. The first rule of partying hard is to party hard in moderation. The real party animals remain inside, prepared to dance the night away until well-after 3 a.m.

This is more or less a typical Saturday night at Bootie, though Adrian admits it “was a particularly crazy one.”

Despite the wild weekly parties, there’s never any real trouble at Bootie as far as Arlo Kirschner is concerned. As a “bouncer” at DNA Lounge, the burly man, towering over most others at 6’6”, has never had to do any actual “bouncing.”

“Not counting handshakes, hugs, or making my way through a crowd, I basically never actually put my hands on anyone,” says Kirschner.

“My job is to make sure everyone at the party is having as much fun as possible,” he says. “I chat, socialize, flirt a bit, and generally keep an eye out for ways to be helpful. I’m basically DNA’s version of what other clubs refer to as a bouncer, but we tend to function a lot more like hosts.”

At its core, Bootie is about mashups. But there’s more to it than just the music. It’s a mashup of people, a mashup of cultures, a mashup of lifestyles. As a result, an entire mashup subculture has been created and is now prosperous not only in San Francisco, but across the globe.

“It’s a worldwide phenomenon that’s only going to get bigger,” says Meikee Magnetic.

Since its founding in 2003, Bootie has made its way to many cities throughout the nation, with regular events in Los Angeles, New York, Boston, Seattle, and more.

”When we brought Bootie to LA and Manhattan,” says Mysterious D, “what people fell in love with is that— while these big club cities can sometimes have these pretentious, serious music and nightlife scenes— Bootie is a place for them to be themselves, let their hair down, and just get crazy.”

Bootie has also gone overseas to four other continents, including Europe. London, Paris, Berlin, Munich, Budapest, etc. These cities are the cream of the crop worldwide when it comes to nightlife and late-night partying. Despite their best efforts, most American cities can’t hold a glowstick to these European powerhouses when it comes to nightlife. Yet, A Plus D have managed to turn the tables and bring their San Francisco party to these majors cities to show them that San Francisco knows how to party. Hard.

“[Bootie] San Francisco is the mother ship,” says Adrian. “It’s the biggest party. It’s the only party that’s weekly. But it’s something that we slowly, organically built up too. If you told us nine years ago that Bootie would be a weekly party, we would have laughed.”