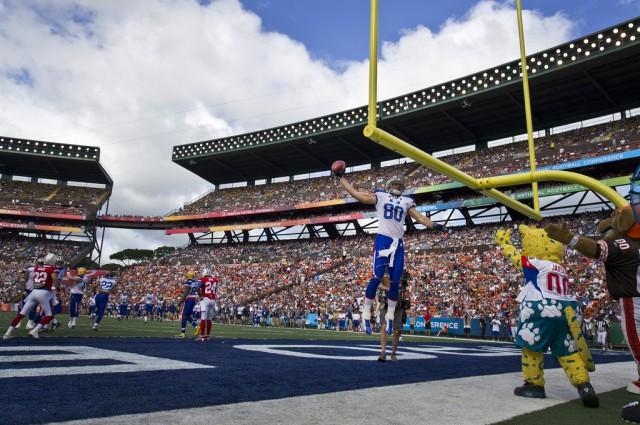 The NFL has finally put their foot down after years of watching players like Chad Johnson and Terrell Owens party like its 1999 in the end zone.

The NFL has cracked down on taunting this season with the reinforcement of several rules that will essentially prohibit players from celebrating anywhere outside of the end zone—and even there their options are limited.

Good riddance! Why players felt compelled to taunt their NFL brethren in the first place is beyond me. Men have feelings. Just because some men are oversized juggernauts that get paid large sums of money to play a sport doesn’t make them inhuman.

Do they not bleed? Are they incapable of weeping like the rest of us!?

Bravo Commissioner Goodell. It’s good to know that amongst the plethora of problems facing the NFL at the moment—PED testing, player safety, concussion lawsuits, expanded seasons, etc.—that the league has still found time to address this very pressing issue.

The rule outlines what will be penalized, and includes “sack dances, home run swing, incredible hulk; spiking the ball; throwing or shoving the ball; pointing; pointing the ball; verbal taunting; military salute; standing over an opponent [prolonged and with provocation]; or dancing.”

Wait a tick, did it say dancing? Dancing, as in one of the few things left in the world synonymous with happiness?! Does that mean I may never see something like this again on a football field?

Well, not exactly. The rule actually prohibits players from doing any of the aforementioned celebrations towards an opponent. As such, players are free to celebrate within the confines of the rules so long as they’re not trying to antagonize the opposition.

It was just seven years ago that the league first banned props and group celebrations, as well as the “throat slash; machine-gun salute; sexually-suggestive gestures; prolonged gyrations; or stomping on a team logo.”

Now, I know what you’re thinking. Doesn’t this rob the NFL of some much-needed entertainment and—dare I say it—fun?

“It’s bad for the game,” says football fan and bar hopper Alex Robershotte as he takes a break from the delicious Cheesestake and Sunday Night Football game ahead of him. “I think it’s a natural reaction to celebrate. If you succeed at what you’re trying to do, and you have to be held back from celebrating from that, I think that’s absolutely absurd. And when you’re an athlete who’s amped up on adrenaline, you’re gonna go all out in your celebrations.”

For shame. Are we forgetting about those most affected by the celebrations? Lest we forget that the NFL is not the WWE. Players get paid a lot of money to perform their duties to the best of their abilities and shouldn’t be subjected to such public humiliation as this when they get burned on a fly route:

On the other hand, maybe everyone should just chill the fuck out and put everything into perspective.

Football is an inherently emotional sport played by some of the most competitive athletes in the world. Naturally, they’re going to do whatever it takes to gain a competitive edge. That includes getting inside the head of their opponent.

Sack and touchdown celebrations add a layer of untapped entertainment to the league. Guys like Terrell Owens and Chad Johnson were watched not only for their remarkable talent, but because you never knew exactly what they were going to do when they found the end zone. One thing you could always be assured of though was that it would be fun to watch.

The days of watching an NFL lineman breakdance, a quarterback moonwalk, or a wide receiver make untimely phone calls from beside the pylons are in the rear-view mirror now. All that’s left to look forward to is this:

“The rule is kind of ridiculous,” says San Francisco State student Jeff Palin. “I don’t think the celebrations were really hurting anyone. And I’m not sure why the league even felt that it needed to take action.”

The reasons behind the crackdowns are unclear. Perhaps the rule was instituted to protect the NFL image. Maybe its purpose is to keep angry players from inciting a brawl. It’s possible the league was fed up with diva wide receivers disrupting the flow of the game and shifting the focus from the competition to some over-the-top spectacle.

Maybe it was a combination of all three.

Regardless, fans are left wondering if the rules are even necessary.

“You don’t really see anything exciting anymore when someone scores a touchdown,” says San Francisco State student Andrew Newlee. “Some of those celebrations were hilarious. So yeah, I kind of miss them.”

At the end of the day, football—despite being a multi-billion dollar industry—is just a game.  Someone ought to remind the Commish about that, because at the moment he’s robbing the league of some free and much-desired entertainment, and appears petty in the process.

For example during the preseason, the Jets third-string quarterback Matt Simms simulated that he was firing a pistol, and the NFL fined him $7,875 for the infraction.

For starters, how did the league come up with such a puzzling and specific fine; and secondly, did the crime really fit the punishment?

These rules are hurting the sport, and compelling fans to deem the NFL the No Fun League.

The celebrations are amusing. The only people they’re hurting are those being taunted. If they don’t like it, then they should get better at their jobs. Until then, they should bite their lip and set a good example for the kids watching.

I’m not advocating malicious taunting. Watching someone viciously sack a quarterback, stand over him and talk shit is never a welcomed sight. But something as simple and harmless as this (which was fined $10,000!) should never be penalized.

So think it over, Goodell. I know you care about the players (or at least that’s what you like to let on), but don’t go overboard here. Loosen up and just let everyone be themselves. Until then, here’s a little something for old time’s sake.