If the glowing yellow walls could talk, they would echo every story uttered in broken tongues. The walls are silent today, but every first Friday of the month, the multitude of stories told over Hip Hop instrumentals along with the low hum of acoustic guitars breaks through those walls and out onto the streets, where poetry smells like the trailing aromas of hot tortillas and carne asada mixed with weed smoke. 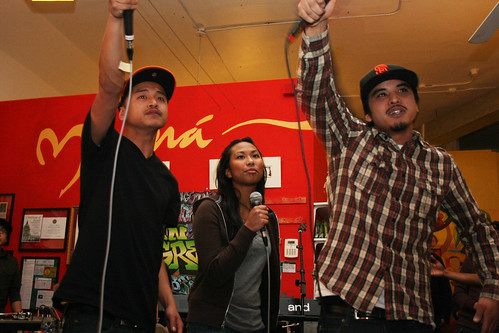 For decades, a vibrant literary arts and open mic scene has flourished in San Francisco. From the beat poets at City Lights bookstore howling at the moon to the Chicano poets on 24th and Mission streets reclaiming history forgotten, the spirit of the open mic has never been more alive, especially in unknown enclaves of San Francisco, like the Excelsior District.

The Excelsior District is located barely beyond the city limits of the Mission District— one of San Francisco’s more popular and well-known neighborhoods. Southeast of the more affluent West Portal neighborhood, and southwest of Bayview Hunter’s Point. Graffiti like hieroglyphics glare honestly at passerby, telling visceral stories of a neighborhood that is not usually recognized.

In Progress Open Mic, a social-justice centered open mic is created by community organizer and SF State alum Anthony Navarro. He attempts to change the perception of the neighborhood, rarely covered in the media unless the stories are about crime. Every first Friday of the month at Mama’s Art Café, between Leo Street and Russia Avenue, the unbounded creativity from Excelsior residents, particularly “at-risk” and immigrant youth, fill in the space where silence used to be.

He is sitting uncomfortably on the floor in the cramped children’s section of the bookstore. Against the backdrop of brightly colored and overpriced stuffed animals and disheveled books, he stands out in his modest brown ADIDAS zip up jacket and tan paperboy hat. “My parents were both immigrants so there was a generational disconnect,” Navarro says. “I grew up in a broken household and faced issues of domestic violence and criminal activity. My siblings and I learned how to survive in extreme abuse.”

Navarro’s own life reflects many of the youth he works with as the youth program coordinator for the Filipino Community Center (FCC) in the Excelsior District. The straight line on his lips turns into a slight smile as he reminisces about the Hip Hop community that shaped him.

“Hip Hop has always been around me and the culture has been present in my life for a long time,” Navarro says. He discusses his move from San Diego to San Francisco in 2005 and connecting with the Hip Hop community in the Bay Area and realized that many of the immigrant youth in San Francisco had little support and access to resources.

“Nobody was building with the youth,” he says. “I connected with the youth because I was determined to connect with them. I spent every day at the FCC getting to know them, even though I could not speak Tagalog. The language we would communicate in was Hip Hop.

Kristen Sajonas, 28,  sits with her legs crossed on the old couch that once resembled the color gray as her rebel tongue recites the the history of the literary arts scene in the Bay Area that she was surrounded by. Her brown tousled hair and crooked septum ring do not distract the years of poetry history she has memorized by heart. She is one of the main organizers for the Asian and Pacific Islander Poetry Summit that occurs every two years in different parts of the U.S. 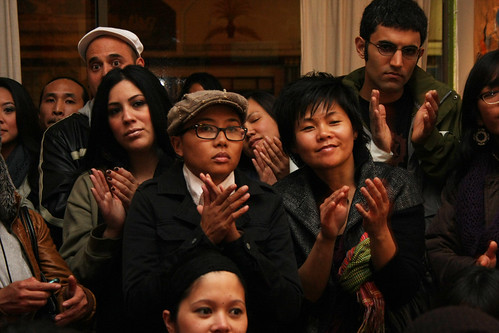 “I was always writing as a kid, but then I started to share my work and realized there were other people writing in high school,” Sajonas says. “Spoken word started becoming cool and I think it was greatly influenced by hip hop and the rejection of mainstream culture.”

According to Sajonas, the open mic and strong poetry community in the Bay Area has served as a transformative space for dialogue, healing, and reclaiming personal and collective histories.

“Poetry takes a lot of different forms, but the craft of writing is arguably the most important thing,” she adds. “The bottom line is that sharing is important. Just as long as [the writing] is communicated, that is powerful in itself.”

Every first Friday of the month, the small and colorful cafe becomes home to a diversity of young people’s stories whose topics range from ex-girlfriends to various every day survival  stories about rape and sexual abuse. 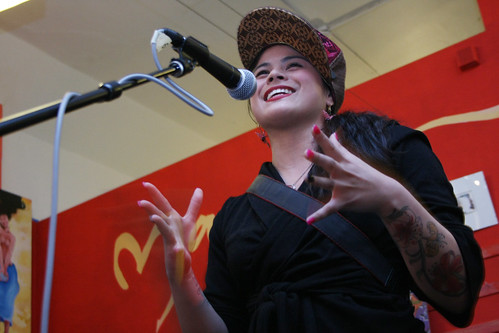 “Every culture has some sort of storytelling nature. The point is to be able to harness our oral histories and apply them to the conditions in which we live,” Sajonas says. “To use and control your own voice is especially powerful for someone who has felt like they don’t matter.”

According to organizer for In Progress, literary arts and poetry,  Ed Jr. Arimboanga, 23, open mic is an important for “at-risk” and immigrant youth because it provides a space that is free from rigidity and scrutiny.

“At In Progess, anybody of any background can grace the mic with whatever is on their mind and more importantly, the audience is always more likely to applaud, cheer, and embrace that person’s performance, no matter what it was about,” Arimboanga says.

His gray and white streaked slick back hair is stiff as he lectures enthusiastically in his class at SF State. His arms flail in excitement and his youthfulness is evident in wide eyes and sly smirk. Oscar Penaranda, 66, has been active in the literary arts scene in San Francisco and the Bay Area since the student strike at SF State occurred in the late 1960s.

Penaranda is an SF State alum who now teaches in the Ethnic Studies department. He has been published in several poetry anthologies like Field of Mirrors and Seasons by the Bay, and his own book of poetry entitled, Full Deck (Jokers Playing).

“Poetry and oral storytelling keeps a person’s self worth intact and gives you a voice to free and liberate yourself,” Penaranda says.

According to Sharim Hannegan, 21, an SF State alum and frequent participant in open mics, for a long time, poetry and the open mic have been part of a larger literacy movement. She also discusses the political ways poetry has been used in Arizona to resist the anti-immigrant bill known as SB 1070.

“Being able to write down your history is monumental,” she says. “Some of our histories are so rarely documented except in the tongues of our families. The poetry scene provides a space for people to reclaim their voice when other institutions don’t give them a space. Open mic spaces allows you the space to reclaim your humanity.”

He remembers the first time he met the now 19-year-old former Galileo High School student who suffered from being bipolar a mental health problem. After working with him day in and day out at the FCC even on the harder days when the former high school student wanted to fight him, Navarro understood the importance of pushing youth to their potential and providing them with a safe space. He recalls those harder days much easier now as he closes his eyes and smiles thinking about the 19-year-old who has become a regular participant at the In Progress Open Mic. “He raps off beat sometimes,” Navarro laughs, knowing very well what it feels like suffer as a young person who is lost and silenced, with no outlet to speak.

“Because we are so powerless economically, institutionally, and politically, to use and and control our voices in a way that serves us is amazing,” Sajonas says. “Being able to speak is a very basic but powerful act for young people who are scared of their own voice or think that what they have to say doesn’t matter.”