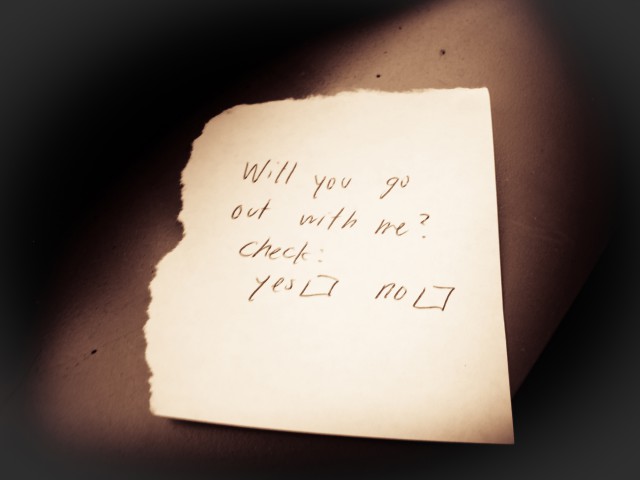 Written and photography by Matthew Reyes

When I’m attracted to someone of the opposite sex, the first impression I make is always horrible. When the recipient comes within the radius of my awesome charm, or lack thereof, whether it be on campus, work or at a bar—minus the booze because face it, I’ll have a conversation with Scarlett Johansson without breaking a sweat—I begin to manifest familiar symptoms, most of which indicate that I’m having a mental breakdown of some sort.

Simple statements such as “Hi” or “How are you” are lost in the vast ether of my mind. Once I asked a woman at a club, “May I buy you a drink, m’lady?” M’lady? Who am I, Jon Snow from Game of Thrones? Even he has better luck than me.  I forget how to stand correctly and start leaning on things that are not even there. And for some reason, I do this god damn gun-and-wink gesture like I’m Clint fucking Eastwood in Gran Torino. What the hell is that? Every ounce of my being is telling me, “Don’t do this and go home and jerk off or something.” But I still do it. I’m a train wreck, but I wouldn’t want to meet a woman any other way.

The era of meeting someone organically has long gone. Traditional courtship—such as the prehistoric action of meeting someone at a coffee shop, a crowded bar or (God forbid, should I say it?) calling someone over the phone and getting to know them—is close to extinction. Today most people use social media dating networks, such as Tinder, OkCupid, and Match.com, and setting up meetings without setting eyes on their dates first. Small talk has been replaced by gesture swipes left or right on our smartphones; the art of reading social cues is switch with which emoticon works best for seduction. It’s true that online dating has probably increased the number of success rates of dates. But, we’ve lost something essential that came with old-fashioned courting.

“In the context of dating, it removes much of the need for charm,” says Alex Williams, writer for The New York Times. “It’s more like dropping a line in the water and hoping for a nibble.” It’s easier than ever to ask someone on a date through text or any Internet messenger for that matter. We can send a message and wait for a response back. It’s a pass-and-catch way of communication. Yet when you ask someone face-to-face, or even over the phone, you’re actually in direct contact with each other – and during the slight bit of silence between your question and his or her answer, it takes courage to hold on tight and hope for the best.

For the sake of anonymity, I’ll call her Elizabeth. Elizabeth was awesome, incredibly funny, a horrible dancer—which was endearing because she knew and didn’t care—and sweet baby Jesus blessed her in places I liked to look at. Elizabeth and I would go bars with our group of friends, and we gravitated towards each other. By the end of the night, she was in my arms heading to a late-night diner.

I was into her, and I thought we could go out just the two of us. It took me awhile to muster enough courage to call her over the phone and just, well, ask her out. Pacing back and forth in my room, I thought to myself, “What’s the worst that could happen?” So I took the leap. While I waited for her to pick up, I envisioned our date before it ever happened. I would pick her up in my Toyota Tacoma truck and open her door for her. She says, “I didn’t know your truck was manual, can you teach me one day?” I would say, “Yeah, for sure,” in a sultry deep voice like Denzel Washington or the spokesperson from the Allstate commercials. I take her to a hip restaurant where servers adorned with suspenders and fedoras serve dishes like bone marrow with organic kale and offer drinks in mason jars. Then we would walk downtown getting to know each other’s family, find out if we like cats or dogs (for the record, cats scare the shit out of me), and reveal our special talents, like my innate ability to beat anyone in Street Fighter 2. She makes fun of me, and I flirtatiously nudge her on the side. Afterward, I take her back to her apartment and walk her to door. We stare at each other for a second, waiting for the next move. Then she kisses me, tells me to call her later and runs inside to tell her roommate about our date. I walk away from her door like a gangsta! Snoop Dogg has nothing on me! Then I do an Andre Agassi fist pump like I just won the Grand Slam. Animated bluebirds land on my shoulder and Val Halen falls from the sky to add a solo to cape off my awesome night. I end it with a high five to Halen and walk off towards the horizon.

However, my daydream faded away, and my fantasy of our first date quickly dissipated when she graciously declined. Later I would find out she just started to date a tall gentleman that looked like he should be a NFL wide receiver. Who could compete with that? But the point is that I tried face-to-face—or face-to-phone—and for those seconds between my question and her answer, I felt a concoction of emotions—fear, anxiety, hope, and courage—stirring within me. I felt alive.

It requires some true grit to put yourself on a limb, not knowing if the person will say, whether it be yes or no. But, it’s one of the things people need to experience in their life instead of hiding away behind an online persona.

Louis CK said it best in his stand-up, Oh my God:

“I’m always happy when I see a couple on a date ‘cause it means people are still trying, you know? It means there’s still courage out there. That takes courage, to go on a date, for both sides. Two very different kinds of courage: The male courage, traditionally speaking, is that he decided to ask. He went up to a random woman, who he has no idea if she’s gonna like him or not, and he walked up to her terrified.”

Yes, it’s terrifying. Yes, there may be times where rejection is the only viable outcome. Yes, they might laugh in your face. However, if that person says yes, the Andre Agassi fist pump will come out. So, how about that drink, m’lady?