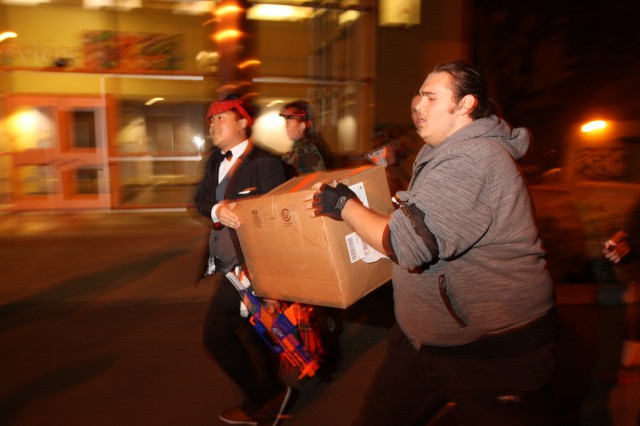 Steven Benitez (right) carry a box to complete a mission during the Humans vs. Zombies season 3 opener, 'Return to Night,' Oct. 23, 2013. Photo by Tony Santos / Xpress

Zombies. Walking corpses that feed on the flesh of the living. These undead monsters have been used to symbolize basic primal fears like death and disease, as well as more modern-day anxieties like consumerism and loss of individuality.  Ever since George Romero released Night of the Living Dead in 1968, the zombie has become a pop culture juggernaut, appearing in forms of media ranging from books to comics to video to movies to television. Books about surviving the zombie apocalypse have become New York Times best sellers. Legion of the undead movies and video games rake in hundreds of millions of dollars. The Walking Dead, a television show based on a comic book about zombies is the most-watched drama series telecast in basic cable history. Whether it’s through admiration or just plain obsession, even college students in the United States have developed games of Humans vs. Zombies. Just Check the official website. Like the reanimated corpse itself, the concept has spread its way across campuses—including San Francisco State University—and has sunk its teeth into the hearts of students.

The basic premise of the game is to simulate a zombie apocalypse. Usually played over the span a week, students are assigned missions to accomplish, not knowing if their friends, classmates, or roommates could be a zombie in wait, ready to strike at anytime, anywhere, with the sole purpose of adding another monster to the undead army.

Inspired by games held at other colleges, San Francisco State University students Nathaniel Dizon and Ricki Herrera decided they were going to bring their own version of HvZ to SFSU.

In October 2011, the duo held their first game of HvZ. Since then, they’ve hosted more than a dozen games on the SFSU campus with scores of people attending each game, sometimes as many as 80 HvZ goers.

Played over the span of several hours on a weekend, their game is more reminiscent of a Civil War Reenactment than a game of tag.

Generally, there are two teams, the humans and the zombies. Humans are gifted with weaponry, usually in the form of Nerf guns that fire foam darts and similarly

foamed swords. These have proven so popular that Nerf has begun making a special Zombie Strike line of weapons. The zombies, on the other hand, benefit being virtually unkillable and constantly reanimate after being shot or struck with foam weaponry, as well as amassing a larger horde with every human killed.

However, more personally for the SFSU game, the moderators are in charge of building the world and the rules. With the expanding number of players, the number of moderators has expanded as well. Moderators Adam Benigno, Fernando Herrera, Jamison Chow and Lisa Olson have all brought new flavors and ideas to the game. These changes have come in the form of expanded human weaponry like Riot Shields and a Bazooka– colloquially called the BFG– as well as a plethora of new “special” zombies that keep the game dynamic and interesting.

Generally, the moderators try to design the missions around a larger narrative, like survivors trying to escape a zombie-infested city. This most recent game, affectionately titled “Return to Night,” involved a mad scientist and a chunk of plutonium woven into the story of humans fighting off the undead horde.

“There’s been a few missions we’ve designed, and just every human died in the first mission,” said Dizon. “I don’t think a lot of people realize how much fun it is being a zombie. I really like building missions the humans don’t really win. Let’s be honest, humans aren’t gonna survive the zombie apocalypse. I don’t think the humans are really designed to win this game.”

“Return to Night” began simple enough: A hand full of zombies facing down an army of Nerf-equipped humans. The game was divided into 5 rounds, each round having a few objectives for the humans to complete. The completion of the objective leads to human benefits, such as access to better weapons and longer zombie stun time. On the other hand, failure upgrade the zombie horde’s attributes, like stronger undead or a severe weakening of the Human fort and safe-zone.

The humans were successful in most of the rounds of “Return of the Night”, although there were many casualties that swelled the ranks of the undead. Round three saw the fall of the human base and the demoralization of the living, but they followed that up with a successful ending to round four. After that, the only way to win was to survive the increasingly difficult waves of zombies. After cutting and shooting their way through the first four waves, it looked like the six remaining humans might have some semblance of a chance, but they were low on ammo and hope. The final wave swooped in and overwhelmed the momentary survivors, ensuring another zombie win for the record books.

“It’s not that the humans can’t win. On a few occasions, the humans have managed to survive,” said Herrera, “but usually the zombies continue to chip away until humans are dead. We like to make every game different and unique.”

The sense of community the game has brought delights Dizon and Herrera. After every game, the moderators like to hold an open forum, engaging the players about what worked and what didn’t. “We try different missions and objectives, sometimes they’re good and we get some positive feedback, and sometimes they don’t work as well,” Herrera said. They’ve even set up a Facebook group for the games in which a lot of the players like to actively share zombie-related jokes and websites.

Dizon and Herrera are graduating soon and think it will be unlikely that they will continue to run the games after they leave college.

“We would just like to say that we’ve had a great time planning and playing these games and meeting so many cool people. We appreciate the support and enthusiasm everyone brings to the game. We would love it if anyone else wanted to take the reins and run their own version of HvZ.”