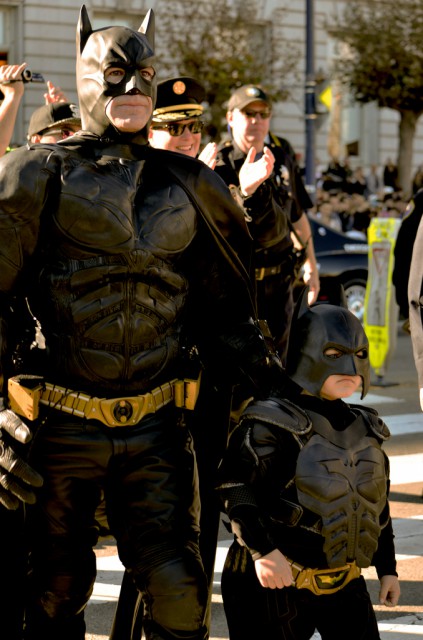 Bat Boy, Miles Scott a 5-year-old boy battling Leukemia came to save the city when the little hero becomes Batman for a day through Make A Wish Foundation, Miles wished to become Batman and his wish came true Friday, November 15, 2013 in San Francisco his last stop here at Civic Center in San Francisco, Calif. Photo by Amanda Peterson / Xpress

“Because he’s the hero that Gotham deserves, but not the one it needs right now… and so we’ll hunt him… because he can take it… because he’s not a hero… he’s a silent guardian, a watchful protector… a Dark Knight…” — Commissioner Jim Gordon

San Francisco is not Gotham, especially not on a day like Friday. Gotham City, home of World’s Greatest Detective, Batman, is a dark and dreary place. It’s full of corrupt cops, super criminals and a seemingly endless blanket of midnight that envelops the entire town. It’s a city where an 8-year-old watched as his parents were gunned down right in front of him. It’s a city whose only prison appears to also be its only insane asylum. It’s a city where its heroes have to be more terrifying than its villains.

Ironically, the day where the City by the Bay tries to emulate the City of the Bat is when it is most apparent the two are nothing alike.

“Five year old Miles from Tulelake in Siskiyou County loves superheroes, and is rarely seen not wearing a costume of one of his idols,” says the official Make-A-Wish press release. “Chief among his heroes is Batman. After fighting his own battle with leukemia since he was a year old, Miles has emerged triumphant and is now in remission.”For Miles, Make-A-Wish crafted parts of San Francisco into Gotham City.

The day began at Union Square as Batkid rushed to rescue a damsel in distress tied to cable car tracks. Following the clues, the black Lamborghini meant to serve as the Batmobile raced to stop the Riddler’s bank robbery. Hundreds of people crowded the sidewalks and streets trying to catch a glimpse of the World’s Greatest Li’l Detective. The Riddler was no match and swiftly acquainted with the back of a police paddy wagon. Lunch time. Batkid stopped at the Burger Bar. Reportedly, there were more than 7,000 attempted reservations to eat with the Batkid. But crime waits for no man, and certainly no kid. A flash mob alerted the Kid Caped Crusader to the Penguin kidnapping Giant’s mascot Lou Seal.A chase through AT&T park ended with the Penguin in cuffs and a Seal unbroken. With the City safe once again, it was time for the Batkid to accept his key to the city from the Mayor. At City Hall, thousands showed up bearing signs of love and support and admiration. A city of people chanted “Batkid” as he made his way to the stage. The excitement was palpable.

Make-A-Wish organized the event. It was the people of San Francisco that brought it to life. Patricia Wilson – the executive director of Make-A-Wish Greater Bay Area – said that in 15 years with her organization she’d never seen anything like it, and she grants some 350 wishes per year. She took to the stage and explained the initial idea to have Miles be Batkid for a day. However, things took a turn for the uncontrollable when someone on Facebook got a hold of the day’s itinerary. It was reposted and reposted and reposted. Batkid went viral. She explained this to the crowd of thousands while news helicopters floated in the air. But this isn’t the first time they made a kid a superhero too.

In 2010, the Seattle regional Make-A-Wish granted 13-year-old Erik Martin’s wish to be a superhero. For the day, Erik was Electron Boy, a hero of his own invention. He was driven around Seattle in a Delorean, fighting criminals named Dr. Dark and Blackout Boy, played by Edgar Hansen, and Jake Anderson, both of Discovery Channel’s “Deadliest Catch.” He freed the captured Seattle Sounders and climatically fought his nemeses beneath the Space Needle. Hundreds lent a hand to help make the day the best of Erik’s life. It was an amazing expression of caring for all involved.

But Batkid blew up so much more than that, and it’s easy to see why: An adorable 5-year-old who just conquered leukemia. The city that built social media, as

we know it, with a healthy dose of “let your freak flag fly” ingrained into our San Franciscan psyche was possibility the best city to host this wish. Batman. The story has everything. Even now, days after the event, #Batkid is still on fire, getting more than a tweet a minute. Wilson expressed that she hoped for 200 participants to sign up for the flash mob at Union Square, 12,000 rsvp’d. Batkid is easily the most publicized Make-A-Wish granted, so much so that even Barack Obama threw in his support through a Vine video. The Batkid Photo Project Facebook page has more than 21,000 likes and an endless scroll of supportive words, videos and pictures. Social media was so overwhelming that even the old media partook; the San Francisco Chronicle became the Gotham City Chronicle with a front page devoted to the Batkid. The world celebrated Miles like no other.

San Francisco is not a city with cowardly criminals and crazy chaotic killer clowns on every corner. San Francisco is a city that came together rallied around a child to cheer him on and make his wish come true. Thousands of people came out in support at City Hall, donning Batman costumes and Batkid banners. They bought Batkid shirts and threw up signs emblazoned with words of hope and praise, of love and support. It was unforgettable.

Batkid reminded the world that there are real heroes.