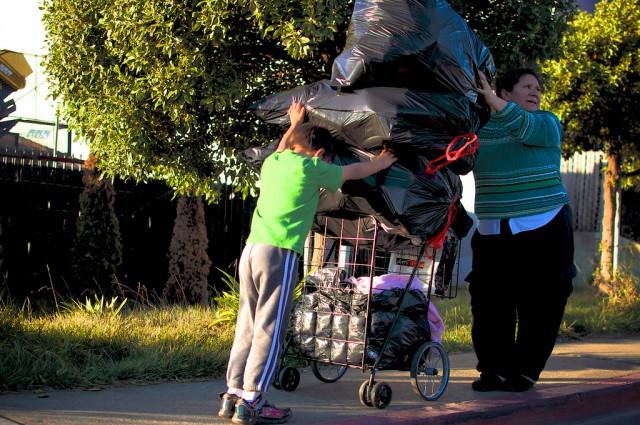 His hands are raw. The stale smell of old yeast from empty beer bottles marries with the San Francisco fog as a symphony of cascading glass interrupts the quiet night. Elmer Rodriguez takes a deep breath and dives shoulder deep into the recycling bin that would pay for his next meal.

Rodriguez is 45 years old. He’s been living in San Francisco after immigrating here from Mexico ten years ago. When he lost his job cooking in a restaurant, he decided to take up a new full time job: collecting.

For about a year, he has been staking out Valencia Street with his shopping cart to collect the merchants’ recyclables. “It is a lot better than going into a residential area,” Rodriguez says. “The cans go out more times a week instead of once a week and the owners, they don’t care, so I just take it.”

At five cents a bottle, recycling has become a new form of employment for people who have fallen victim to our collapsing economy.

The amount of money he makes fluctuates. “It depends on how long I wait—sometimes I’ll just get one or two bins full and call it a night,” he says. But the money is always guaranteed.

According to the Aluminum Association Inc., in 2012, eighty billion aluminum cans were produced in the United States. If every one of those cans were recycled, forty million dollars will potentially be up for grabs. Yet, only a select amount of the population is capitalizing on this.

Noel Cruz, who works at the recycling center outside of the Safeway in the Mission, says usually people will bring in two to three garbage bags at a time to a recycling center and receive anywhere from $10-40.

Most of these facilities close at 5:00 p.m., and according to Rodriguez, many homeless people are left with carts full of cans and empty stomachs because the prime time for collecting is at night after residents and merchants put their cans on the curb. But for someone who has no car or residence to store their own belongings, hauling bags and bags of recyclables is not always convenient when you’re preparing for a night on the street.

It is this that leads to the recycling middlemen. They are the people who drive around in trucks offering fast money to desperate can collectors for a fraction of the redemption pay out. Rodriguez says that many will take the money even though they are making less. “It’s so they can have money for the night,” he says.

While many San Franciscans are use to the image of people rummaging through their bins the day before collection, this practice is actually illegal. Technically, everything that is inside of the bins is the property of SF Recology once it is put outside.

However, residents don’t seem to mind. Maurice Valencia of the Excelsior district says that the same Chinese couple comes by and collects his aluminum every week. “They also bring my cans out to the curb for me,” he says.

In California the garbage companies are even going as far as changing the laws in order to reduce the amount of money individuals can receive from recycling. The new law makes it so recycling centers will no longer give refunds for milk jugs, wine bottles and food containers. It also limits the amount that one individual can receive from a single pay out.

Sociologist Teresa Gowan who spent time living among homeless people in the bay area said in a press conference for her book “Hobos, Hustlers, and Backsliders: Homeless in San Francisco”, that we should allow can collectors to receive payment for their work.

“You have all this stuff being thrown out all the time, and it seems like a way for folks on the street to make a bit of money without actually taking anything from other people” she says.

“They feel they have some kind of honor from doing this, and when I see someone with a big ole load of recycling, I feel happy for them that they have worked hard and can make money and do something that is pro-social as homeless people.”

Recycling has hit an all time high in the United States according to a study done by the Wall Street Journal $67 million out of the $97 million cans that were produced in 2012 were recycled.

But with this buy back policy- who is really making the money here? According to the Aluminum Association Inc., it costs about 95 percent less to recycle aluminum than it is to remake it. While the buyback method was started to encourage people to recycle their garbage correctly, beverage companies are the ones cashing in on fast labor. These can collectors have become a freelance workforce that are not receiving benefits, yet they are doing all to benefit the companies, who buy back the scrap metal as well as reducing the amount of waste in landfills.

The unfortunate truth is that our city is not putting money into programs such as affordable housing and doing all but tearing apart the social safety nets that used to exist to aid the impoverished and the homeless. Much like the amount of recycled goods- the number of these types of individuals collecting them is only going up. The recession has turned most of Middle America into a more frugal society. It is not uncommon for a family with two working parents to also capitalize on the amount of money their kid’s soda cans can bring in. Money is money, and in San Francisco the streets are paved with nickels.