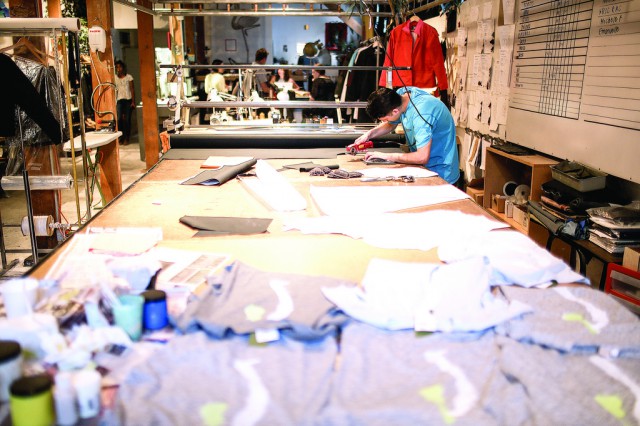 This thriving showroom, equipped with sewing machines, worktables, and a trendy atmosphere, lives up to their slogan of “wear something rare,” because that is exactly what it offers.

Garments are made directly in the showroom and once completed are put out on the floor for purchase. Clients can even stop in and see their

One of the designers working on her garment at the co-op, 440 Brannan Studio. Photo by John Ornelas / Xpress

garment-to-be right on the cutting table during the creating process.  The showroom sets the stage for up-and-coming Bay Area designers to really show their gusto for fashion design.

Since 1996 owner Rodger Alan has kept 440 Brannan up and running.  His studio was not always a place where designers could produce their garments, but Alan says he “decided to share.”  He brought about the idea of allowing people to rent space and produce what they wanted.

Aside from Alan opening up his space to designers he also has opened it up to students. “You don’t just sweep up the floor when you work here, I actually teach you, and you learn shit,” Alan says. Many of the students working at the studio get hands on experience, and can create their own pieces as well.

Megan Jee, an SF State merchandising student, manages the studio and interns. She oversees the selection process of prospective designers and helps host the studios weekly fashion happy hour on Fridays from four forty to eight o’clock. Since not everyone is a designer and has the opportunity to create something, customers can go into the studio and browse the unique collections while sipping on free wine or beer. “What I really like about this studio is that you are free to create whatever you want,” Jee says.

Former SF State student Marco Ruiz is a current designer and says he really enjoys working at the studio, and appreciates the equipment Allan makes available. Ruiz also says that working at 440 Brannan has provided him with more experience and the opportunity to expand his brand in the future.

Alan says this is a place where, “you make things to sell.” His studio usually incorporates five to eight designers. However, there is a process individuals need to go through before they can rent a space.

One thing that Alan focuses on is whether or not prospective designers produce garments that will portray a similar street style that his studio embodies. The clean-cut urbanite that could take their looks from evening to night is the perfect candidate.  “Someone who makes wedding dresses would not work well in the studio,” Alan says.

Consistently featured menswear designers include Alan’s line Hieros, which is made of limited edition pieces and streetwise menswear. Alan’s esthetic is simple, he says, “If I want to make a cropped jacket, I make it.” Alan designs whatever he feels like creating, and he makes it in his size first. If one of his designs is in high demand he’ll make more.  If not, Alan keeps it for himself.

Women’s wear is also featured alongside the menswear designs.  Gordano is a modern unique clothing line created by Jill Giordano and Brian Scheyer that is inspired by architecture. Their designs include tops, dresses, and bottoms that can easily be converted from day to night.

Quality is important to Alan.  Thats what 440 Brannan is all about, a quality garment, made by quality designers in a space where maximum creativity is encouraged.