Listening to water deluge remixes and the ocean breeze shoulder to shoulder with strangers on any given day of the week is not for everyone. Similarly, downloading new age music on an iPod—complete with wind chimes and the obligatory flute may only appeal to a small portion of the population. But closing your eyes with your back straight and palms on your knees, inhaling deeply and then releasing for an hour on at least one day of the week will not hurt any person and might even make life substantially better.

“I remembering taking a Hatha Yoga class that was life changing,” says Sophie Johnson, 24, an SF State alum who graduated with a degree in both Liberal Studies and Fine Arts. Her response may seem unlikely to those who have walked down the secret staircase in Burk Hall leading down to the basement floor. To the left, a huge room, which is quite unglamorous, is as dark as a cave in the Stone Age. In this room that tastes like stale air, there are no bright, white lights or colorful pink and purple yoga mats that boast eco-friendliness.

Holistic health is often defined as a medical practice that focuses on all aspects of a person’s health, including physical, mental and emotional wellness. Holistic health practitioners say they not only focus on a person’s body, but also on his or her soul, or his or her whole being.

Acupuncture, meditation, massage and yoga have been practiced in other countries for centuries and more recently in the United States as an alternative to mainstream health care. ”Although holistic health practices are not new, the cost for these services is high and has traditionally been available to those who have the money, time, or insurance to cover the costs, according to a New York Times article, “Acupuncture Is Popular, but You’ll Need to Pay.”

“A growing number of people are turning to acupuncture for help with conditions including infertility, chronic pain, depression and menopause symptoms. And they are turning to it even though financially it remains a largely out-of-pocket form of health care,” the article says.

According to Larry Caughlan, an SF State yoga instructor, “Traditions have unfortunately become commercialized and the materialism of yoga is discouraging. People are paying a lot of money for it and you can only do yoga if you have free time and money,” he says. 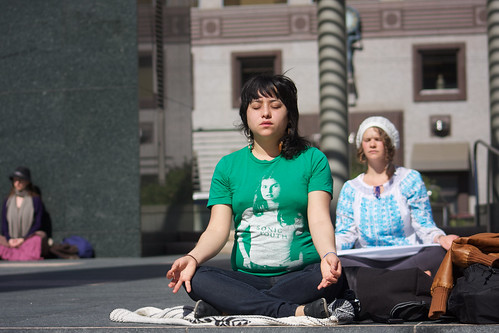 However, free massage and meditation at the Holistic Health Center at SF State and low-cost community acupuncture centers which do not require insurance have sprouted up in the Mission District and all over the Bay Area. Holistic health is seemingly becoming more available to those who have not traditionally had access.

Yasmin Garcia’s calm smile and the brightness of her pink nail polish are fixating as she begins talking about the Holistic Health Center at SF State, part of an academic program of the Institute of Holistic Health Studies. Garcia, 22, is a senior intern at the center, which is located in room 329 in Hensill Hall, where she and twenty other students intern and volunteer Monday to Friday.

“We favor alternative and natural healing, but we don’t discredit the benefits of Western medicine,” she says. “We can use both.”
She also disagrees that access to massage, meditation and yoga is limited to those with money and time. Garcia suggests places like Yoga to the People on 16th and Capp streets. Free schools, such as the Meditation Flash Mob group, a new club in San Francisco whose intentions are “to create an environment for people from all walks of life to come together in meditation, to expose people to meditation through public display, to come together as a community to send positive intentions out into the world, and to show that leading by example is the best way to lead,” according to their Facebook group page.

“There are great deals for yoga on Groupons,” Garcia adds. 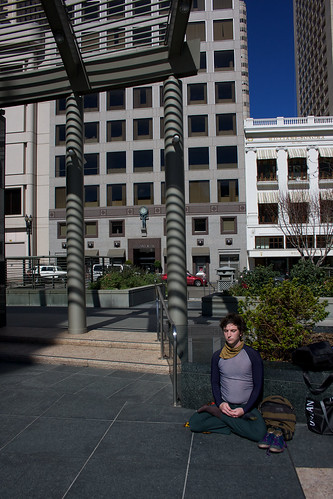 The Holistic Health Center provides free massage on Wednesdays from 10:30 a.m. to 12:30 p.m., in HSS 306. They also used to provide other services like cognitive therapy, which is a therapy that helps a person retrain their thoughts and personal dialogue to be more positive. They have also provided anger management, relaxation and stress alleviating services.

“Some classes and services have not been offered due to budget cuts,” Garcia says. “A lot of our faculty was let go, which sucks. We want to get the word out and outreach more about the Holistic Health center, but we also want to steer clear of cutbacks.”

According to Larry Caughlan, 65, yoga was historically accessible only to wealthy and educated men who belonged to high social classes because the caste system was imposed in India, yoga’s birthplace. These men kept yoga an exclusive practice for a very long time and “it was prohibited partially because only the higher class could read,” says the SF State yoga instructor who sits straight as a board in a squeaky chair in the only lit room in the Burk Hall basement.

The Transcendentalists popularized intellectual yoga around 1857 in the United States, but this knowledge was kept within the intellectual community in New England by famous authors and thinkers such as Henry Thoreau, Ralph Waldo Emerson, and Walt Whitman.

Fast forward a hundred years or so and practitioners seem to be holding on to some Transcendental values, but not all of these values. At places like the East Bay Meditation Center just across the Bay Bridge, wellness workshops and “meditation for the masses” are offered for free in Oakland—once known as the murder capital of California.

Yoga was revived in the United States and made popular again in the 1960s, thanks to The Beatles and the first Woodstock Festival, where a yoga holy man from India came to speak about it, according to Caughlan.