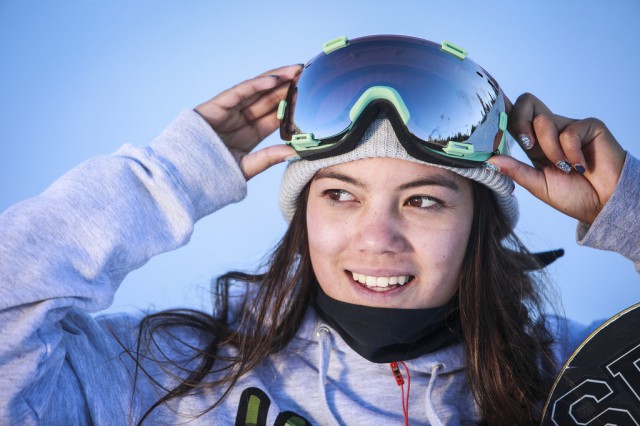 Words and Photos by Mike Hendrickson

Summer Fenton began snowboarding when she was four years old.  By age six she was competing and had picked up her first sponsorship.

When Mammoth Mountain opened November 7th, a month earlier than the slopes in Tahoe, Fenton was among the first groups of boarders who rode the chairlifts to the top.  With winter fast approaching, Fenton is hitting the slopes in anticipation for the Olympic trials in Colorado this month.

Currently, Fenton is ranked in the top-ten nationally for women’s halfpipe competitions.  She hopes to be one of three to represent the United States in the 2014 Winter Olympics this February in Sochi, Russia.

When the nineteen-year-old biology major at SF State found out last July that she was invited to the pre-qualifying competitions in Colorado, Fenton said that it provided some extra motivation.

“I needed to get on my snowboard so bad, I’ve been really hungry to go. I hadn’t snowboarded since July in Oregon. I wish I was snowboarding right now actually. It was nice to be back in my environment and I felt at bliss.”

Summer spends California’s many powderless months in workout sessions with her personal trainer. Every other day she spends two-to-three hour sessions running up sand dunes, spending time on a balance, beam or just general core strengthening.

Two years ago, Fenton suffered a head injury that cost her the season. Despite the setback, she looked ahead seeing the positives that came from the situation.

“Last year I basically had to start from the bottom and work my way up to the top, so last year was a big comeback year for me.  It ended up working out well because I did end up qualifying for the Olympic trials.”

She won the Burton US Open qualifiers which lead to being invited to one of the biggest snowboarding competitions in the nation.

“I think it’s anybody’s game and whoever stomps a run will be the winner.”

Winter is coming, and Fenton plans on being that winner.