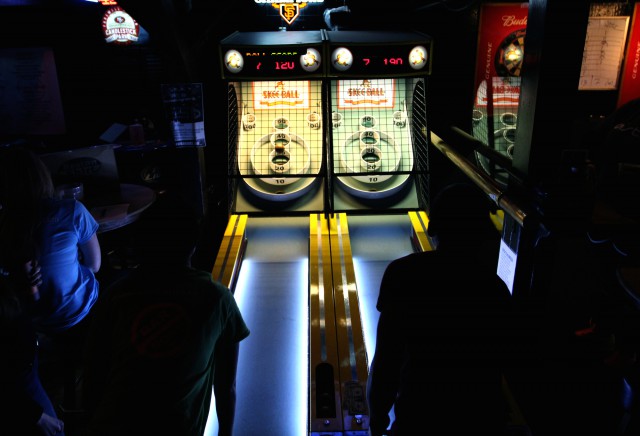 Myra Navarro (left), of Fighting Falangees Balls of Fury, and Chris Chang, of ASTRO Ballers, play each other during a skeeball match at Bar None, in San Francisco, Monday, Feb. 20th, 2014. Photo by Gavin McIntyre / Xpress

As you walk down the streets in the Marina district, every corner you turn is bursting with restaurants showcasing the finest meals and small boutique shops that carry the cutest clothes. The Marina is the perfect place where twenty and thirty-somethings can unwind from their busy lives to enjoy a cocktail at a sleek lounge. But what people may not realize is that the Marina district is also home to the San Fran Skeeball League.

The San Fran Skeeball League take place at Bar None, located on Union Street. The inside of the bar is like a frat boy’s fantasy home. There is foosball, pool, boxing games, beer pong tables, television and of course, a skeeball machine.

On February 6, 2014, “San Fran Skeeball League” held the first game of the skeeball season. The league coordinated by Ty Hyland and Sean Pratt, has become one the newest attractions in the Marina district where people can drink cheap beers, engage in casual conversation, and play skeeball all at once.

“Its super fun” says Amanda Hoffman of The Big LaBallSkees, “It’s competitive, but we’re here to have a good time.”

The mastermind behind the Skeeball League, Giovanni Marcantoni, wanted to create something competitive and fun for people to enjoy.

“It was too cold outside,” says Marcantoni about playing bocce. People were also getting hurt and injured during the game. The bocce league’s problems inspired Marcantoni to create a league that is indoors in a bar where people can drink and play games without traveling anywhere else. Marcantoni branched the skeeball league into different cities on the East coast. He has expanded the league to Manhattan, Philadelphia, Brooklyn, and Charleston.

After a successful run on the East coast, Marcantoni decided to move the league West. Marcantoni added cities Denver, Seattle, and San Francisco—the newest city in the league.

Pratt explored the city to find the perfect bar to hold the skeeball games. The problem in their search was no bar already housed a skeeball machine. That was until they came across the Marina and found Bar None. It was perfect bar, already carrying gaming machines and already with the perfect laid-back atmosphere.

“They help us out by allowing us to have the Skeeball League,” says Pratt, “We help them bring more people to the bar.”

As they finally settled on a location, it was time to spread the news about the new league in the city. They created their website sanfranskee.com where people can register and create a team.

“Anyone can join and play,” Pratt said. “You don’t have to be perfect.”

So how do you join the San Fran Skeeball League? Anyone can register on the website. Each team has to have a captain and a group between six-to-twelve members with each person paying a fifty dollar entrance fee.

“We don’t turn people away,” says Meg Nash, another member. “We want people to come here and make lasting friendships.”

Of course, whoever signs up to play in the league has to come up with a name for their team. People put “Skee” in their teams names. Like the guys from A. SKEE Slater who of course name their team from the popular “Saved By The Bell” television series. Other teams give themselves more progressive names like R.W.A which stands for Rollers with Attitude. Each member has names like Skeeyonce Rolls, MsSkeeElliot, Run DMSkee, Big Skeeballs and Andre Skeethousand.

“We wanted to have names to intimidate other teams,” says  Skeeyonce Rolls about her teams choosing their alter-ego identities.

Not only does Hyland and Pratt host the tournament but they join in the game. When David Miller was the only member from his team that showed up, Hyland and few others jumped in and played with him.

The Skeeball League is far beyond different than other tournaments. The league is created for people to come together and have the time of their lives.

“Most of these folks just come here and have a good time.” says Hyland.