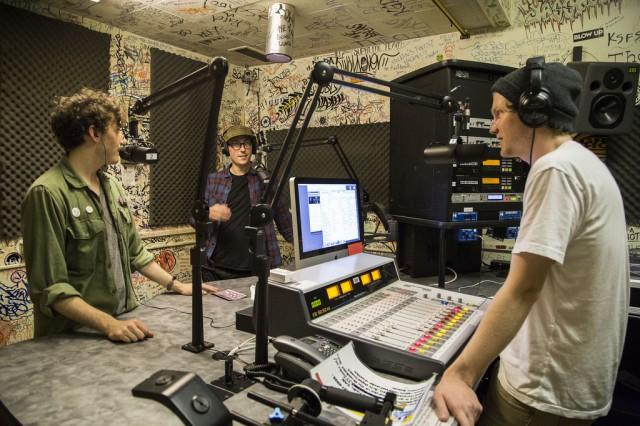 Written by Chantel Genest
Photos and video by Tony Santos

It is seven thirty at night and as students make their way home and the campus slowly calms, the Creative Arts building is in the midst of an artistic collaboration that will bring the college grounds back to life. Local musicians are arriving in the radio
lounge, a crew of audio and video producers are setting up a makeshift stage, and in just
a couple of hours the hosts of Native SF will bring an all-out musical roar to KSFS
listeners.

SF State students Ryan McGeary, Phil Di Leo, and Garrett Peters co-host a program on the university’s KSFS radio station every Tuesday from nine to eleven. The trio brings an innovative show with live performance to listeners each week. With the
help of a crew and the skills these student producers have, fans get not only live radio
entertainment from the station but also video content on YouTube to revel in the local
music whenever they want.

“Though this building is old the resources for students here are incredible,” says
Gina Baleria, SF State online media and radio lecturer. “The full-fledge TV shows and
radio station are amazing. The perfect storm of opportunity is right here.”

The Creative Arts building houses one of Northern California’s biggest
production facilities for radio, television, and multimedia. With three color television
studios, a music-recording studio, radio station, video and audio post-production labs,
and an online lab, everything needed for students to practice and perfect their art form is readily available.

With so much going on in just one building, it seems crazy that many people on
campus do not know about BECA. Inspired and motivated students populate all of
department’s emphases and one of the biggest downfalls is a student coming to SF State
and not being aware that this program exists and missing out on a number of invaluable
classes.

“At the end of each semester I get students in my office lamenting about
graduating,” says Jeff Jacoby, the department’s radio director and advisor. “Not because
they are not happy to be graduating, but because they were not able to take all of the
BECA classes that they wanted to.”

Jacoby came to SF State and took over the KSFS radio station in 2006. While he
entered into a very well known department that was operating on all cylinders and had a
community of generally very happy students, he had some major goals he wanted to fulfill.

“I wanted to change the culture of KSFS so that the radio station became student
property,” says Jacoby. “It became their radio station—not mine, not the department’s,
and not SF State’s. That is how you get students to connect and engage with their
education, by giving them control.”

Each semester Jacoby starts his advanced KSFS radio class by informing his students that he has three sound studios and that everything they do in those studios will
be broadcasted over the web and played for an audience. He asks them one question: I
am going to hand you the keys to this facility, what are you going to do with it?

“I want them to push the envelope of what radio is and what radio can be,” says
Jacoby. “Radio is changing so dramatically and its definition needs rewriting.”

Ryan McGeary is one radio student who took Jacoby’s words to heart. As the
original creator of Native SF, McGeary wanted to expand his show and make it
something new and exciting and challenging. He was ready and willing to invest himself
and all of his time into making it something great.

“It started off as a playlist program because that was the obvious choice,
everyone was doing that,” says McGeary. “But I have been playing in the Bay Area
music scene for eight years or so and it made sense to use those connections to make my
show more interesting.”

Into his first semester producing Native SF, McGeary decided to bring in bands
during his program to play live in the studio. As fate would have it, the first band he
booked included Phil Di Leo. After that performance, Di Leo jumped on the chance to be
a part of the program and has played a major role in it ever since.

“I liked what he was doing and wanted to help out any way that I could and that
turned into what we have today,” says Di Leo.

With two sets of connections and two ideas of what great music is, the program
has been able to see a range of different bands and genres. Along with seeking out bands
to book, McGeary has been reached out to many times when musicians hear about their
show and want to be on. There is no limitation on the talent that comes in as long as the
team believes they are local and have quality music they are more than excited to have
them.

“No one is big or small, it is all about the music and exposing new music to
people,” says McGeary. “Although, we do like to think really, really big and not limit
ourselves to any level of fame either.”

The third member of the group, Garrett Peters, is the production manager of the
entire KSFS station and co-hosts an additional radio show called Blare It! on Saturdays
from noon to two with Danny Molina. He and Di Leo are also in a band called Edward’s
Crossing together. After initially assisting McGeary as part of his managerial roles,
Peters liked the direction the show seemed to be heading and decided he wanted a take
on a permanent role with Native SF. McGeary and Di Leo were more than welcoming.

“We are a good team, we all can visualize similar images in each other’s head and
understand what we are talking about,” says Di Leo. “We are all open to new things and
are all very receptive to each others ideas.”

The team shows up hours early each Tuesday evening to set up for the broadcast.
Microphones and cords are placed all around the room, having to be checked and double-
checked and triple-checked. Cameras are set up; lighting is arranged around the lounge.

When the band shows up they brief them, do a sound check, audio and video record a
five to six song set while live on the radio, and have to clean all the work up in thirty to forty five minutes to be out of the Creative Arts building by eleven. After that, all of the separate elements from production are assembled; at least three songs for each of the live bands are edited and put up on YouTube.

“In our experience the live radio is not the most lucrative part of it,” says
McGeary. “We try to put content out in multiple platforms and have multimedia out
there, not just audio.”

The co-hosts have melded into a driven, creative, and collaborative unit and it
shows both on air and off. In between hours of setting up a play space, grueling over
perfect sound and audio checks and the never-ending editing of mass content, these
friends give off a constant circle of comradery and good-natured shit talking.

As all three members share similar backgrounds being musicians themselves, they
have an understanding of what bands want and expect and need to perform well. When
the bands come in, keeping a good vibe and staying professional with what they are
doing makes the program go smoothly.

“Native SF is a three-man production team that strives to bring unheard and enjoyable music to people in a presentable way that is both beneficial to be viewed in the
audience perspective and the bands perspective,” says Di Leo. “We are a middle-man for
bands that are trying to speak to their fans.”

As much as these guys do to run the show, they definitely give credit to the other
students who come out and help each week. There are so many things that need to be
done and just three people couldn’t possibly do it without recruiting help from outside
majors like photojournalism and cinema. A core group of about six other SF State
students show up with cameras and lights and whatever is needed.

“It has been rewarding to see those people come out of the woodworks become
the people that we rely on every week,” says McGeary.

When it comes down to it, Native SF is doing exactly what it is meant to. As their
advisor Jacoby discusses, you have to push the boundaries, give a definition to radio, and own your product while doing it.

“Phil and Garrett and Ryan, what they are doing, what Native SF is doing on
radio, is classic BECA student behavior,” says Jacoby. “That is exactly what I want
students to be doing.”

KSFS has over sixty scheduled programs playing one-hour to two-hour sessions
throughout the week between eight in the morning and eleven at night on ksfsmedia.net,
which is also run by BECA students. No shows are exactly the same, and the free form
radio structure of the station allows for a range of topics from Travis Schilling’s
Countdown to Coachella to Rocky Matthews & Brionne Bauchman’s The Rocky Hour
Show, a sex education and relationship advice talk show.

“You can have a show about books, about all hip-hop, a talk show, a sport show,
whatever you want,” says BECA senior and KSFS General Manager Michael Payton.

“Basically every hour you are on the station you are doing something you want to be
doing.”

Even with all of the freedom that BECA radio students receive in their artistic
process, the faculty guiding them is what allows for such a productive and creative space.

Jacoby does impose FCC regulations on them because it is exactly what will have
to be used after they graduate and “that is good training.” He also imposes the idea that
they have an audience and that they should serve their audience.

“I think this experience will prepare me for the radio world after I graduate
because the teachers really focus the coursework on things that will help us in the real
world,” says Sara Bailey, co-host of Dopest of the Decades on KSFS.

Some may think that radio is a dying medium, but the students and faculty in the
BECA department and on KSFS know that that is not the case. Even as terrestrial radio
declines in the shadow of Internet radio, the station here is already set up on the web and the moment online radio is available in the car, KSFS will already be there.

In truth, what radio is cannot really be said. With the use of multimedia, podcasts
and YouTube, and the enormous available outlets on the Internet to get content out, radio
is more than what it used to be. To be in the industry students have no option but to
become multifaceted and that is exactly the aim that the BECA department has for them.

Like the hosts of Native SF, creativity and innovation is spilling out of the
Creative Arts building every day. The BECA department is highly renowned all around
the country and students leave with vast experience and opportunity to succeed. You can
find a BECA student interning or working at almost any radio station in the city and the
professor connections and achievements only put them even more ahead of the crowd.