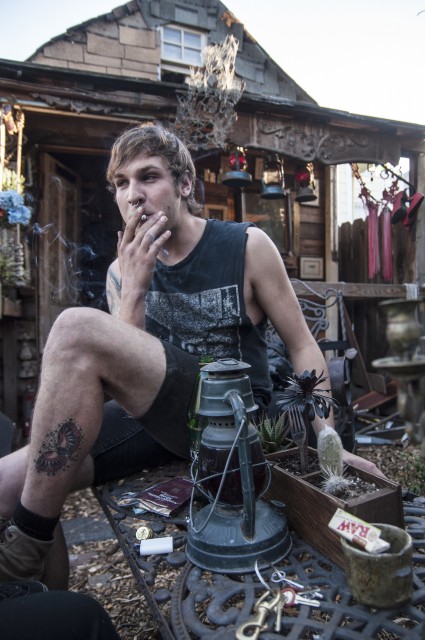 Written and filmed by Andrew Cullen
Photos by Jessica Christian

Stand at the end of Fourteenth Street in West Oakland. This neighborhood has seen the worst of Bay Area gentrification, and its reflection is in the glass that covers the sidewalks, flowing down into gutters, stretching into the distance. It sticks to the walls of buildings and the fronts of homes, where everything as tall as the average person is covered with decades of graffiti frescoes.

A leather recliner, like the one your grandfather used to sit in, is now tipped over on to the asphalt, lacerated from end to end, hemorrhaging foam into the storm drain.

There are no people here. There are signs of their presence, though there are merely only clues as to where they may have gone, yet the only sound is the static of the constant humming vibration of traffic from the overpass overhead.

Track homes are huddled, wall-to-wall, all the way down the street, only broken by a chain link fence surrounding a dirt lot where one of those houses burned to ground so many years ago.

But this lot is not vacant.

Tucked behind the trees lies a treasure. Shrouded in shrubbery sits a shack, only slightly smaller than a garden shed, fitted with a loft, a fire burning stove, a desk and an old grand piano.

Built from the ground up, Matt Christensen gathered as much materials as he could from the local dump, where he worked, and eventually piled up enough to begin building himself a home.

“I moved back here, and pitched a tent, and started collecting materials,” he says. “I worked in the dump at the time, so it was pretty easy to get building materials.”

Construction of the shack is an ongoing project, and now that Jake Wobig, Matt’s husband, moved in, the project is beginning to expand. They hope that soon, they will be able to install solar panels for electricity and piping for running water.

The San Francisco Bay Area is undergoing rapid changes in the wake of what some are calling the second “dot-com” boom. The rise of tech companies and their mass exodus from Silicon Valley to San Francisco is propelling the Northern California economy in ways that are only comparable to New York City at the dawn of the industrial age.

Of course, our golden city is less than fifty square miles, so when we see a great influx of residents, we also see the San Franciscan middle class begin to dwindle. While the lower class, is literally being pressure washed off of the sidewalks, and pushed back into the shadows to paint a picturesque portrait for app developers, and startup entrepreneurs.

For many, surviving in the Bay Area means resulting to drastic measures. Jake and Matt have found a way to dodge the fist of gentrification by building their home from what others saw as trash, in a vacant lot in West Oakland.

Historically, San Francisco has served as Mecca for a collection of people from no where. San Francisco is built to sustain the lonely; packed to the brim with dark alley pubs, SROs and one bedroom apartments.

And yet, for those who fall on the ends of humanity’s bell curve; those who cannot be so tightly fit into society’s little box of “normal,” San Francisco shines as a beacon of hope in the fog, a city wise beyond its years, nurturing the broken and the lost.

San Francisco is of course famous for being one of the most important LGBTQ rights hubs, and because of that, the city’s widespread greeting arms attract many young LGBTQ kids who have been shunned out of their homes in middle America.

Unfortunately, San Francisco isn’t the place it used to be, and many LGBTQ kids who make the pilgrimage here in the hopes of finding a LGBTQ community with open doors wind up with a reality check that knocks them into homelessness, addiction, or sexually transmitted disease.

According to the San Francisco Department of Human Services, as many as twenty-nine percent of San Francisco’s entire homeless population is LGBTQ.

Before meeting Matt and moving into their cozy West Oakland shack, Jake’s life almost became one for the statisticians.

“High School wasn’t the greatest,” Jake says, sitting in the office of the French café he now helps manage. “It made me like, mentally fucking crazy.”

He is not alone, but often living as a gay man in Idaho, it felt that way. He remembered the feeling he had when Idaho lawmakers pushed for a bill that would legally protect police officers, firefighters, doctors, teachers, and nurses from providing any service to gay men and women, based on their religious beliefs. “Shit like that” he says, “it impacted me a lot.”

“I was more than out,” Jake says, reminiscent of his younger years. “I showed no fucking mercy. The hatred people would show towards me would just fuel me.”

His memories of his adolescence are ones that one may hear echoed on the nightly news. He remembered being bullied, “getting called names, getting shoved around” for the clothes he wore.

Jake always chose to bite back. “I would just make it even more extreme,” he says. “In ninth grade it got to the point where I would just wear full on drag makeup. I would do it on the bus. I had this scarf that I would pull out and pull down as a skirt. I would always just piss people off.”

“I was just an obnoxious, in-your-face kid; I hated everything around me,” he says. “It was always just one extreme after another. I’m a lot more mellow now though.”

It was after high school, when he got a solid friend base, that things weren’t as bad, he says. “But Idaho still just drove me insane. I couldn’t stand it there.”

After high school, Jake got a job as a custodian in a hospital kitchen. “It seriously sucked,” he said. “I was living paycheck to paycheck, in a city I grew up in my entire life, for the most part, that I really hated.”

With that thought in his head and three hundred dollars in his pocket, Jake hopped on a Greyhound bus, and headed west. “I decided there was nothing really to lose if I left,” he said. “And I have not gone back.”

After bouncing around with a few friends in Portland, Jake grabbed the last twenty dollars he had to his name and jumped another bus to San Francisco.

He came to San Francisco with no place to stay, no job and no flowers in his hair; yet he fought to make it work. He had one friend in the city who let him stay at her Inner Richmond house, but it was not a free ride.

Shortly after moving in with his new roommate, Jake was finally introduced to someone who would make his stay in San Francisco more permanent.

Matthew Espinosa met Jake at Jake’s Richmond apartment and based on nothing but “faith and trust” offered Jake a job at an unsuspecting establishment: a coffee shop.

According to Jake, Espinosa’s boss even told him “it’s your ass if it doesn’t work out”.

“That was great,” Jake says. “I felt really grateful for that.” Without Espinosa’s generosity, things could be very different for Jake in San Francisco. Unfortunately Espinosa moved to Southern California shortly after, where he committed suicide in February.

A mutual friend from Jake’s time in Portland suggested that he and Matt Christensen meet, since they both lived in the Bay Area.

They did, and after a short time, they moved in together; into Matt’s shack in West Oakland.

Although their humble abode is expanding, there is still no certainty of how long the honeymoon will last. According to Matt, the rightful owners of the lot have a defunct address and a disconnected phone, making their return unlikely, but in the realm of possibility.

“I started looking into the legal parts of it, and how we would eventually be able to claim it,” Matt said. “I looked into how adverse possession works, and its basically just a fancy word for squatters rights.”

The shack is built primarily from wood collected from Matt’s old job at the dump. The only portion of the house that was purchased, was some roof insulation and a ceiling pipe for the chimney they have connected to a small iron fireplace in their living room, which all together cost them about three hundred dollars.

Neither Matt, nor Jake knew anything about architecture or carpentry before building the shack, but rented books from the local library to teach themselves.

In the future, they hope to expand the compound by adding a second shack, and a compost outhouse, which “sounds gross, but is actually great for gardening,” according to Matt.

In their front yard, they have two planter boxes which they have grown edible vegetables in, alongside a synthetic beehive. “It’d be nice to have something other than microwave pizza… not that microwave pizza is bad.” Matt said.

They have dabbled with the idea of installing solar panels to generate electricity, but are weary because they are both away from home most of the day, and fear that they may get stolen.

The house itself is built around Matt’s old grand piano, which he claims was  “actually built into the plan.”

Matt collected as many items from the dump as he found interesting and brought them home. If the boys did not find a use for it, it usually was simply nailed to the wall and used for decoration. The house is littered with family pictures from people they have never met, fragments of the past lives of those who never were.

The “off-the-grid” nature of their cottage may seem extreme, or weird, but it is exactly that weirdness that makes it their home.

Now, stand back at the end of 14th Street. Look past the flowing stream of broken windshields and see through the dull vibration of broken dreams. Imagine the times when one could see children sliding in the park, throwing footballs in the street, and families having barbecues on their driveways. Imagine a time when the homes on the street bore no graffiti on their walls and when a kid could lay on the grass and imagine pictures in the clouds.

Do your best to see this while you can, because soon enough, even the shadows of neighborhoods like this will soon be bought out and replaced with parking spaces, and temp positions and the quintessential Bay Area feeling may be gone.

So, whether you are here to stay, or just passing through, look closely at the faces of the destitute begging for change, listen hard to the bus drivers who carry a bus packed with broken hymns, and as you walk through the streets remember to breathe it in, let it become part of you. Remember each star in the sky, hanging heavy above us all and know that although like the stars, we may seem to drift through the darkness alone, we all still have a home.

One Response to “Home”