Out withe the old and in with the new: Library enters final stages of construction

There is indeed a plan. That massive, blue-tinted, glass curtain that jets out from the seemingly never ending library construction is part of a larger vision. Once completed, the glass wall will lead the eye on an unobstructed visual trip, from 19th Avenue straight down the walk-way, past the future site of a new Fine Arts Building and ending with a view of the Humanities Building. It is one building block in the puzzle that is the Campus Master Plan.

The San Francisco State campus has been without an official, centrally located library since the summer of 2008. The original completion date was set for the fall of 2011, but that date has since been moved back to the spring of 2012.

For many students, the long walk across campus to the Annex building between Lake Merced Drive and Winston Boulevard is just a way of life while attending SF State.

Alyssa Hagood is in her junior year as a business major. Most of her classes are in the business building, which would just be a stone’s throw from the library, if it were completed. But rather, she makes the ten minute walk at least once a week to the Annex where she can meet with other students to study.

“I never saw the old library and I don’t think I will be around to see the new one,” says Hagood. “I don’t mind the walk that much, but it’d be nice if I could just stop in really quick for a quiet place to study or meet with a group without having to go from one extreme end of the campus to the other.” 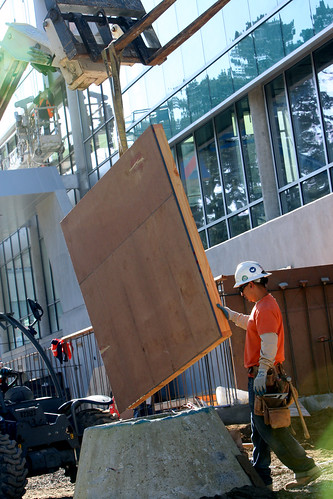 Once you are there, the Annex is a pretty decent place to study or use a computer. But during mid-terms and finals, the large white room which has become known as “Club Annex” to some students due to its 24-hour accessibility gets crowded and space becomes scarce.

Computers fill up, comfy chairs are taken and study tables are packed, but what every student can be sure of is that when the new library opens up, this will no longer be a problem.

It would appear that no one is more excited about the unveiling of the completed library than head university librarian, Deborah Masters.

Masters has been at SF State for sixteen years and for the last ten years she has been hands on in the process of getting the school a new library. Now, with just over a year toward the projected completion (a date that is likely subject to more delay), Masters is finally seeing the state of the art library materialize into its final form.

“I am just so going to enjoy that moment,” says Masters. “Of walking into that building and seeing the students using it. I just want to see them everywhere. For students to have that kind of environment, with the natural light coming in from that glass façade is just so great. They are just going to gravitate to it.”

Aside from enjoying the beautiful aesthetic of the architecture and the flood of natural light, students have a modern and very well equipped mega-library to look forward to.

On the ground floor of the six-story library, students will enter into a state of the art facility which will be known as the study commons. On this floor alone, students will have access to sixty desktop computers as well as forty places to use a laptop computer. Students can bring their own laptop and plug it in or borrow one of the hundred loaner laptops which will be available. Those same laptops are currently available for checkout in HSS 127. 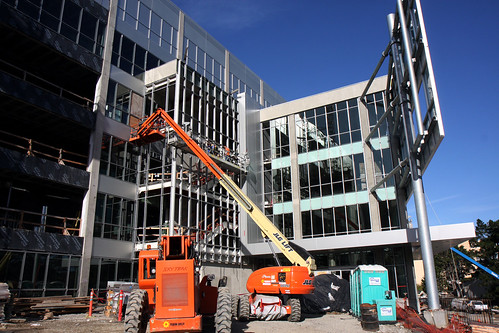 There will be media viewing and listening rooms with a checkout center located next to them. Any CDs or movies you may have seen in class will be available for viewing on your own time in a private room. Twelve study rooms will give students a private place to meet, equipped with white boards, media capabilities and enough seating space to hold six to twelve students depending on the room. This floor and all of its resources will be available to students 24 hours a day and can hold up to about three hundred people.

The next floor up will be an almost identical space, with computers, study rooms and media capabilities, unlike its ground floor companion with a small café serving ready-made foods, pastries, coffee and all the little things that fuel good studying.

As you ascend another level in the building, you come upon the open stacks and book collection. Rows of traditional library books will be available to browse and among the book collections, there will be more study spaces. Desks and chairs will be located along the perimeter and amidst the rows; outlets will provide power for laptops. In addition to the open book collection, this floor will house the multimedia production center where students can use editing software.

A selection of high demand and more recent books will be available in the open stacks for browsing, but around three-quarters of the school’s books will remain in the automatic retrieval system. Many students have become used to this process since the library first went into construction. A student may request a book through the reference desk or online. Those books are located in stacks where a mechanical arm retrieves them and delivers them to librarians or staff.

Currently, there are about a dozen students and other staff members that work to make those delivered books available to students. Despite what could be considered a lack of students using actual books for resources, Masters assures they are very busy with the automated retrieval system. The system saves space and has been working well. The stacks for the automated retrieval system will remain intact, in the west wing of the first and second floors.

The third floor will have even more accesable stacks of books and another large open study area with laptop capabilities, reference desks, maps, charts and other resources for students. The fourth floor will offer special collections, a children’s book section and more study space with outlets and desks. Masters feels that the higher you go in the building, the quieter it will get.

The fifth and sixth floors will be occupied by the Sutro Library. The Sutro Library is a branch of the California State Library. What started out as a significant collection of a couple hundred thousand volumes of rare books originally collected by Adolph Sutro has grown into a significant genealogical collection, according to Masters. Once the geneological collection is located in the campus library it will gain a lot of attention and will be a valuable asset, especially for graduate students who need primary sources for their research.

The construction of the library has been a two part process which in the end will have added 70,042 gross square-feet to the existing library. The first part of the process was the removal of old library resources, demolition of the Franciscan Building and the construction of the new wing. The exterior work is almost complete and the final phase is underway. Crews are moving onto seismically retrofitting the building and moving onto the interior work. Heating, plumbing, electricity, drywall, sprinklers and other finishing work will soon be uninterrupted by weather once the exterior is sealed.

Simon Lam is the Associate Vice President of Capital Planning, Design and Construction (CPDC) and his job is to oversee construction. He feels that the work running behind schedule is an inevitability of such a large construction project. According to Lam, in a project this large there will always be unforeseen complications that arise along the way.

CPDC is in charge of the campus master plan, which will be keeping the campus in a state of construction for the next several years.

According the SFSU Master Plan Website, the purpose of the phyiscial master plan is to create a functional setting that will meet the strategic goals of the University and support the academic mission. by and large, the plan aims to accomodate an increased enrollment from twenty thousand students to twenty -five thousand students by the year 2020. all new development is to occur withion existing campus boundaries.

While crews are in the final stretch, the library is not scheduled to be open for another year. Now it is time to begin selecting furniture and deciding what vendors will operate inside the building.

For a week in April, test furniture was displayed in Annex 1. A variety of chairs were set up near the computers and a feedback box was left to take suggestions and comments from students. Masters’ said they received a lot of feedback from students and will consider that when choosing chairs for lounging, computers and study tables.