Touchscreen Fever: The hottest new phones to use in school 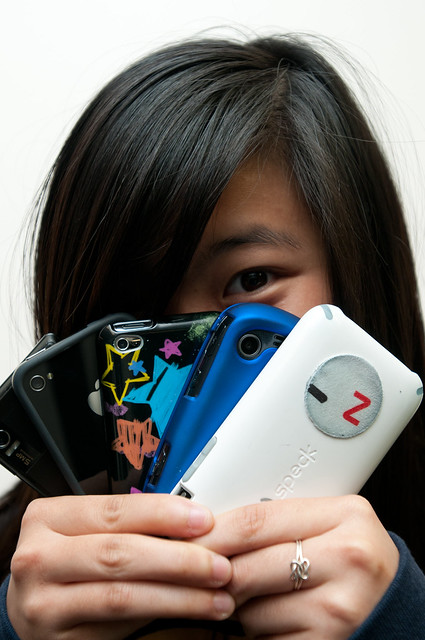 It is 2011 now, and time to ditch that old phone. Heck, these days, if it still has keys, you are effectively in the dark ages. Touch screens are the norm now, don’t think you can look cool texting with a full keyboard. That’s so 2009.

But where to start? Sure, the iPhone 4 may be the most recognizable these days, but it is far from the only slick phone on the market. So browse through our top choices, check with your carrier, and pick the one that’s right for you.

IPhone 4G. (Verizon, AT&T)
The latest and greatest version of the phone that started it all. High definition video, cameras on the front and back, a built in flashlight/flash, and an extremely high resolution screen are a few of the new additions to the already solid iPhone line. While this fourth-generation (4G, get it?) version is more evolution than revolution, there’s a reason that this is widely considered the phone to beat. Early reports of reception problems during calls did little to stop the sales of this phone, but ask friends or neighbors about their experiences first just to be sure.

IPhone 3GS (AT&T)
While nobody likes having a phone that’s not the latest and greatest, the basement-bargain prices for the 3GS make this one-generation outdated phone a solid option on a student’s budget. While it may not have all the bells and whistles of the 4G model, your $50 still gets you Apple’s latest operating system, built-in iPod, camera, and, most importantly to the trendy, it’s an iPhone, albeit a slightly outdated one.

Blackberry Torch 9800 (AT&T)
Blackberry is the company that got the ball rolling when it comes to smartphones, and this new model is squarely aimed at those who want a modern phone while still staying true to the traditional Blackberry. The Torch offers both a slide out keyboard and touchscreen, but while it runs Blackberry’s latest 6.0 operating system, it still doesn’t feel quite as slick as Google’s Android or Apple’s operating systems.

HTC Evo Shift/Inspire (Sprint/AT&T)
A real iPhone 4 rival, the Evo Shift/Inspire (different names for essentially the same phone depending on the network) offers the biggest screen of any phone, allowing for easier web surfing or movie viewing. Of course, the flip side of such a big screen is that the phone itself is a touch larger than others—not a bad thing, but make sure that it feels right in your hands before laying down the money. Another plus for the Shift is that it also offers a slide out, full keyboard for those who haven’t quite gotten the touchscreen thing down yet. The phone uses Google’s Android operating system, which offers the only app store to even come close to rivaling Apple’s. As a bonus, Android’s operating system is open-source, meaning that unlike Apple’s software, anyone can create programs and applications for Android—but check with your carrier first, says longtime cell phone salesman Daniel Heath. Some service providers only allow the use of authorized apps anyway, making open source software irrelevant to most consumers.

Samsung Galaxy S (T-Mobile)
T-Mobile’s iPhone rival is a solid phone, but its features still leave it ever-so-slightly behind the latest crop of top phones. Like pretty much every real rival to the iPhone, the Galaxy uses Google’s Android software. But unlike the iPhone 4, the Galaxy is missing a flash for its camera, although it does have both front- and back-facing lenses to allow for video calls—something T-Mobile has made a big deal about in their national advertising campaign, although admittedly, the carrier is still working out the kinks in the system.

T-Mobile MyTouch (T-Mobile)
The other iPhone-rivaling device in the T-Mobile stable, the MyTouch is now in its second generation, and offers the same features as the Galaxy S listed above—although there have been reports of some glitches with video calling on the MyTouch. A major bonus is the stainless steel parts, which give the phone a heftier feel than some of its rivals. While feel is a very subjective measure, the higher weight of the phone improves the feeling of build quality and durability.

Motorala i1 (Nextel)
Nextel is a little late for the party when it comes to state-of-the-art touch phones, but the i1 is still a solid offering. While the phone does use Android software, it only runs an early version, reportedly not as fast as the latter software. But the big selling point for Nextel is the company’s push-to-talk, Direct Connect network. This allows users to talk with each other at the push of a button, like a walkie-talkie. So for those seeking push-to-talk and a slick touch screen smartphone, this is your only option. Ultimately, though, push-to-talk is probably more relevant to contractors and truckers than it is to most college students.

Motorola Atrix (AT&T)
AT&T works hard to have the latest and greatest phones, and the Atrix is not exception. While it offers most of the usual smartphone features, the Atrix’s big claim to fame is its computer dock. It looks like a laptop, features a full keyboard, and has an 11.5 inch display. The computer dock itself has no memory—everything is stored on the phone, so when you are ready to go, you can just yank the phone off the dock and everything goes with you. While it is not a cheap option, it is a cool feature that is worth looking into, especially if you are not someone who needs a full laptop, but you want something more practical than a normal smartphone to carry around.

So there you have it. See? You don’t necessarily need an iPhone after all to have the satisfaction of whipping out your phone and googling the answer to your professor’s questions, or to settle that debate at the pub. Just make sure to weigh all your options and choose carefully—phones are enormously expensive without a contract renewal, and most carriers only allow you to renew every one or two years. So whatever you may choose, be happy with it. These days, your smartphone is more like an extension of yourself.