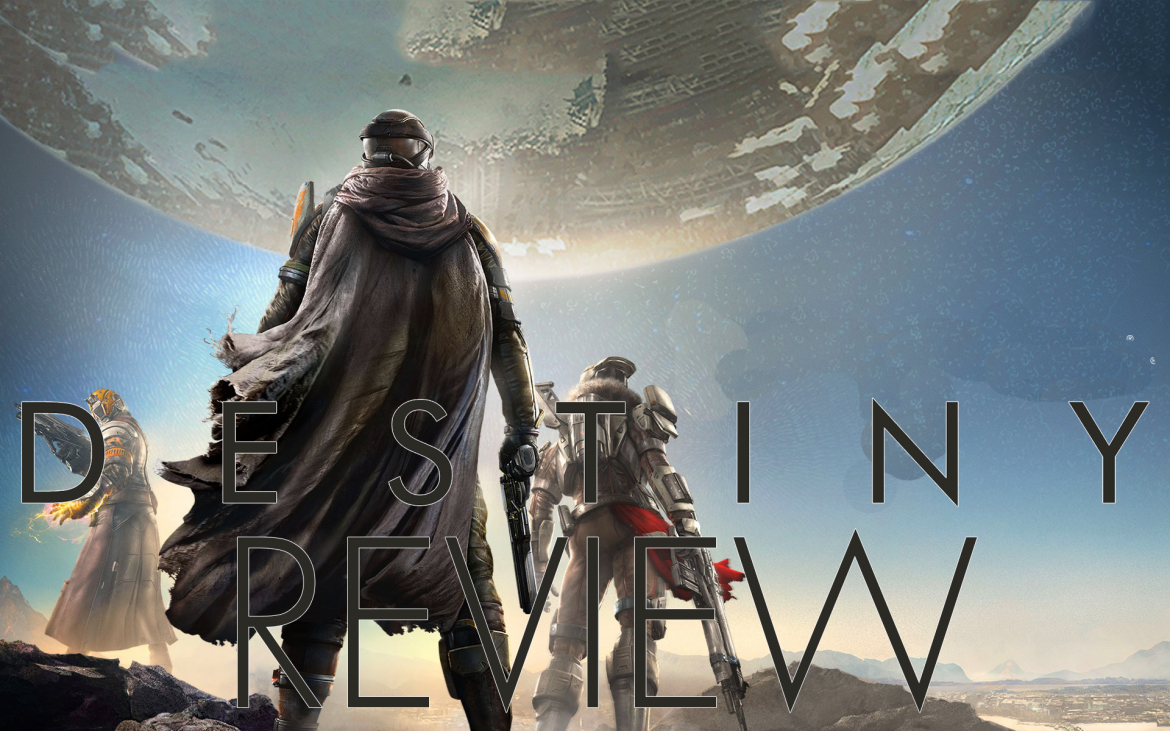 After splitting from Microsoft in 2007 and subsequently the Halo franchise, developer Bungie has executed a vision of the next generation of shooters that feels like it was thought up before the technology could support it. Destiny is the first part of a ten-year vision, merging the MMO (massively multiplayer online) mission structure with a first-person shooter. Hype and developer pedigree has carried this game since its unveiling, but only its pure quality can propel it past its release. Unfortunately, Destiny falls into the trap of many ambitious new franchises by failing to move pasts its good ideas and solid foundation.

The shooting foundation – the very core of Destiny – is something that matches (or hovers close to) Bungie’s prior work with the Halo series. The simple act of pulling the trigger on the cookie cutter weapons and throwing grenades just feels good, which carries the game quite far. Combat scenarios do not feel as curated as the skirmishes in Halo, but killing the hordes of enemies can always fall back on the quality of its basics: aim, shoot, kill.

These three actions are just about the only available actions in Destiny, wherein lies part of the problem. Destiny suffers from repetition; the kind of repetition that you are always painfully aware of. All missions almost solely revolve around shooting. You kill a few things, wait for your robot to open a door, then you shoot a whole room of more things. Then you turn in the quest and the cycle repeats until… well, as long as you can stand it.

But even though shooting always begets more shooting, there is an aspect that makes it easy to keep returning. It is not the light loot system. It is not the non-existent increasing complexity of the combat encounters. It is not the enjoyable upgrade system. It is the ability to play with a team and mow down hordes of neatly-designed aliens.

The seamlessness of the cooperative play and gratifying weapon mechanics make Destiny more than the sum of its parts. Taken at face value, the frequency of the missions that repeatedly send the players into the same environments with eerily similar firefights is borderline unacceptable. However, these issues become less noticeable when more people jump into a Fireteam and blast away. Cooperative play can be a cheap way to smooth over rough patches – just ask players who suffered through Dead Space 3 – but Destiny goes beyond that by nearly requiring multiple people. Without a group, it gets worse, devolving into a poorly-paced, monotonous snoozefest that the game clearly was not designed around.

Despite there technically being a single-player mode, there is almost no campaign to speak of. If Bungie attests to that statement, that would make the attempt at a “campaign” mode even more pathetic. Destiny paints a picture of a science fiction universe with a deep lore, one that could mined for many stories a la Mass Effect or Dead Space. About an hour in, it becomes clear that any sense of narrative is a facade, only loosely constructed to haphazardly lead the player(s) from battlefield to battlefield.

The narrative suffers because there is nothing to grasp onto. No sense of drama. No memorable opposing threat. No real personalities and that is counting Peter Dinklage’s character, one that comes up shorter than Mr. Dinklage would at a slam dunk competition. Destiny, on the surface, appears to offer a thought-out, well-crafted mythology, but it cannot even deliver on the most basic elements of storytelling.

Multiplayer does not need any narrative strings attached; it can be whatever it wants to be within in its own bubble. Destiny suffers from the most basic sin in all of the competitive multiplayer world: a hideously unbalanced set of skills. All of the modes draw from the same character pool, meaning your co-op character is the exact same person you drag into multiplayer. This puts new players at a severe disadvantage at the get-go since they will fall victim to higher-leveled players with better guns and a more advanced set of skills. Getting slaughtered by a team with legendary gear is not fun since repeatedly walking into the meat grinder yields nothing except for justified bouts of frustration.

But even if you all hover around the same level with similar gear, most of Destiny’s competitive multiplayer revolves around one-hit kills. From enemy abilities to the overpowered spread from a shotgun, a large portion of offensive moves can down an enemy or two in a single blast. This kills any sense of strategy and any hint of tension since any sort of intelligent play can be easily doused by a sloppily aimed energy fireball or magnum shell. Destiny caters to players who favor cacophonies of explosions and too-easy-to-use abilities over skillful team play, which make this whole section of game easy to skip.

Destiny is a rough draft of a game franchise that will eventually earn an A. After all, it does have a ten-year plan and the publishing power of Activision-Blizzard behind it. But, like the first Assassin’s Creed, Destiny feels like a brand new idea that forgot to craft a compelling game around its ambition. What we are left with in Destiny is a solid shooting foundation with a bunch of pieces that show promise behind their underdeveloped chunks. It works on fundamental level – that much is true – but we just need a sequel to iron out the many kinks.
Bestiny:
+Tight shooting mechanics
+Leveling system is basic but makes each class stand out
Worstiny
-Repetitive missions with elongated boss fights
-Underdeveloped “story” mode
-Horribly unbalanced competitive multiplayer