All of the Lights 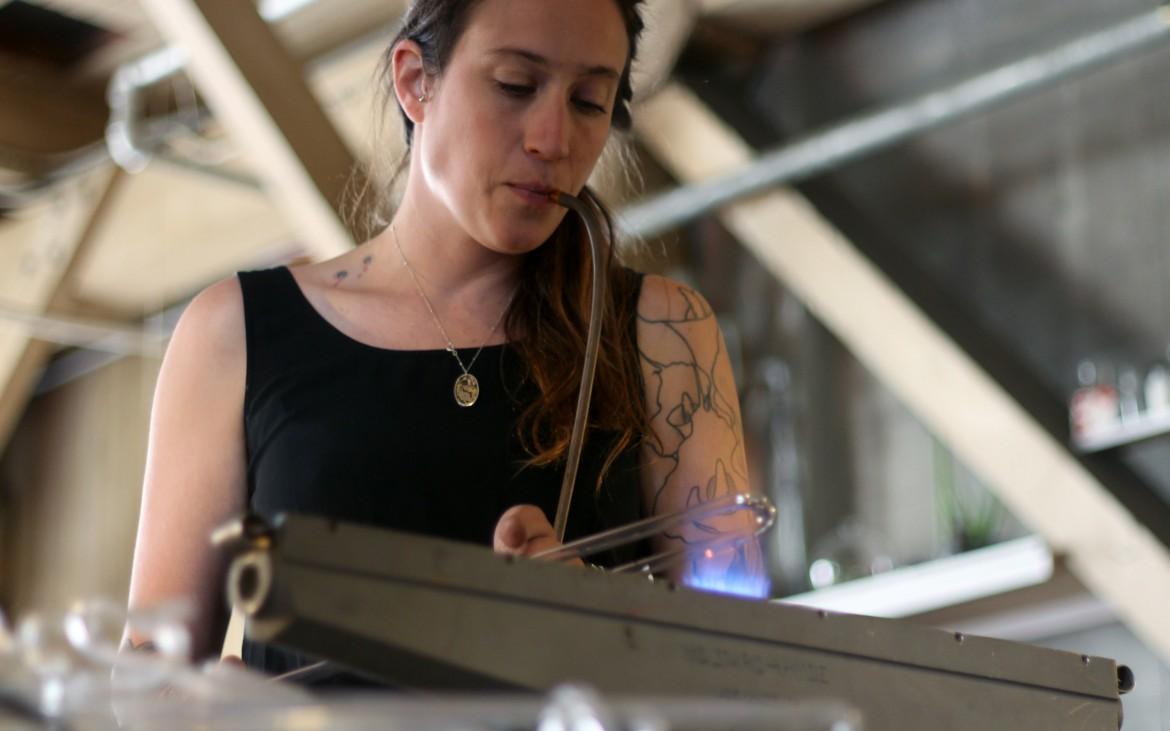 Neon Artist Meryl Pataky works on a glass tube that will be used for an upcoming piece. (Gavin McIntyre / Xpress Magazine)

Of the sixty artists who displayed their work in the “UNIVERSE: The Art of Existence” show at the Modern Eden Gallery in North Beach, only the piece entitled “Building Block No. 2” truly separates itself from the pack of mixed media. In a pocket of space, in the middle of the room, centered on the wall, between three arches, the element symbol for helium (He) glows in neon on a bed of silk white roses.

Past a bicycle resting at the foot of the stairs and up the creaky wooden steps of her studio, Meryl Pataky, the multi-disciplined artist behind the helium piece, is at her workstation contemplating reattaching a broken piece of glass tube in the form of the elemental sign for gold (Au). “Should I start over?” she asks herself out loud. Pataky’s aesthetic is always changing, but remaining constant is her overall vision for the works she produces. In her craft she uses the noble gases: helium (He), neon (Ne), argon (Ar), krypton (Kr), and xenon (Xe) amongst other materials such as iron, steel, carbon, and other organic materials like deer hide.

On her own in 2002, the thirty-one-year-old moved across country to San Francisco from South Florida to attend the Academy of Art University. Her interest in neon began in a class taught by Bill Concannon and from there her love for it grew. The medium both frustrated and excited her. “It was a challenge,” Pataky recalls of her time starting out, “And I just really wanted to get on top of it. It’s super hard, and I was like ‘fuck this’—I’m not going to let it get the best of me.”

Neon is the process of heating and bending a glass tube, and the glow is achieved when the gas (filled inside the tube) is charged with the current from the electrodes that are placed on the ends of the tube. Neon is a lost art and the medium presents itself as a treasure. The idea that it can not be reprinted or the fact that only one can be found on one wall is something pretty fascinating when you think about it. “It’s a unique beauty,” Bill Concannon says on the phone. “You’re not just looking at a picture of something, you’re actually looking directly at the phenomena of light being produced by electrically charged gases. If you get pretty close you could actually see that.”

Concannon, Pataky’s mentor at the Academy of Art University has been in the neon industry for forty years and has worked on neon special effects for various of films—listed on his resume are Star Wars, Star Trek, Back to the Future, and Ghostbusters to name a few. Pataky graduated in 2010 but she still considers him a mentor whom still helps her out to this day. “It’s like my extended education he likes to call it,” she says. Concannon was excited about her eagerness to learn and is impressed that she’s stayed with the medium in terms of fabricating it directly and is impressed by her technical ability. “It takes a lot of discipline and it takes a lot of repetition to do what she’s doing,” Concannon says. “It takes a lot of mistakes and being willing to work through those mistakes.” She bends her glass tubes in her studio but she takes them over to his studio to fill them with the gases.

“If I tried to bombard my own tubes in here I’d blow a fuse every time and as you could see we’re running off of extension cords,” she explains, pointing at the orange and white wires around the space of what used to be a brewery.

Her excitement and passion for the cosmos, outer space and nature is contagious. In a way, the work she creates reminds us that we’re just a tiny part of the expanding universe and it [the universe] as a source of inspiration shines through her artwork. She walks to a table around a three by six foot panel getting filled with pyrite, also known as fool’s gold, and shares a  calendar with pictures of outer space she got for Christmas. On the pyrite panel, scribbled on the corner of a piece of paper is part of the lyrics to an Everclear song and a sacred geometry outline for a piece she’s working on that’s going to Brooklyn. On the floor and on a table behind her, mini cactus plants are scattered on newspapers and packs of pyrite are on another side table with packs falling onto the arm of a red leather chair by the window. She becomes giddy when she talks about her love for the television show COSMOS and promises to wear her Carl Sagan t-shirt every Sunday [when the show comes on]. Outside of Pataky’s neon world she spends her time being a nanny, riding her bike around, and hanging out with her boyfriend cooking dinners and watching shows on Hulu.

Back at her workstation she’s bending a glass tube in the shape of an ‘x’ next to a little mason jar sealed with cigarette butts and tracks from the likes of The Roots and A Tribe Called Quest are blasting from two little speakers beside her; aligned behind her on a high shelf against a wall are terrarium plants; a mason jar of bullets and another of little skeleton pieces; a small half-muscle half-skeleton figure; and on the floor is a paper bag full of black roses she removed from her triangular “Untitled/Journey” piece that has the letters ‘jer ne’ centered on what’s now its replacement silk black roses next to it.

Resting on the floor, under the pyrite panel, is a deer hide Pataky got from Napa being stretched out for her show this summer. She picks up and spreads open a piece a paper that reveals a Rorschach test inkblot for the deer hide. The Rorschach test is a psychological test that examines an individual’s personality. The gold element she was working on earlier is for her “Golden Hour” solo exhibition at the White Walls Gallery in July. The show will be a continuation of what people are used to seeing from her but an elevation of where she was last year.

“The Golden Hour is all about the sun,” Pataky explains of the show’s concept, “And it’s [the show] sort of paying an homage to our mother sun and meditation on the immeasurable.”

The materials she’s using are more periodic elements and the pyrite going on one of the panels symbolizes the sun.

“A single tube of large neon will go vertically up the panel and with the wood slightly curved, the hope is that the light will sort of diffuse and dissipate as it goes out and I hope it’ll look a little cosmic,” she says of her vision for the pyrite-filled panel.

The other three by six foot panel she’s doing will be filled with cacti with a big neon sword that is representative of the Ace of Swords tarot card, which symbolizes a dominance or defeat of challenges. She thinks the outcome of these pieces will be her proudest creations yet. Recently, the stress of it all had been getting to her and she was beginning to doubt herself but an ease befell her one night, after a long day at the studio, when she was shuffling tarot cards and the Ace of Wands popped out of the deck.

“The Ace of Wands symbolizes creative enlightenment,” Pataky says, “And when it popped out of the deck it was a reassurance and validation that everything’s okay, my work’s okay, and I’m on the right path.”