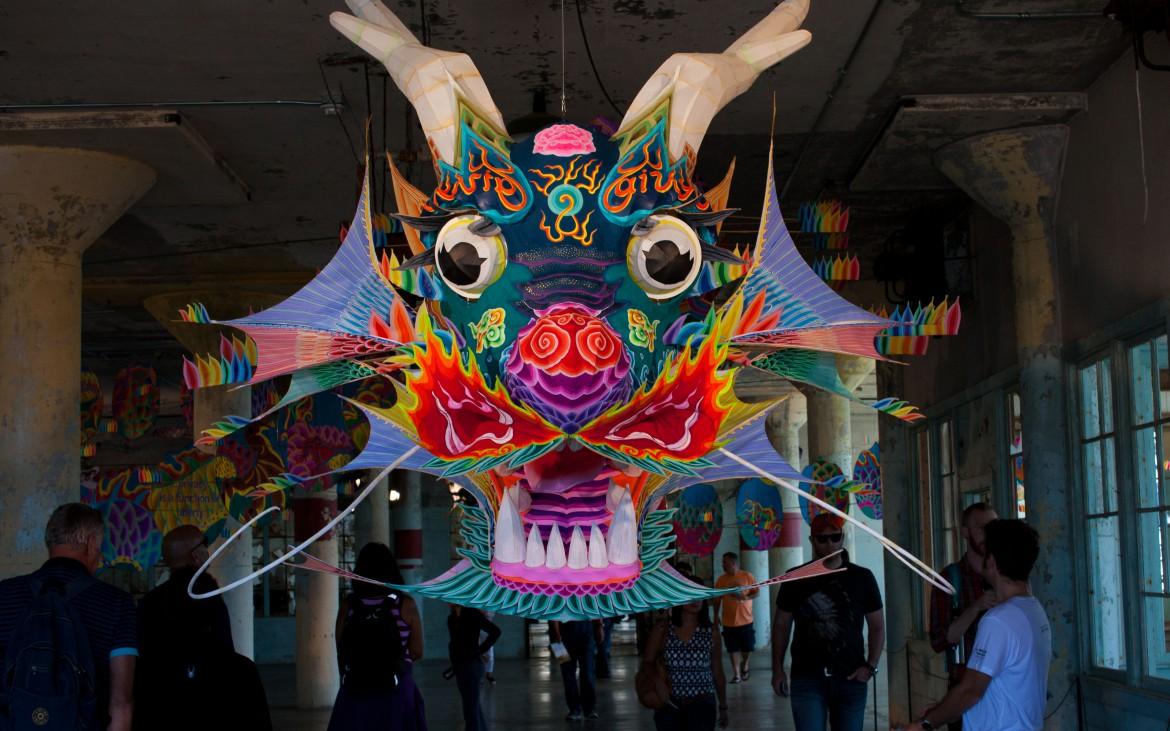 "With Wind" represents "not imperial authority, but personal freedom." Photo by Brenna Cruz/NPS

Starting today, September 27th, a seemingly unusual partnership starts on Alcatraz Island. From now until April 26th 2015, Chinese artist and activist Ai Weiwei’s exhibition @Large: Ai Weiwei on Alcatraz will be shown on the historic federal prison island turned national park site. The significance of this? For starters, this artist will not be attending his own show.

Well, at least not for now. The artist is, and has been, banned from leaving China since April of 2011, and will continue to be indefinitely until Chinese authorities allow him access. He was originally detained for eighty-one days on the premise of “tax evasion,” but has continued to be detained because the Chinese a government suspects him of “other crimes.” Others say it is because Chinese authorities have not liked Ai for some time because of his outspoken politics and art.

Ranked in the top twenty of most influential artists in 2011, it is not hard to believe that Ai has a huge following online, with about one hundred and two thousand followers on Instagram and more than two hundred and fifty-five thousand followers on Twitter. Hashtags including #aicantbehere, #passportnow, and #flowerforfreedom are dedicated to the artist and his work and have been spreading across social media. Since his the first day of his detainment, the artist has taken a picture of flowers on a bicycle and posted it on social media daily, symbolizing his inability to travel; some followers have done the same to show their support of the artist.

So, how is it this show came into fruition then? Curator and executive director of the For-Site Foundation, Cheryl Haines, took it upon herself to come up with one of the most symbolic while slightly ironic places to hold the exhibition. Haines has been planning with Ai since his release from jail two years ago, when she offered to bring him a prison for his work to be featured in.

“This exhibition is a very large undertaking for our foundation and addresses some very basic issues important to us all, the need for human rights, freedom of expression, and the role that communication plays in creating a just society,” said Haines in an interview with SF Gate.

Many of the pieces in this art show are a part of a larger global discussion – that of prisoners of conscience. The goal of this initiative is to draw attention to other activists and political prisoners locked up or put under house arrest globally, and the injustice in such a system that allows this. The exhibition includes pictures of one hundred and seventy-six prisoners of conscience, including Edward Snowden, Chelsea Manning, and Martin Luther King Junior, made out of one point two million LEGOs and then constructed by volunteers in San Francisco following more than two thousand sheets of instruction put together by Ai.

“Alcatraz has been a place for movements of freedom to be seen ever since the indigenous people occupation in the 1970s. With Ai Weiwei’s exhibit, this brings the same conversation to a global scale,” says Alexandra Picavet, public affairs officer for Golden Gate National Recreation Area.

Entrance to see @Large is technically free, because Alcatraz Island is a National Park site, but the ferry ride over to the island via Alcatraz Cruises is $30. Other packages are available as well, with things like the early bird special and gift for $50 and a guided tour plus the gift for $125. You do have to make sure you purchase tickets in a bit early – they tend to sell out a few weeks in advance.

But this show is much more than LEGOs. Every part of the exhibit intends to send a message; a colorful dragon kite representing personal freedom, porcelain flowers in sinks and toilets representing the comfort flowers could bring to prisoners, and a giant wing, made out of repurposed Tibetan solar cookers and kettles, representing freedom that can be viewed by visitors, but not accessed are just a few of the pieces of the exhibit.

Although it is also aesthetically pleasing to visit, @Large raises more important questions than “why did he chose that color over this other one?” It brings visitors and onlookers to think about what exactly constitutes right and wrong, who deserves to be treated like a criminal, who does not, and what type of society we live in now, the year 2014, that would allow this and many other injustices in the world.

As Ai has been quoted time and time again, “If there is no freedom of expression, then the beauty of life is lost. Participation in a society is not an artistic choice, it’s a human need.”