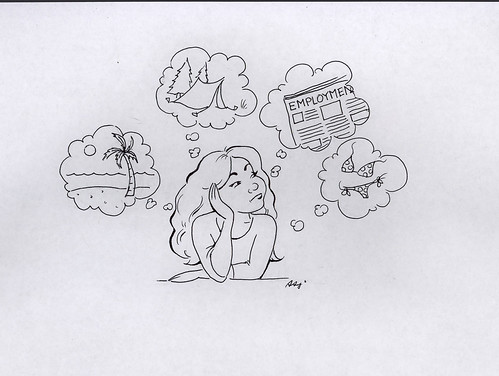 Room 278 in the HSS building at San Francisco State University sits quietly until the clock hits 4:00 pm, when slowly, students one by one enter the room. They know the weekly routine and arrange the desks to make a complete circle at the front of the classroom, just like Professor Salomon-Johnson asks. Today, the circle is quite empty as most students are missing. Jaye Cho walks into the Comparative Border class and picks a seat. The professor looks around and announces that only a few have turned in the midterm paper, hinting there are only four hours left to finish it. Cho’s nervous smirk-like frown reveals she has yet to start the midterm for the class, which is due today at 11:30pm; this also explains why hardly anyone is present.

Nothing is as dreadful as the last couple of weeks before spring semester ends. While some students are carefully planning their final projects, making sure to set aside enough time to study, most are wisely procrastinating as the marathon of sleepless nights commences. The month of May brings with it a sense of relief that the semester is finally ending. As the days get sunnier, it is clear that summer is upon us and school is almost out. Spending those first summer days finally relaxing and enjoying the city can bring consolation knowing there are no more deadlines, tedious papers or exams to turn in. The weekly drag of waking up early, taking the shuttle, Muni, or BART to get to school is now a thing of the past. As hard as this is to imagine, especially in San Francisco, spending the whole summer just relaxing can get quite old after the third, fourth or fifth week. For college students, summer does not have to consist of only unwinding. It can avenue as a chance to explore hands-on opportunities in majors or other interests, by finding internships or summer trips.
This summer, Cho is joining her fellow colleagues in going to the Philippines on an education and exposure program called Baliksambayanan (otherwise known as BSB). The League of Filipino Students at SF State (LFS-SFSU) organize and fund raise the annual month-long summer trip, which encourages students to directly integrate with various sectors and organizations that range from youth and students to indigenous communities. “Through direct integration, we get an in-depth understanding of the struggles the Filipino people face each day, and the organizing work they are doing in order to fight for genuine change and democracy,” says Cho.

“Everyone needs and probably deserves the time off for summer. However, it helps to do something school related to keep your mind active.””

Being active in LFS-SFSU for five years, Cho has been waiting for the right summer to attend the trip. “It’s one thing to learn about social issues and movements in a classroom or a textbook, but to hear the stories and experiences from the people who are actually being directly affected by discriminatory governmental policies that fail to provide them adequate access to jobs, health care and education is a whole different lens that we do not have the opportunity to hear in the mainstream media in the US.”

For geology student Matt Burnett, his fifth year of attending SF State is trailing along as he looks forward to concluding his college years. The geology major program at SFSU requires students to either do research and write a thesis, which takes two semesters, or take a Summer Field Course as a capstone before graduation. “I don’t feel like coming back for another year to do research and thesis when I can just take a month long field course instead,” says Burnett. The course will be from June 10th until July 11th and will take place in Ruth, Nevada. This trip gives students a real sense of geology fieldwork and of what mapping consists of, as they will be working full time-six to eight hours a day, six days a week. Spending most of his summers working or taking summer school at SF State, this will be an interesting change for Burnett. “Everyone needs and probably deserves the time off for summer,” comments Burnett. “However, it helps to do something school related to keep your mind active and to help retain the information you’ve gained during the previous semester.”
She sits on her bed sporting a black and orange Giants rubber band bracelet, a black and orange SF emblem necklace and a black Giants t-shirt that says “Beat LA” in white. It is 3:23 pm and Mariamargarita Diaz has a couple of hours to finish her geometry homework before the Giants game against the LA Dodgers. “I’ll never get this shit,” she claims as she gives up and turns on her Macbook to find Youtube videos that can better explain centimeter dot problems. The child development major is trying to get through this one class, Intuitive Geometry, that has be a burden since the beginning of the course.

After finishing this semester, Diaz is looking forward to her job as a teacher’s assistant for various preschools in the San Francisco District. Diaz still has a year left at San Jose State, but thought getting a jump-start at finding jobs or internships for the summer would help her gain experience, not to mention how good it will look on her resume. “I just went on Craigslist and saw there were job openings for teacher’s assistants,” says Diaz. “Luckily they only require you to have at least 12 child development units, so it worked out for me.” Diaz has spent the last four summers working full time to support herself financially, but this will be the first summer she is going to be working at a job relevant to her major. “It’s hard to get involved and actually find something that relates to what you’re studying,” she admits. “But the hard work of constantly looking will pay off. I mean, I’m really looking forward to working with kids.”

“It’s hard to get involved and actually find something that relates to what you’re studying. But the hard work of constantly looking will pay off.””

Those who cannot commit to a long internship or are still having trouble finding a job related to his or her major, volunteering in San Francisco can be just as proactive and rewarding. March kicked off the first of many events for Sunday Streets, “San Francisco’s official block party.” Event coordinators, with the help of police officers, close off the streets to cars and allow bikers, pedestrians and other characters to take over, in the effort of getting people out and be active. There are various organizations posted throughout the streets as well as fun activities for everyone to enjoy. During last year’s Sunday Streets in the Mission District, organizers rented out roller skates to anyone wanting to get on the dance floor and get down to Micheal Jackson’s greatest hits.
For students who enjoy live music, volunteering at the Stern Grove Festival this summer can allow you to be apart of their annual summer concert series, even earning some college credit, depending on how many hours of volunteer work are completed. It is a different experience when being apart of the team that creates events like this festival and can turn out to be more memorable knowing you got involved.

Students who want to integrate within a community, there are numerous food drives that need volunteers on a weekly basis. Arriba Juntos hosts a weekly food drive every Thursday, where they give away produce, along with other products to low income families. The non-profit also offers classes and other services where college students can join and become part of the team of teachers and advisers.

Programs like these are offered almost in every neighborhood in San Francisco. Whether it is helping out in weekly food drives or organizing for a specific event, being proactive and getting involved is what college years are all about.

Then sun is dimming down behind the Daly City hills where Cho offers her house as the meeting stop for the LFS members considering to attend the trip to the Philippines. The eight students crowd around Cho’s living room and discuss the agenda of what needs to be completed in order to start preparing for the summer trip. The way they talk about previous experiences and laugh over incidents the anticipation fills the room as they await anxiously for their summer trip to the motherland.