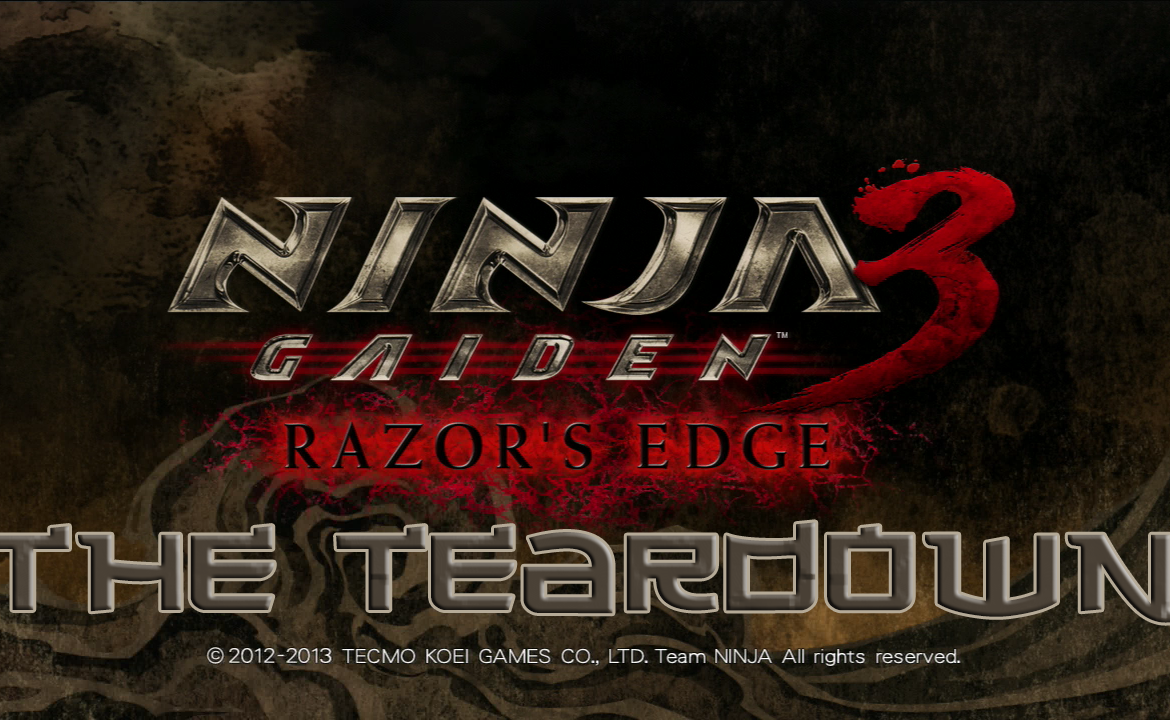 Platforms: PS3, Xbox 360, Wii U
Release Date: April 2, 2013
Average Scores: 67, 70, 69
I spiked my controller to the ground at least twice while playing Ninja Gaiden 3: Razor’s Edge. That is the joy of having wireless controllers; you get the ability – nay, the privilege – of throwing them in a bout of frustration.

I was at the final boss fight. I was dying over and over again. I had been playing this game for far too long. I had had it up here with all the bullshit in Ninja Gaiden 3: Razor’s Edge. So, after about forty minutes of getting pounded into ninja-flavored pulp, I snapped. Lightly, but a snap nonetheless.

It felt both terrible and great to throw my controller. Terrible because fixing a controller is tedious; I have had to do it a couple times already – probably to that same exact controller. But it felt good, cathartic even, because I finally got whoop some ass in something while Razor’s Edge was burning in on my television screen. I was not kicking ass in Razor’s Edge, but close enough.

Tossing the plastic hunk of buttons was a build-up of hours of frustration that stemmed from the trashy, tedious combat. The original Ninja Gaiden Sigma and Ninja Gaiden Sigma II are some of gaming’s essential swordplay combat games. They still, to this day, remain the fastest, most satisfying melee combat games around. Conquering any of them was not only fun but also a badge of honor since beating that final boss was an earned achievement.

To even endure fifteen minutes of Razor’s Edge is an achievement because the game starts off on the stupidest foot. The once-pristine way in which Ryu, the main character, would cut down ninja has been neutered, devolving into a generic sludgy mess that it never recovers from. Every move, from attacking to the ever-important dodging, felt like it was on some sort of time delay, which is not too great if you have a red-cloaked master ninja trying to cut you into confetti. Or when you are trying to fight German Shepherds that can somehow dive bomb you. That is actually quite impressive. I cannot even get my parents’ German Shepherds to not poop in the garage – and these dogs are fighting ninja. I need to hire a dog whisperer or something.

If a scene has a woman in it, you can move her boobs by by jiggling the controller. I am of two minds on this. It is stupid that the developers over at Team Ninja think this objectification is somehow attractive. Maybe it is a culture thing although that does not excuse it. On the other hand, it is so over-the-top and stupid, that I sort of found it funny to make the silicon valleys look like they were trying escape their prison within each woman’s inflated chest. The awful, cringe-inducing drama only got somewhat entertaining when I could make the breasts comically gyrate around. It did not salvage the story by a long shot though. Just some unintended comic relief.

But nothing could relieve me from actually playing Ninja Gaiden 3: Razor’s Edge, mainly because I had already played its other iteration, simply called Ninja Gaiden 3. That was such a failure that it warranted a re-release here in the form of Razor’s Edge. How lame is that? Team Ninja got two steps up to the plate and horribly struck out both times. The game’s repulsive art style, awful combat, and abysmal narrative make this game unpleasurable to all of the senses. I bet the disc even tastes like generic trash. I am never going to play another new Ninja Gaiden game again. I am just going to stick to the first two in the series, which are the only ones that have actual care put into them.