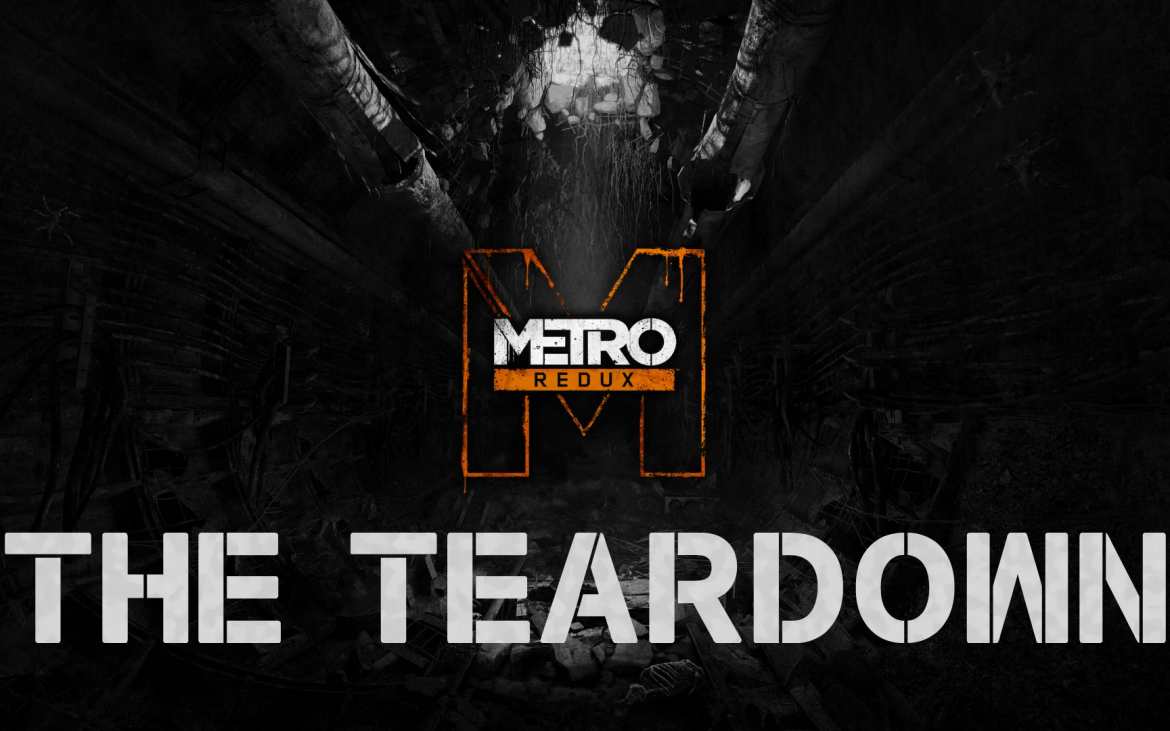 Platforms: PS4, Xbox One, PC
Release Date: August 26, 2014
Average Scores: 83, 84, 84
I saw the Gamefly envelope resting on my bed and my heart sank into my gut (which could have been Doritos-flavored Mountain Dew now that I think about it). I had one thought: “Fuck. This better not be another Ninja Gaiden game.”

It could have been My Little Pony Sim 2014 or “Game of the Century” Cory in the House, one of which is a real game; I did not care. Just not another Ninja Gaiden game, please. Thankfully, I was greeted with this on my PS4 dashboard upon inserting the mystery disc:

No more garbage combat. No more cringeworthy stories with awful one-liners. I was free.

Well, not entirely free. I still had Metro: Last Light: Redux to play… again. I had already suffered through the regular version of Metro: Last Light last year, but Ukranian developer 4A Games had the bright idea of remastering this “classic” to reach a new audience on new consoles with prettier visuals.

But no one was complaining that Metro looked like hot street trash. Hell, not many were even complaining about Metro at all. To my surprise, Metro was met with great reviews and decorated with awards from the media and fans alike.

It looks great and knows how to set a mood – I will give it that – but playing it was more frustrating that riding an actual metro in San Francisco. However, it did have the same amount of brown coat-wearing drunk white dudes. A mere coincidence, probably.

Metro tosses you into a myriad of narrow tunnels, each filled with more things to shoot than the last. The problem is that sneaking or shooting through these situations is always a headache. Stealth sucks because of the shoddy enemy intelligence. They are either brain dead stupid or hyper intelligent super soldiers. Or, to break this down more: all human enemies possess the mind of Stephen Hawking or the mobility of Stephen Hawking. There is no middle ground.

The mutated freaks, which I can just assume is what most Russian men look like when they do not get their hourly vodka shots, take home the grand prize in being generally about as pleasant as putting a toothpick under your big toe and kicking the nearest wall. They will sprint right up in your grill and mosh like some metal heads, lopping off large amounts of health and even larger amounts of patience. Escaping is not an option because backpedaling makes the main character, Artyom, move at half his normal speed. So the most natural movement that someone would use when confronted by horribly disfigured beasts is significantly hamstrung when you need it most. It does not make a lick of sense.

In a game where you can shoot dog-size bears and bear-sized dogs, this is what made the least amount of sense: not being able to move at a consistent speed. When the playing part of your video game sucks, that is not a good sign. However, the nearly-transparent strokes of a well-made game are in the periphery but lost in the thick, burnt weeds of the nuked-out landscape of stupid design decisions.

But maybe I am just ignorant to this whole game’s message. Maybe this is just how Russia operates. Maybe this game was an accurate representation of day-to-day Russian life: it is frustrating, filled with awkward sexual encounters, and dangerous to explore the irradiated surface without a gas mask. Maybe it is a just another reminder of how awesome America is. You know a good post-apocalyptic game? The Last of Us. You know where it takes place? America. That is no coincidence. Suck it, Putin. I am putin you, your country, and your country’s representative game in its place: back in the mail and to Gamefly’s headquarters because I am not ever playing this game again.