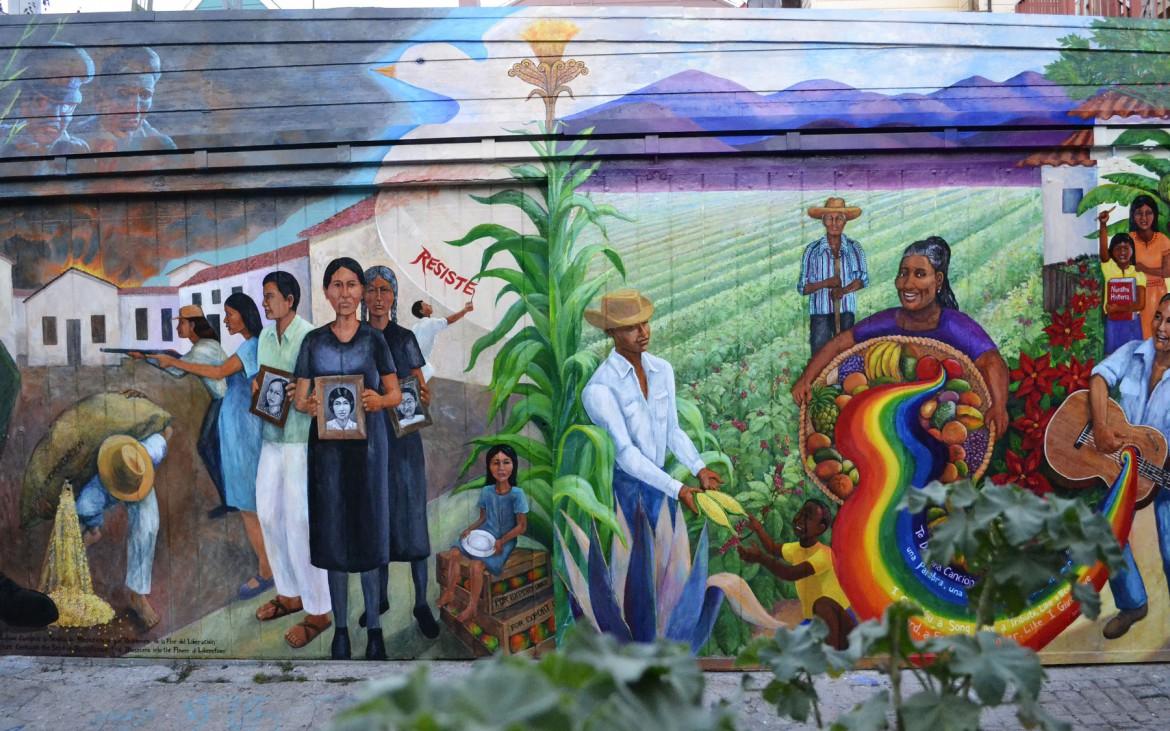 Culture contains the seed of resistance.

Latin music floated down the street, artists painted on wooden fences, and over one hundred people stopped to admire the vivid, aged, and descriptive murals that lined the walls of an alley tucked away in the heart of the Mission.

Local vendors, musicians, and community groups staked out along the alley to rally onlookers.

People of all ages and backgrounds flocked to the Balmy Alley Community Celebration on October 19th to honor the unveiling of the refurbished mural painted by PLACA muralists Miranda Bergman and O’Brien Thiele, and the screening of the new documentary, “PLACA” by event organizers Carla Wojczuk and Julian Rowand.

Bergman, sixty-seven, from Oakland, and Thiele, seventy-three, from Berkeley, painted their mural, “Culture Contains the Seeds of Resistance that Blossoms into the Flower of Revolution,” thirty years ago in 1984 during the Nicaraugan Revolution.

The two hundred square foot mural is painted on two sliding doors of an old stable, and depicts two different worlds in Central America during Ronald Reagan’s Presidency and the Contra War.

Reagan’s snarling face with clouds overhead, and Nicaraguans armed with artillery and holding pictures of their loved ones who had been killed by the war, is painted on one of the sliding doors. Rich abundant crops of corn, joyful farmers, colorful fruit, and a mother sending her daughter to school cover the other sliding door.

Theirs’ was one of the many murals created by the PLACA project, a rallied group of thirty community artists from the Bay Area who painted murals on Balmy Alley that protested against Reagan’s policies and demanded liberty in Central America.

Bergman says the group chose the name PLACA because it meant to make a mark.

“It was to leave a mark, to make a sign, about what we, and probably a majority of people in the U.S., were opposed to happening [during the Contra War] in our name,” Bergman says.

PLACA received a $2,500 grant from the Zellerbach Foundation that only covered the cost of paint, and the rest of the materials and labor was volunteered.

“We felt like showing, demonstrating with our paint and brushes, that we could transform this alley. We could and we did,” says Bergman.

Thiele says the organization and work of PLACA was a call for action.

“As artists, we get very excited when we’re doing something positive, saying ‘I don’t like this so I’m going to paint about it,” says Thiele.

Thiele says a strong sense of camaraderie filled the alley as artists gathered to paint their opinions and statements about the government’s actions.

Over the span of several months, the walls of Balmy Alley were no longer bare but covered with twenty-eight murals about the injustices and consequences of the Nicaraguan Revolution, Oscar Romero and the Guatemalan Civil War.

Bergman says the bustling of activity and painting of the murals in 1984 was a metaphor for transformation.

Decades later, younger artists took over the walls of the alley and painted new murals that tell different stories and speak out against different injustices. One by one PLACA murals were given a different coat of paint, but “Culture Contains the Seeds of Resistance” remained and is the last full PLACA mural standing.

Wojczuk, thirty-two, says the power of storytelling, its influence to unite groups and act as a form of resistance, was her inspiration to create a documentary about PLACA.

“This collective of artists that came together and painted murals on the whole alley, it felt like a very powerful moment where the crossroads of organizing, political activism, art, and social consciousness and celebration met,” Wojczuk says.

Wojczuk and Rowand began making the documentary in 2013 and completed it this October.

Sharing the rich history behind the pictures on the alley walls was another inspiration for Wojczuk to create the documentary, and organize the community celebration.

“I wanted people to feel honored and never forget the fact that there is local history right in their backyard,” Wojczuk says.

Paying homage to the founders of Balmy Alley, and the seeds of transformation and creativity PLACA members planted in their murals, was a goal Wojczuk aimed to achieve in the documentary. To allow current demographic and cultural change erases remnants of the past is a trend Wojczuk is determined to stop.

Change is undeniable in the Mission, with gentrification of the tech and startup employees moving in, and families who have lived in the neighborhood for generations forced on the daily to leave their home.

A majority of PLACA artists were forced to leave the Mission and move to different parts of the city or different cities.

“Just about all the artists that have painted here can’t live here anymore, they can’t afford to live here,” Bergman says.

Bergman grew up in the Mission, and was forced to move to Oakland.

Bergman and Thiele noticed the change rapidly affecting their old neighborhood, and change was one of their motivations to restore the mural.

“We just really wanted to return, and it was super interesting to see that return. The neighborhood has changed,” Bergman says.

“Restoring the mural is a resistance to amnesia, remembering this time for the whole history of San Francisco. Balmy Alley is famous now,” says Bergman.

Despite new additions to the Mission, Bergman and Thiele’s mural will hold its ground for a couple more decades, and both Bergman and Thiele can count on the community for support. The whole alley was hushed to a whisper when the mural dedication and blessing began. A hundred people gathered around the mural, and listened to Bergman and Thiele share their story behind the painting, and their message.

“Part of the restoration is really encouraging and inspiring some creative thinking. What can you do? What do you want to do? What is possible? Because history has shown us over and over again that it always start with a small group and things don’t have to be connected in any obvious way,” Bergman says.