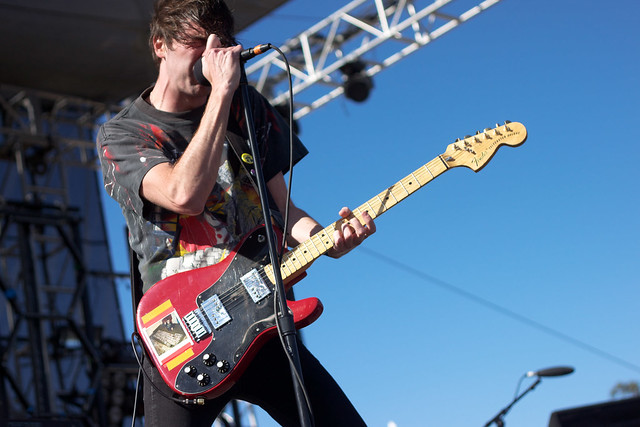 Cut-offs and snap back hats filled the Los Angeles historic park Saturday, September 3rd for the annual Fuck Yeah Fest, except a few things this year were different. Event production giants, Goldenvoice, teamed up with festival founder Sean Carlson and his team, renaming the festival a more appropriate FYF Fest and making some adjustments that veterans noticed and newcomers appreciated.

Goldenvoice took the previously DIY festival to the next level with increased security, minimizing the wait time for concert go-ers to get their bags and tickets checked. As the line moved, knowledgeable veterans were overheard mentioning the improved organization, comparing the10 minute wait this year to nearly an hour the year prior.

The six stage festival was already crowded when it began at 1pm, and by 4pm, the attendance was so high cell phones were losing service, noticeable by the amount of lone girls stumbling around the grounds, some of which were (stupidly) wearing heels.

Beginning with the lesser known acts, the afternoon was kick started by an energetic set by the Tijuana Panthers, surf-rock band from Long Beach. Tijuana Panthers thanked their crowd for making it to the festival so early. Though the festival had huge, professional, stage set ups, the band members were nearly lost in a sea of dust kicked up by kids moshing and dancing in the front rows.

Truly completing the LA hipster vibe of the festival, vendor booths were set up in a “Vendor Village” away from the stages. A variety of sunglasses, vintage renewal skirts, and vintage dresses were available for purchase, along with truck beds full of records. Inbetween sets or while waiting for a favorite artist to go on, crowds hovered over bins of records and tried on skirts over their clothes. 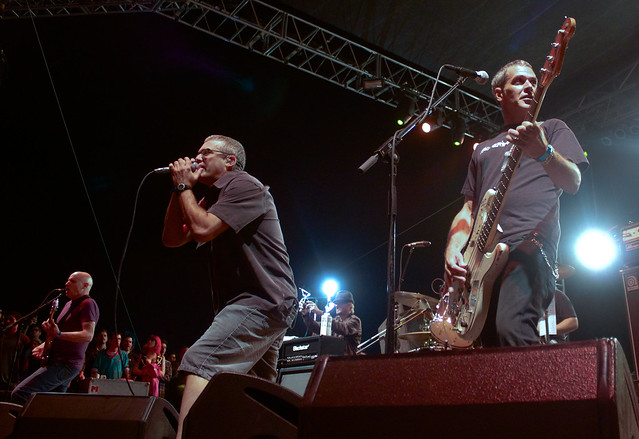 Leon Cortes, a San Francisco resident noticed significant changes in this years festival, “there was way more food, and free water. Last year water was $5, I think bottled water was $3 this year,” he said. Having trekked down from San Francisco the past two years to attend the festival, Cortes credited this year with being far superior, with much quicker entry and cleaner, more abundant, bathrooms.

By mid-afternoon, the lines at the food trucks were nearly an hour long. True to the LA food truck culture, FYF had half a dozen food trucks with treats ranging from ($12) cheesesteaks, to Korean food. With so many options, some groups of friends separated waiting in different lines, seeing who got to the front first as The Cold War Kids sounded in the background from the main stage.

“This song is such a bummer, I just cried about it backstage,” joked Smith Westerns front man Cullen Omori to a crowd not so patiently awaiting the next song. The Chicago indie rock band drew an impressive crowd mid-afternoon. Despite a few similar cheesy remarks, the band seemed to have mastered the act of performing a festival set, after being booked at festivals worldwide this Summer, including playing Pukkelpop on the stage that collapsed, killing five audience members.

San Francisco seemed to have a large presence at the festival, causing the crowd to scream every time a band mentioned the city. The Strange Boys, Texan garage rockers, gave a shout out to fellow FYF performer, Ty Segall and “all the homies in SF.”

San Francisco band, Girls, surprised their enormous crowd by including three female gospel vocalists in their performance. Also to the audience’s surprise, Girls played their biggest hit, “Lust for Life” as their opening song, and followed it with arguably their second biggest hit, “Laura.” The band then progressed through their set playing tracks off their upcoming album, “Father, Son, Holy Ghost,” out September 13, sprinkled with other familiar favorites from their debut.

As the sun went down, the atmosphere of the festival drastically changed, transitioning into a chilly 60-or-so-degrees, causing scantily dressed girls to scurry to the vendor tents to find a sweater. An older crowd emerged at nighttime, likely attracted to groups such as The Descendants, Guided by Voices, and Death from Above 1979, who were founded years prior to most of the lineup.

Electronic acts such as Chromatics, Nosaj Thing, Dan Deacon, and Simian Mobile Disco were clumped together in the evening, providing a surprisingly gradual shift from a garage to electronic, having Simian, the most “club” sounding, play last.

When Death from Above 1979 broke up in 2006, the hearts of rock n rollers broke, and many current fans had never even heard of them until after their breakup, with no hopes of ever catching a live show. The duo, which includes JFK of DJ duo MSTRKRFT reunited at SXSW and were included on the Camp Bisco lineup. Headlining FYF Fest gave many Californians the chance to rock out to “Romantic Rights” and “Little Girl.”

By nearly 1 am, shivering masses poured out into the streets of downtown Los Angeles, gossiping about their crazy experiences, and heading back to their cars parked in $20 lots to call it a night.

“It was hot, dusty, but I wouldn’t of had it any other way,” said SF State junior Scott Sanders.