A Change Is Gonna Come 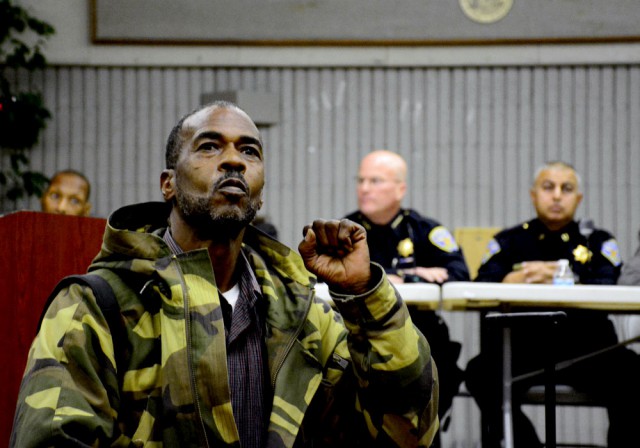 A community member by the name of Kilo G holds up a fist in front of a panel of SFPD members including Police Chief Greg Suhr during a community forum regarding the death of Mario Woods.

Riot gear hung from the tense hands of three rows of San Francisco Police Department officers, positioned austerely on the steps of San Francisco City Hall to fortify the entrance against the crowd assembling out front. The protesters facing them raised their hands high in the air – some with their fists fiercely clenched, others holding signs emblazoned with the face of Mario Woods, the 26-year-old Bayview resident who was gunned down by five SFPD officers in December of last year.

The tense atmosphere was interrupted by feedback from the loudspeaker fastened to a wheelchair laden with nothing but audio equipment. A young protester grabbed the microphone and began singing Sam Cooke’s “A Change Is Gonna Come,” a song recounting the racism Cooke endured during the Civil Rights Era. She glared into the eyes of a black officer, unintimidated by the army of riot police standing in her way. Singling him out amidst his white counterparts, she forced him to question which side he truly stood on. “You in the middle!” she exclaimed just before she broke into the song’s chorus, “It’s been a long, a long time coming. But I know a change gon’ come!”

In these early months of 2016, San Francisco has experienced a resurgence of activism that initially gave this city its progressive reputation. With the shutdown of the Bay Bridge on Martin Luther King Jr. Day and with the recent protests over the fatal SFPD shooting of Woods, it is clear that wounds are still fresh for San Francisco’s black community.

According to U.S. Census Bureau data, San Francisco’s black population decreased by nearly 54 percent since 1970, falling to 5.2 percent in 2014. Along with the population, black homeownership is concurrently in decline. While the killing of Woods catapulted this wake of civil unrest, the outrage in the black community stems from decades of policies – from urban renewal and gang injunction lists to gentrification and violent policing  – that, according to Reverend Arnold Townsend, have targeted black people in San Francisco and perpetuated their exodus.

“Racism is in the political DNA of San Francisco,” Rev. Townsend, a local NAACP board member, said. “They [San Franciscans] never talk about or admit it, which means you can never eradicate it. You can’t fix it unless you first acknowledge that it exists.”

Though the black community has called San Francisco home since its inception, the city saw its largest in-migration of black people during World War II. Black families were relocating to metropolitan areas from the South to work in shipyards, taking advantage of the profitable wartime industry. The black community flourished until 1970; thereafter, the population decreased as San Francisco policy disproportionately affected black people.

“I think the most difficult thing for people to grasp when they look at the black community in San Francisco today is that we have not always been a poor community to the degree we are now,” Rev. Townsend said. “The economic downturn for blacks is the most devastating thing there is.”

The economic downturn Rev. Townsend speaks of began in the 1960s with urban renewal, the federally funded demolition of primarily poor, non-white neighborhoods in the interest of revitalizing those areas. The San Francisco Redevelopment Agency claimed eminent domain on the Western Addition, eventually leveling 60 square blocks, displacing thousands of residents, and refusing to redress the community they forced out.

The redevelopment project destroyed the prospering black community that had established itself in the Western Addition only two decades prior, following the internment of the preceding Japanese American residents.

“There is a plan that has been in place, that began … when the redevelopment agency came up with urban renewal … which turned out to be Negro removal,” Archbishop Franzo King of the Saint John Coltrane African Orthodox Church and Justice 4 Mario Woods Coalition said. “It’s beyond a trend but a plan that the enemy of the people has put in motion. This is where the redevelopment agency began its mayhem and its attack on the black community in San Francisco.”

Decades ago, the Western Addition was known as “The Harlem of the West” and acted as the beating pulse of San Francisco, fostering a vibrant community and stimulating black culture. Hundreds of black-owned businesses – restaurants, salons, book stores, hotels, and jazz clubs – lined the neighborhood blocks. But as black people were pushed out of the city, their culture and institutions left with them.

City policy ushered in displacement and uprooted people from their homes, which extracted power from the people and ultimately disenfranchised the black community as a whole. As the black population diminished, those that remained struggled to identify with their transforming neighborhoods. The black population was stripped of its autonomy; consequently, turbulence befell the community and gave way for crime to transpire.

“When I was in high school, my neighborhood … had one of the highest murder rates in the Bay Area,” said Etecia Brown, community organizer for The Last 3% of Black SF. “And so what you saw was a gang injunction list being implemented. If you’re put on the gang injunction list then you’re automatically barred from having public housing. What you saw then was a rampant rise of gentrification and displacement.”

To address the high crime rates in communities of color, San Francisco implemented gang injunction lists and divided the city by alleged gang territories. The repercussions of being on the gang injunction list extend beyond the presumed gang member; whether it be their grandmother, their sibling or their spouse, anyone directly associated with a person on the list forfeits their right to affordable housing.

According to the American Civil Liberties Union of Northern California, these lists inaccurately mark young people of color as gang members with no evidence or indictments to justify their claim. Those on the list are legally restricted from returning to their neighborhoods, and if they commit a crime, they face an additional seven years on top of their sentence for their presumed gang affiliation.

“Really, when you look at our community and see how much we’ve been impacted by arrests and mass incarceration, more specifically gang injunction lists that target black and brown people living in public housing, that really feeds into freeing up housing and land and property for these gentrifiers and these redevelopment agencies,” Brown said.
As black people overcrowd jail cells and policies forcibly remove them from their communities, the black population in San Francisco diminishes and space becomes available for the wealthy – for those who desire the urban areas currently occupied by the poor.

“African Americans have been dealing with involuntary relocation and displacement well before today,” said Thea Matthews of Black.Seed, the black queer liberation collective responsible for the Bay Bridge shutdown. “It is reaching a climax because of the residual, blatant disregard for black life.”
While the black population in San Francisco is nearly five percent, black people account for more than half of the county jail’s population, according to a city report issued in 2013. At times, as in the case of Woods, they do not even make it to the jail cell before they are killed.

“There was a point in which the executions of Black and Brown lives became again completely intolerable for a new generational wave of Black Americans,” Matthews said. “From Trayvon to Oscar, Alex to Mario, and countless others, these martyrs for the movement remind us of a failed U.S. criminal justice system; and the time to respond, act, and dismantle is now!”
City policy has historically debilitated the foundation of the black community; the killing of Woods was just the last straw. San Francisco’s black community is mobilizing to reclaim the power taken from its people and is refusing to let racism dwindle its population anymore than it already has.