Needles in a Haystack : San Francisco and the Path to Safer Drug Use 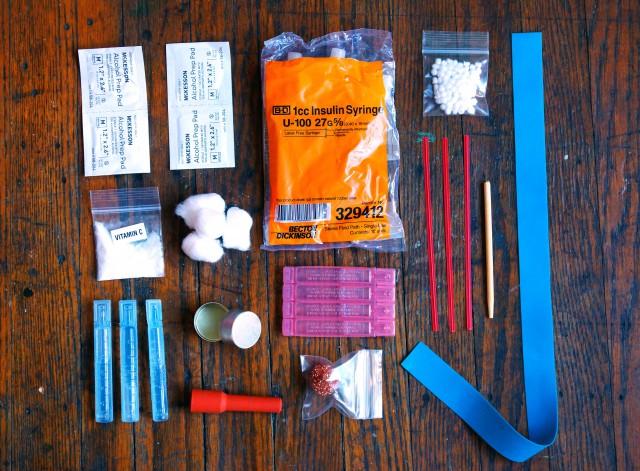 Michael Siever sat comfortably on his purple couch, sunlight pouring into his Victorian apartment and highlighting his grey mustache and silver hooped earrings. His bracelets jingled as he reached for a safe-injection kit amongst the clutter of his bohemian-style living room. “The things you’ll find in the house of a harm reductionist,” Siever said as he unzipped the black case, removing the sterile supplies one would use to shoot up heroin or meth safely. After more than 40 years of work as a harm reductionist, a licensed psychologist and a drug user with a PhD, Siever now kicks back with a cup of tea in hand, taking full advantage of his retirement.

According to city health officials, there was an estimated 22,500 people who inject drugs in San Francisco in 2012. Such high rates of drug use across the Bay Area prompted harm reduction programs like the San Francisco Drug Users Union (SFDUU) to blossom within the city, providing drug users with services –from syringe access to overdose training – that encourage safe drug use rather than demanding immediate sobriety.

“One of the original and often still-used taglines of harm reduction is any positive step, any little step no matter how teeny in the direction of being more healthy and happy, is a good thing,” Siever, CEO of the San Francisco Drug Users Union, said. “You don’t have to have the bar set so high that you are either abstinent or you’re a failure, which was kind of the traditional ruling. The traditional approach is so shame-based and kind of tears people down in a way that I find appalling.”

Siever, also the founder of the Stonewall Project–a counseling program providing harm reduction treatment to gay and trans men that use drugs–and former director of behavioral health services for the San Francisco Aids Foundation, has been involved with harm reduction since its inception in the U.S. He recalled a time decades ago when harm reduction first emerged in San Francisco out of the HIV epidemic.

According to Siever, the board of supervisors would declare a state of public health emergency every two weeks to create a legal window for needle exchanges to take place, so people who inject drugs could get sterile syringes to not spread HIV.

“The many years of the HIV epidemic–when people were dropping like flies and you’d spend all your weekends going to memorial services until you were so numb you couldn’t do that anymore– enabled us to push bureaucracies, governments and agencies to do needle exchanges,” Siever said.

In 2000, the San Francisco Health Commission unanimously passed a resolution requiring programs that serve drug users to adopt the harm reduction philosophy. This policy enabled organizations across the city to implement needle exchanges and deter unsafe drug use.

“The misconception around harm reduction seems to occur when people don’t realize it’s part of an overall health continuum for drug users – or when people feel it enables or encourages drug use,” SFDUU Project Coordinator Holly Bradford said. “We save lives, we have healing relationships with our participants, we help people be safe, we offer referrals, and we clean the neighborhood of publicly discarded syringes.”

“The other trend I see are drug users living longer,” Bradford said. “They are not getting HIV, AIDS, or HCV like they were back in the day, they are saving each other from overdose everyday across the country, they are less likely to get infections and abscesses. Harm reduction is a scientifically proven, cost efficient public health policy.”

Since 1987, Bradford has been devoted to the drug using community. With a resume extending three pages long, Bradford’s dedication to harm reduction is unarguably clear. On the SFDUU website, Holly is pictured cruising on a skateboard in her baggy denim jeans, weathered Vans, and a long sleeve shirt rolled to her elbows; in her commitment to harm reduction, Bradford’s modesty shadows her qualifications.

“The activism I have engaged in and the underground work I am committed to has changed policies from coast to coast,” she said. “I am a lifelong, career harm reductionist. It is my calling and I am proud to be a part of such a beautiful, loving, respectful, and humane movement. If harm reduction was around back in the early 80’s I wouldn’t have been infected with HCV and my brother David wouldn’t have died from HIV/AIDS.”

To relieve the city streets of unsanitary and dangerous public drug use, organizations like SFDUU advocate for the introduction of supervised injection facilities, a safe indoor environment for drug users to shoot up under the supervision of certified health officials. Yet the city of San Francisco, with a reputation for progressive harm reduction policies, is at odds with becoming the first U.S. city to open a supervised injection facility.

“We have a vigorous disagreement on allowing people to inject heroin and meth to literally destroy their body and their minds in a city-funded shelter,” Mayor Ed Lee told the Board of Supervisors on March 8.

With support from Supervisors John Avalos and David Campos, harm reductionists are pushing the city to move forward as the driving force behind harm reduction in the U.S.

“The city of San Francisco needs to step up their game and allow a sanctioned supervised injection facility to operate as soon as possible – the open-air street drug scene in this city is crying out for this intervention, as are its citizens,” Bradford said. “Anyone who puts up barriers to supervised injection facilities is actively engaged in the death of drug users, actively a part of mothers losing their kids to overdose and other terminal health related issues that cause the deaths of people who use drugs.”

Supervised Injection Facilities are still in question as San Francisco decides whether it will continue pushing harm reduction policies at the forefront of this movement, and drug users are changing the discourse around how drugs are used within the perimeters of their city.

“If everyone talked openly and honestly about drugs, the world would change,” Siever said. “And that is something everyone can do.”