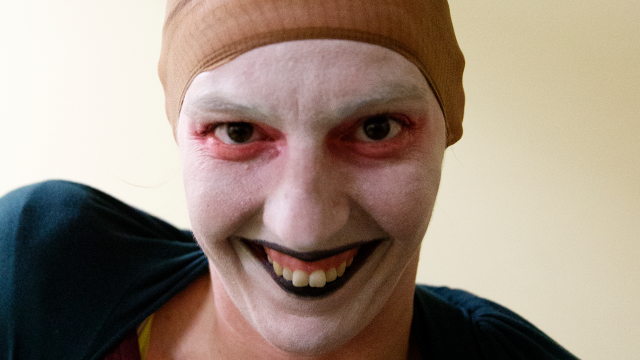 Forty minutes before showtime, the Naked Empire Bouffons were backstage at PianoFight, a bar in the Tenderloin, preparing to grace the audience with their grotesque humor for their monthly show, “Too Soon.”

The six performers coated their faces with bright white makeup, and stuffed their costumes full of foam in places that completely distorted their bodies. For the next forty five minutes, they are not humans. They are the Naked Empire Bouffons.

The audience members settled into their seats, sipping their drinks, their conversations of anticipation echoing through the dark room.  Their night was about to get rocked by the harsh realities these bouffons would smear across the stage. They would be mocked. They may be rudely awakened. Most would leave with a lot to think about and abs sore from laughter.

Naked Empire Bouffon Company’s founder and artistic director, Nathaniel Justiniano, stepped onto the stage, grabbed the microphone, and introduced the show. The Bouffons were backstage, manically giggling, stepping into the essence of their characters.

They danced onto the stage. With rhythm, they sung, “We read these stories on Bart, and now we’re making it art, I think it might be too soon.”

The topics they’d depict over the course of the show would be the Brussels bombing, North Carolina’s House Bill 2, Alex Nieto’s death, gun advocate Jamie Gilt’s four-year-old son shooting her in the back, and the ridiculously real ways people use tech and social media.

The Bouffons think it is necessary that we visit our biases and preconceived notions about these topics, among others. They had spent the previous ten hours researching and developing these topics into what they consider, “Rich dark chocolate laced with razor blades.”

The Naked Empire Bouffon Company was founded to combat — or “fart on,” as its website says — apathy. What’s less apathetic than putting an intense social issue like discrimination against North Carolina’s LGBT community directly in the spotlight to play with, poke at, and deride the ways we, as a society, think about it?

“They celebrate, they’re shameless, and they mock; not individuals, but societal dysfunction,” Justiniano said about The Bouffons. “Tragedy, bullshit, blind spots — they unveil, they unearth, they bring it up, and they don’t judge it.”

The term “bouffon” is a modern French theater term that was re-coined in the early 1960s by Jacques Lecoq in Paris to describe a specific style of performance work that focuses on the art of mockery.

Master bouffon teacher, Giovanni Fusetti described the art form on his website: “The bouffon represents elements of his or her society in an amplified, distorted, exaggerated way, therefore provoking laughter or outrage… Bouffons don’t have opinions, and don’t protect any side from their mocking. Their purpose is to have fun mocking humans and therefore they use everything they find.”

Fusetti taught Justiniano bouffon at Dell’Arte International School of Physical Theatre in Humboldt County. After Justiniano completed his MFA in Ensemble-Based Physical Theatre, he moved to San Francisco to pursue an internship with a group called “SF Buffoons,” now defunct. One year later, he founded The Naked Empire Bouffon Company.

Since its foundation in 2009, the company has created multiple works that tackle issues like homophobia, racial profiling, gun-violence, and much more. Through mockery, candor, and utter hilarity, The Bouffons present commentary on a culture that trivializes serious topics.

That night, during “Too Soon,” the stage became a men’s bathroom in North Carolina. Two performers lined up for their governor to enforce his newly passed bill, House Bill 2, which bans transgender individuals from using public bathrooms that do not correspond to their biological sex.

The crowd laughed and groaned.

“Freeze! Pull out your dick,” Wenske said. “Woah! He’s really packin’! Come on in,” as she slapped the side of performer and artistic director Cara McClendon’s inner thigh.

His next stop was the women’s room at Olive Garden in Raleigh, North Carolina.

“Freeze! I’m doin’ a pat-down,” Wenske says as she feels for performer Michele Owen’s breasts. “There’s nothing there!”

They celebrate society’s unintelligence until it’s completely masked by comedy, then they drag it through fresh mud and serve it to the audience on a gold platter. Bon appetite.

Naked Empire also holds weekend-long intensives, where those interested can come learn and practice the art of bouffon. It is the only company in the United States that is dedicated to the research, expansion, and popularization of this socially responsible practice. They prompt conversations about things that matter, and emphasize the things society is avoiding.

“People have walked out,” McClendon said. To audience members who find her work offensive, she says, “We’re not making this shit up, it’s all based in truth, so when we’re throwing these things at you and you’re getting offended, you may be offended at our format or that we’re not coddling you, but this is true.” She invites the squeamish to evaluate why they are responding in such personal ways.

McClendon spent four years as part of an all women’s circus in Santa Fe, New Mexico. There, she was literally rescued from her dark depression by discovering clown, and got the idea to pursue clown for a living. She attended Dell-Arte in where she was introduced to bouffon, but ended up pursuing clown in the Bay Area. After spending two years injured, in pain, and suffering from post-traumatic stress disorder from being hit by a city bus in Emeryville, McClendon re-entered the performance business and found Naked Empire, where she took Justiniano’s weekend intensive and found her true calling for bouffon.

“I realized I could turn that darkness into laughter and make it a joke,” she said, “My cynicism had a place to go.”

The third member of the company is the program director, Sabrina Wenske. After graduating from University of California, Berkeley, she attended Dell’Arte, where she was introduced to bouffon. She heard about the man in the Bay Area who had a business called The Naked Empire Bouffon Company, from where she too,  took Justiniano’s intensive and discovered her love for the art form.

She quickly became a key asset to the company  by putting together monthly shows and getting butts in seats.

The Naked Empire Bouffon Company sources its performers mostly from trainings. The performers build shows on a consistent basis for the months ahead, but these monthly “Too Soon” shows are built the day of the show. That Saturday, they worked from eleven in the morning to nine thirty at night with less than an hour break in the evening for a nap. They took the stage at ten thirty sharp.

“They were so toasted, so exhausted and I was feeling honestly guilty about putting them through this,” Justiniano said about the performers. Next month, he’s looking to have more bouffons to create more content at a faster rate, and also wants to structure the practice differently so that the performers get started earlier in the day and get a nice long break before the show.

“I’m just so proud of everybody,” Justiniano said. “I feel like [this show] was a smart thing to do for the company … This is my little baby from 2009, this little seed of an idea that I wanted to play with forever. And people are game.”

As long as there is tragedy in the world, there is a need for education around societal dysfunction. The Naked Empire recognizes that it’s easier to come to terms with this dysfunction through humor rather than shame, though many will leave the theatre feeling shameful about racial profiling, and questioning why officers at the San Francisco Police Department shot at Alex Nieto fifty nine times.