From A Bern To A Fizzle 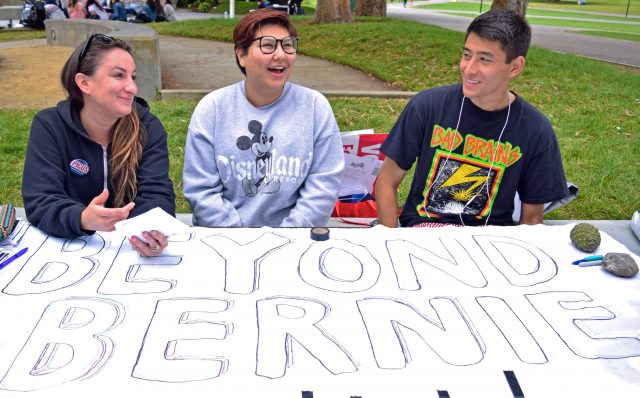 Alyscia Richards was introduced to politics at a young age. Subscriptions to Time and Newsweek magazines lay around the house, the national news blared on the television every night, and political discussions were commonplace at the dinner table. She even remembers the many times she waited in the car as her mother finished up inside the voting booths.

Fast-forward and Richards, political science student at San Francisco State University, emulates her parents as she continues to emphasize politics within her own family. Richards still keeps up with the national news and continues to introduce political conversations at the dinner table. With all that is happening with the current election, there is surely no dull moment in mealtime conversations.

In past elections, Richards explained that she had never before “voted without some degree of reservation.” So when candidate Bernie Sanders came along, Richards was excited to see a politician that she could fully get behind.

“Bernie was a breath of fresh air,” she said. “I remember his announcement and just thinking, ‘Wow, I so hope I get the chance to vote for him.’”

And while Richards did get the opportunity to vote for him in the California primary, she along with many other Sanders advocates, now have to make a choice — either support another candidate, or write his name on the ballot in November anyway.

Not only must his supporters now decide for whom to vote, but they are also wondering if the “Feel the Bern” energy will continue now that “the Bern” is out of the race. For some, this creates a “lesser of two evils” situation between Hillary Clinton and Donald Trump, where supporters must vote for one so that the other does not win. Others are focusing on a third-party candidate, such as Green Party nominee, Jill Stein. Some die-hard Sanders supporters are trying to keep his message alive through local political activism. For Richards, and many other ex-Bernie voters like her, the decision to vote for Clinton is out of necessity.

“At the end of the day it does feel like good vs. evil,” Richards said. “I think that this election cycle has damaged the American psyche, and has opened a Pandora’s box of racism and nationalism.”

Richards classifies herself as a reluctant Clinton supporter.

Robert Smith, a political science professor at SF State who has been teaching for more than forty years, agreed. He explained that when it comes to politics, especially for Democrats, “[The election] always is a lesser-of-two-evils situation.”

In an email, Professor Smith said that this has been the case for years, and that American political culture has traditionally erred on the conservative side.

“As a result both major parties generally have nominated conservative or right of center candidates,” He said, adding a few exceptions in history, including the election of 1896 with candidate William Jennings Bryan, who was strongly for popular democracy and was an enemy of the banks. “This means for persons on the left there [has] hardly ever been a real left candidate.”

Oksana Samokish, a student at SF State finishing up her major in political science, believes this concept is an unfair way of thinking, and that people have the right to not vote for a candidate who doesn’t reflect their viewpoints.

“It’s not really a democracy if you’re voting out of fear of another candidate,” Samokish said. “I think people who want to break up the two-party system have every right to vote for somebody else.”

Weighing the options between candidates, an unimpressed Samokish is considering voting for a third-party candidate.

“It’s tricky right now because Hillary still has a lot to do to earn the Bernie supporters, and I don’t think she’s really made that effort,” she said. “I’m open to letting her show me that, but she still has a lot to do between now and November to earn my trust, I guess. Otherwise, it’ll be Jill Stein.”

Mike Sornsena, another Sanders supporter and friend of Samokish, said he is voting for Jill Stein in the upcoming election because she best represents his political voice. In an email, Sornsena said, “Her focus puts the American people at the center stage,” which includes Stein’s stances on environmental justice, student debt, and military spending.

Then there are those like Corey Smith, a community organizer and Robert F. Kennedy Democratic Club member, who are frustrated with the flaws of the two-party system and think a third-party vote is essentially a wasted vote.

Before this year, Smith was not affiliated with a political party. He registered Democrat so that he could vote for Sanders in the California primary. Smith said that in the 2000 election the claim was made that votes for Ralph Nader took away votes from Al Gore, causing George Bush to win.

However, Professor Smith believes that for California, it does not matter whether Sanders supporters vote third party.

“It is clear that Clinton is going to win California, whereas in the South, in places like Florida, Trump has a very real chance of winning,” he said. “So if one were to vote for Bernie in the South, the vote would go to Trump.”

The difference in votes between Clinton and Trump is incredibly close in Florida. According to data provided by RealClearPolitics, Trump is currently in the lead by 0.1 percent.

Unsatisfied with the candidate options, some supporters have decided instead to focus on local politicians that want similar changes.

Samokish is part of a group at SF State that, until recently, advocated for Sanders in the presidential election. The group, formerly known as Students for Bernie Sanders at SF State, is now called Beyond Bernie. Previously, the group hosted phone-banking events and rallies to support Sanders, and are currently in the process of doing the same for local politicians, one being politician Preston Picus, candidate for United States Representative of California’s 12th District.

However, this transition from supporting strictly Bernie to now being Beyond Bernie took a lot of time and meetings to fully work out what the group’s focus would be.

“I think with this new transition, it’s been kind of hard to find the groundwork that we are all uniting under because Bernie umbrella-ed a lot of causes and different political movements, so it’s been a bit tricky defining [our group],” Samokish said. “We want to back up politicians that are willing to speak up on these issues and who aren’t afraid to run without a super PAC, or corporate wealth.”

While Sanders supporters may differ on who to vote for in November, they do agree on one thing — the energy young people expressed for Sanders and politics should continue.

“I’m a cynic, so I’m probably somebody that is going to be like ‘Yeah, we’re doomed,’” Richards said jokingly. “But honestly, I think there’s a lot of potential if Clinton wins. My daughter has lived all her life with an African-American president. If she gets to see a woman be president — even just that message that sends to little girls, young women — you know, even if they don’t grow up to be president . . . they can engage in politics, [and] feel like that’s a sphere that they can claim.”