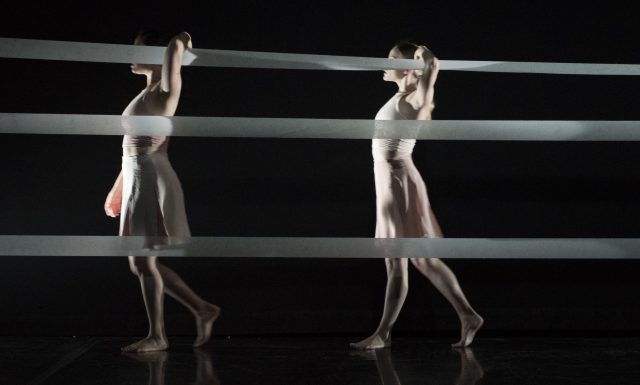 Kaneisee Collective’s dancers walk in to the stage at the begining of the “Readymade” performance rehearsal at Dance Mission Theater in San Francisco on Thursday, Oct. 6, 2016. The show performs at the theater from October 7-9, 2016.

Along the colorfully painted stairwell to Dance Mission Theater in San Francisco, audience members decide whether red or white wine will accompany them to their seats. They exchange dialogue in suspense before settling into metal folding chairs leveled perfectly to see the stage ahead. Across the back of the stage are three rolls of toilet paper stretched from right to left, drifting to the rhythm of the voices.

“Are you sure you want to sit in the front row?” A mother asks her young daughter, whose blonde hair bounces as ecstatically as her nodding head.

Ambient music creeps into the conversations as the dialogue fades. Dance Mission’s theater and adult program director Stella Adelman steps into the spotlight to introduce the night’s show.

For the weekend of October 7–9, the theater was home to a group of ten professional dancers and hundreds of rolls of toilet paper. ka•nei•see | collective, a contemporary dance company located in San Francisco, was about to grace the audience with their movement in Readymade, a show they’d spent eighteen months building.

Readymade is ka•nei•see | collective’s evening-length show, inspired by conceptual artist Marcel Duchamp’s work of the same name. In 1917, Duchamp placed a urinal on its side and called it “Fountain,” a work that would raise questions about whether an ordinary, often overlooked object could be considered art. He did nothing to the object but present it for contemplation — a foundation that ka•nei•see | collective would mirror in using toilet paper to shift the viewer’s perspectives on art and the world around them.

Tanya Chianese, founder of ka•nei•see | collective, is a poised, authentic woman with a contagious smile. Every movement of her’s is a dance, which she acknowledges to be true about each and every movement that humans make.

“Dance is an exploration of movement,” she says. “You roll your shoulders, you sit down, you bob your head in the car.” She relates to familiar movements people make, like scooting to the side of the coffee bar for drinkers reaching for the sugar, or moving in to push the button of an elevator at the same time as another person, then moving around and accommodating. “We squish, we spread — all of it’s dance.”

She speaks fondly of Duchamp and his iconic idea that everyday objects have the potential to be considered art if interpreted through an open-minded lens. Chianese received a bachelor of fine arts in modern dance and bachelor of arts in art history from the University of Oklahoma before her professional dance career sent her through an impressive list of involvements around the United States and parts of China. She was recently commissioned to choreograph for San Francisco State University’s dance program.

Years before the idea of Readymade, Chianese envisioned a dance show using toilet paper for its interesting movements as it unravels.

Her idea became incredibly real when it began to mirror Duchamp’s Readymade. Toilet paper and urinals: two bathroom items with no artistic functions. Could contemporary dancers present a readymade that incorporates movement, sound, and objects, while getting the audience to contemplate the way Duchamp’s audience pondered the framework of art?

As the theater lights dim, the audience quiets to a silence. Two dancers, Rebecca Morris and Madeline Matuska walk out, arms interlacing the three toilet paper rolls at the back of the stage. They dance with it — bending backwards over it, legs reaching through and around it, hands gently caressing it. Their gestures depict that they know the toilet paper well, yet their inquisitiveness shows they know nothing of it. Their interactions with the toilet paper in this moment sets the tone for an evening of captivation.

Throughout the show, the dancers express a curious affection for this normally-overlooked restroom object. They place toilet paper rolls up to their eyes, looking through the holes, to physically create a looking glass, as if to take a close look at the society they are each a part of. Other times, they place their hands up to their eyes like they would binoculars. Their fingers unwrap and spread outward onto their faces, reaching around the curves of their features the way rays of sunshine often do.

From there, their bodies appear to implode. Knees and elbows bend as they near the ground, only to rise up again into a mesmeric dance. Their movements suggest they are thrusted into a whirlwind of commotion and disorientation, ultimately expanding into an opportunity to grow as human beings — a familiar and relatable experience for most individuals.

“The mission of this work,” Chianese says, “is to remind audiences, and ourselves, that if we change our perspective, whether that’s looking at toilet paper in a different light than we normally would, or looking at our lives differently, that we will be left with a greater appreciation of both life and our own experience.”

One scene called “Machine” illustrates an assembly line with all ten dancers, their legs bent out in front of them, feet firmly planted into the ground, passing rolls of toilet paper through the space underneath their knees. They appear to be robots, going through the motions that they’re designed to accomplish, matching the beat of the glitchy music. After each dancer has a roll in their possession, they break down into a dance on the floor with the toilet paper, manipulating their personal roll to move about the floor with every part of their body. Each dancer is exquisitely in sync, yet each reveals an individual, personal relationship with the roll; some expressions demonstrate a playful expertise, while others show an intense effort.

“Machine” transitions as every dancer, besides soloist Mallory Markham, gathers into a cluster near the back of stage right. They watch Markham as she effortlessly balances a toilet paper roll on her head, only to toss it out of the way and begin a stunning solo for both the audience and her fellow dancers watching from the corner.

In a scene called “Half Empty, Half Full,” dancers Oona Wong-Danders and Kelsey Gerber passionately toy with the ideas of positivity and negativity. In one moment during this powerful interval, Wong-Danders is on all fours — her back acts as a seat for Gerber, who’s flexed feet dangle an inch above the ground, swinging back and forth. This fleeting playfulness erupts into the disappearance of Wong-Danders’s support, as Gerber falls to the ground, marking an opportunity for the two to convey the ideas of support and neglect. Some movements suggest they are in love, and some convey they despise each other.

She describes the importance of relating and connecting with those on stage, noting the necessity in finding their collective voice. “It’s less about being an individual and more about being one of the group,” she says. 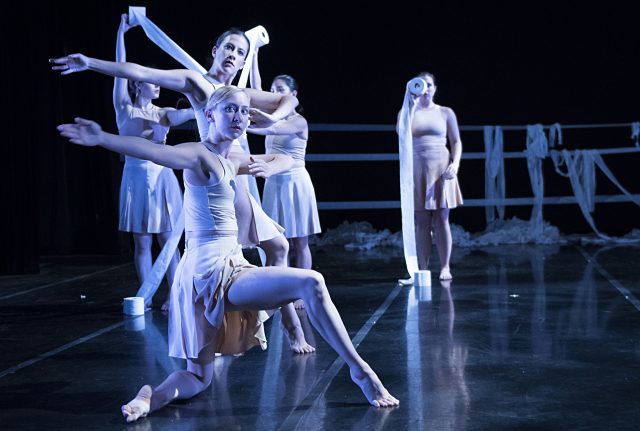 Readymade provides a space where the audience can observe and reflect on themselves and their environment. At times, these reflections were prompted by artists’ voices describing the intention of a readymade.

Over the music comes the voice of David Batchelor, a Scottish artist, writer, and professor who makes present-day readymades, saying, “It’s not you making a work out of nothingness, it’s about responding to something that already exists in the world. And not improving on it, but just working with it somehow.”

A dapperly-dressed audience member, Charles Rodriguez, is at the theater to see his friend Vera Schwegler, a founding member of ka•nei•see | collective. He ponders the show after the audience gives it a standing ovation.

“As for expectations, I had none,” he says. “I knew that a deeper meaning would emerge.”

Perhaps Rodriguez’s confidence in a deeper meaning within this show is a similar feeling amongst the audience. After all, that is what ka•nei•see | collective intended, and reality has not been far off from their intentions with Readymade.

Using toilet paper as way to contemplate our environments raised questions on sustainability and the cultural meaning of toilet paper. In the program handed out at the beginning of the show, a note reads:

We have discussed at length the implications of toilet paper as a disposable item that has become pervasive in our lives. We also have engaged with the notion that not all individuals have access to toilet paper, whether by choice or as a consequence of a personal circumstance.

Additionally, the note describes that they reuse every scrap of toilet paper as long as it’s salvageable. For what is not, they upcycle into note cards and paper, which they sell to support future projects. With the rolls, they’ve made trivets for hot tea kettles. Other pieces, they’ve composted for community gardens and farms, but none have been disposed in a landfill.

After having a couple of days to reflect on Readymade, Wong-Danders feels a sense of sadness. She says, “We might perform it again, we could go on tour, we could find another venue, but it’s never going to be the same show that it just was this past week.” Nostalgia echoes through her tone.

Even if an individual does not understand or favor their work, Chianese says, “Great, thanks for coming, and I hope you’ll come again!” After all, the point of a work like Readymade is to let the audience take from it what they will.

“Everybody is not going to appreciate all art, and that’s okay,” she says. “This artwork has been given to them and they are supposed to take with it whatever experience they receive. Hopefully by them going, ‘Hmm what was that about?’ was actually the point. It was asking them to explore their feelings, explore what they felt, explore how they related to the people on stage.”

If Chianese’s intentions were to braid together her passions for contemporary dance and abstract art into an eruption of connected patterns within themes of imagination, fear, play, control, oblivion, and seeing the world through a positive lens, then she, and the dancers, certainly succeeded.