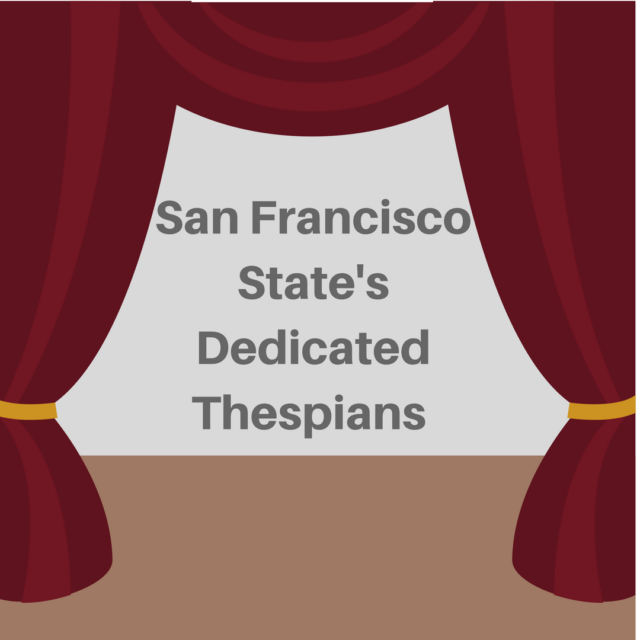 Everyone will always tell you to “do what you love”.

Whether it’s to be a tax attorney or Instagram model, someone will make sure to tell you to get a job that never seems like work. The students of the San Francisco State University Theater and Dance department live by this motto, and exemplify what it means to pursue passion, and wave away the confines of a mundane nine to five.

In the middle of campus sits the creative arts building, a treasure trove of performance spaces and thespians working to to master their craft.

“Our students are really open to constructive criticism, getting better, and checking their egos at the door.” says associate professor Laura Wayth.

Professor Wayth has been tasked with directing the department’s spring production of Hair, the revolutionary, counter-culture musical depicting the turbulent times of the Vietnam, hippie era.

According to department director, Todd Roehrrman, “This department always specifically chooses productions that looks at what’s happening in the world currently and speak to what’s going on socially and politically. Hopefully our productions hold a mirror up  to our audiences and ask them to examine what’s going on in their own world.”

Though the department is eager and excited to premier their production, there is a shadow cast upon this joyous occasion.

During the winter recess, one of the department’s most beloved and skilled professors, Mohammad Kowsar, passed away.

Dr. Kowsar was a seasoned actor and professor, having earned his PhD in acting from Cornell and having taught at San Francisco State for 30 years.

Kowsar was noted for his passionate teaching methods and love for theater and students.

“My office was directly across where he taught the Theater Backgrounds history class,” explained Professor Wayth. “Sometimes I would be sitting at my computer, typing, and ask myself ‘What is going on in there?’ He would be shouting, singing, and standing on his desk, it was really amazing. I would always sit here and think ‘I want to take that class!’”

Even without the presence of Professor Kowsar, the community of the theater and dance department is still lively and still looks forward to what they have in store for the future