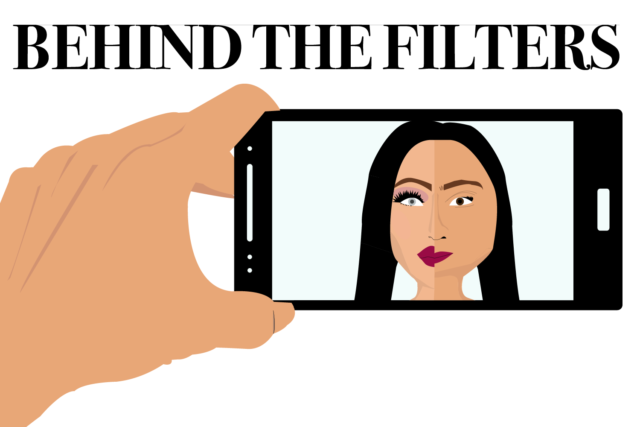 What filter will it be this time around? What is trying to be “corrected” today? Skin texture? Skin tone complexion? Eyes? Nose? Jawline? Face structure? Double chin?

Today, anyone has the power to alter what they look like on social media. Some use apps and filters for fun without thinking twice about why they use or post them. Others, however, overthink how they look and need apps and filters to enhance their appearance because of deep-rooted insecurities. Many of these insecurities stem from the unrealistic Eurocentric beauty standards that are portrayed in the media, but also through apps and filters.

San Francisco State University ethnic studies professor Wei Ming Dariotis, who is also the Associate Professor for Asian American Studies, is not surprised that filters and apps are geared towards Eurocentric beauty standards. In fact, Dariotis is disappointed.

Filters are notorious for lightening people’s skin tones and smoothing the skin. Many filters tend to lighten skin, slim the face, enlarge the eyes, and even create a bridged nose. But are those who claim that filters are pushing Eurocentric beauty standards looking too deep into it?

Dariotis brings up the start of beauty pageants for Japanese-American women. Growing up, she considered herself a feminist and would think of beauty pageants as sexist, oppressive, and overall a waste of time. But with time, she realized that it was a way for ethnic communities to express and showcase their own beauty standards and values. She thinks it’s a beautiful thing to have a group of people embrace their culture, after being told by society that they are not good enough and “ugly.”

The ethnic studies professor does not think Eurocentric beauty standards just stop at filters and apps. She points out that surgeries are also done to live up to these unrealistic standards. From eyelid surgery, to nose jobs, breast implants, the list continues. Dariotis believes it is deeply damaging to not only an individual’s psyche, but also for everyone collectively. In a way, she believes people’s minds are “colonized.”

“Colonial mentality is: you’ve been colonized, and instead of fighting back, you kind of believe what your colonizer believes,” Dariotis explained. “As other ethnic groups in the U.S., there’s a strong tendency to succumb to that mindset, and that allows us to look at ourselves as ugly when we’re really not.”

SF State student Trysha Luu admits she uses filters often. She thinks they are fun and she feels generally positive about them. However, she does see the deep-rooted issues in their features and the impact it can have on the youth.

“I don’t think that filters themselves are racist, but they do strengthen the negative stigma around dark skin and people of color in general,” Luu said. “It simultaneously reinforces a Eurocentric vision of beauty already instilled in adults and teaches this vision to younger generations.”

But what if this idea of “white” beauty standards in photos and media never crossed your mind? This is true for Mimi Sheiner, an SF State design professor. She admits that her being Caucasian is probably why it has never been in her consciousness, and she says that in itself is an issue.

Sheiner edits photos to make meaning clearer. She has never altered anyone’s skin tone, body type, or facial features. She enhances photos and only removes blemishes when they are distracting to the point she is trying to get across. For example, she may remove dust or a crease on an old photo, or add some trees to the background of a photo where the main focus is the person.

But other than that, Sheiner thinks its “creepy” to alter images to the point where they are unnatural. She believes that it damages people’s minds.

“The whole super manipulated beauty thing is damaging,” Sheiner explained while cooking her dinner. “People have terrible self-image because no one can live up to it. Not even those models live up to it. It’s so manipulated. It poses a standard of beauty that makes everyone feel bad about themselves and makes everyone envious. And I think that in a way it’s the theme of our culture.”

Even though Sheiner never really thought of Eurocentric beauty standards being pushed on people through filters and apps, she does believe that people need to look deeper. She thinks users should not think it’s “all fun and games,” because it is not, and altering skin tones is a serious issue.

Skyline College graduate Armani Fuller has noticed how filters lighten the skin, but he never thought about it from a racial aspect. In fact, Fuller thinks it’s a long shot to say that filters and apps are being “racist.” He is confident that it has more to do with people being insecure, which is why they turn to filters and apps to “fix” what they want.

“Filters are like a temporary high to make someone feel good about themselves,” Fuller explained.

He knows that filters can be fun, but if someone is relying on them to feel and look better, the real issue is that they don’t accept themselves for who they are. Fuller stresses that there were “filters” even before the filters. He uses the example of people saying “get my good side” when taking a photo.

Even though our technology is advancing, there has always been a standard and look that people try to achieve.

Of course everyone wants to look their best when they are in control of what images get uploaded. Most people will not upload a photo of themselves where they believe it makes them look unflattering. Social media sites are just a curation of one’s life, and just because someone posts photos of themselves all dolled up and snazzy, doesn’t mean they look like that every day.

Alaysia “Frankie” Brown, a student at SF State, admits that filters give her confidence. She sees nothing wrong with using filters, editing, or adding things to give her photo the look she wants.

“I guess it’s just a way of seeing myself in a different way,” Brown said casually. “I’m okay with it. I like editing photos, putting cool stuff on my photos, so it’s fun for me.”

Brown does not think it is an issue of her being insecure, but does see an issue with the people who have comments about her usage. Brown questions why people are so judgmental towards her when they find out that she looks different in person than what her social media pictures show. To her, “a picture is a picture,” and should not be taken so seriously.

It has gotten to the point where Brown had to disable her comments on Instagram because people would comment about her appearance. She has people leave comments like, “But you don’t look like that in real life,” and the only fix is to restrict the option to comment on her picture all together.

Brown says it’s very common for people to get rejected in real life when they finally meet someone they met online. She explains how a friend of hers recently went out with a guy she met online. When they met in person, the guy told her friend that she did not look the same as she did in her pictures and he did not like the way she really looked. So he left.

Brown is convinced that people who regularly use filters and apps get cyberbullied more. She is disappointed that something that originally came from a positive fun place, turned into something negative.

However, she knows it is easier said than done. It has crossed Brown’s mind on why she uses filters. And she confesses that she has seen it from the race and insecurity point of view, but chooses to embrace filters and apps because they make her feel beautiful.

The “white beauty standard” is part of our history of colonialism. It tells us that white is the default, and what everyone should strive to be. Dariotis suggests that we do not wait for Hollywood to make these more diverse images, and that we make them ourselves. Whether that be making custom filters, or embracing one’s own culture and beauty.

“Filters are not in and of themselves evil or racist,” Dariotis said. “But the way the technology is focused right now, and the people that are making it, they need to be conscious of the fact that it can be used in a way that is harmful.”