Diamond in the Bayview 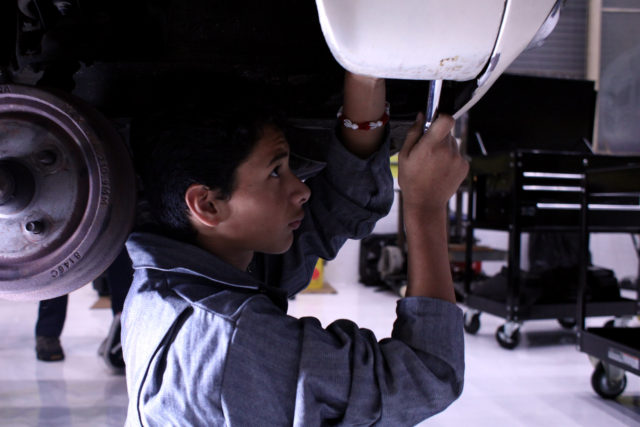 Edwin, 13 works on removing the fender of a car for Project Wreckless, a development program for “at risk” youth in San Francisco, Calif. on March 9, 2018.

An inbound Muni Metro T train whooshes past the cross-section of 3rd Street and Palou Avenue. A brown paper bag containing an empty Steel Reserve beer can sluggishly drags along the sidewalk like an urban tumbleweed. Three older men sit on a layered red brick square, that houses a palm tree almost as tall as the street light on the corner. They seem to be discussing current events.

There is something to be said about the Bayview District. It may be rough around the edges. It may have a bad reputation. But the sense of community is unmatched.

A beige concrete building with red accents is visible behind the palm tree. The vertical sliding metal door at the entrance is halfway open. Inside, it feels somewhat crowded but not claustrophobic, thanks to a high ceiling. The white epoxy floor illuminates a room with three cars. The oldest is a 1972 blue Ford pickup. Bright yellow automated car lifts suspend the Ford pickup and a 1965 white Mustang convertible. Under the pickup lies the hollow shell of a 1967 grey Mustang Fastback. This is Project Wreckless.

Twelve youth participants ranging in age from thirteen to twenty-one have been given the opportunity to repair old muscle cars, like the 1965 white Mustang convertible, at Project Wreckless. The program is designed to mentor and reinforce positive values for those who are considered “at-risk.” An at-risk youth is defined as a juvenile who finds it difficult to successfully transition to adulthood and the Bayview is a district with demand for such a program.

“About four or five years ago, I had this overwhelming sense of wanting to do more in a positive way,” explains Project Wreckless founder, thirty year old Jordan Langer. “And then one day it kinda hit me like a ton of bricks. Cars… Motorcycles… Things that are loud and go fast have always been a driving force of mine.”

He is particularly upbeat, comfortably sunken into a black couch upstairs in the lounge. “We are doing a very abbreviated version of the full-program because we need to learn ourselves,” he admits. The full program will launch in June. For now, Fridays are reserved for test trials. It is a learning process for both volunteers and participants.

One of the participants, Vince, arrives up the stairs towing a bike by his side. “Do you want any chips?” inquires Tori Freeman, the program manager and mediator, in a motherly tone. She assists participants who are in difficult situations and provides as much support as humanly possible.

The same can be said about everyone at Project Wreckless. The program is built upon a strong support system.

“Some of the kids are from foster families, and others are from broken homes,” Tori explains somberly.

A man with salt and pepper hair and stubble on his chin sits on a different couch and pulls out his iPhone 6 Plus. Lud Dawson has been around since the inception of Project Wreckless three years ago. He has been repairing cars for as long as he can remember. He uses his index finger to thumb through the Microsoft OneDrive he has created. He has created a complex, yet user-friendly, business model that can be applied to future non-profit auto body shops like Project Wreckless.

“We want to show what the expenses are like, so they don’t overspend or underspend,” explains Lud with controlled excitement. He even has vehicle sub-categories depending on the continent. And as he begins to dig even deeper, he displays a step-by-step tutorial for a 2009 Jeep Wrangler manual transmission. That is his expertise.

“The only thing missing is the curriculum. That isn’t my department,” he adds with a chuckle.

Joe Toomey has been part of Project Wreckless for almost a year. He has a Master of Arts focused in Counseling Psychology from the University of San Francisco. He was also born and raised in the City.

“I’ve always worked with kids, and I’ve always had a passion for helping other people. Therapy is kinda awkward. It can be really stale sometimes, and a lot of kids don’t like it or get it. There is a lot of stigma around therapy. Culturally, there is the idea that if you need therapy there is something wrong with you. I see [Project Wreckless] as a therapeutic tool. When I’m here I’m not acting as a therapist, per se. I’m acting as more of a mentor and a coach,” shared Joe.

His therapeutic skills are applicable to the Project Wreckless setting. It is a more hands-on approach that resonates with participants enrolled in the program. The cars are used as a platform to bond and connect. “Sometimes just working on the car itself can be therapeutic. I wanted to figure out how can I do therapy and work on cars with kids.”

The goal is to become a safe space within the community and for participants to eventually transition to mentors. Bayview residents have expressed gratitude for a program like Project Wreckless. The reception has been tremendously positive.

“We have a lot of kids right now that are either currently or have been in the criminal justice system,” Joe adds halfheartedly. “All of our kids are at-risk of substance abuse and getting involved in the criminal justice system. The kids that are still in school are at-risk of dropping out – not necessarily because they’re not capable, but because of the external factors that are getting in the way of them going to school every day.”

Helping a parent complete a job is an external factor. Mental health issues coupled with a lack of health insurance is another. Many qualify for Medi-Cal, but parents and legal guardians may be unaware. Others become involved in gangs and criminal activity.

The rest of the participants trickle in. There are five today. Every Friday at 4 p.m. their time at Project Wreckless begins with reflection. They head up another flight of stairs into a room about the size of a large walk-in closet. This is the War Room, as Jordan symbolically named it. Before class begins, it is encouraged to share thoughts, feelings, doubts, and everything in-between. A faint scent of fresh paint lingers in the room. Which stands to reason, given that the walls are literally wet with fresh white paint. The room is narrow, but perhaps that is the point. Everyone in the room is in close proximity, creating the sense of a safe and intimate environment. The table appears to be comprised of two retrofitted brown doors with chicken-wire glass in each of the centers. They are being held together by blue duct tape.

Everyone goes around the room to discuss a variety of topics, many of which come from a vulnerable place. Many are too personal to repeat. It is reflection without judgment. Trust is paramount. This is a family.

Vince mentions that his phone is broken. He can make calls, but texting is impossible due to a shattered screen. Jordan addresses the issue and asks to speak with him after to further remedy the problem. He’s made it clear he’s available long after the shop closes. The positive influence of Project Wreckless extends far beyond the confines of the building.

Everyone slowly makes their way to the ground floor to begin instruction. Participants and volunteers alike are decked-out in grey Dickies mechanic coveralls. The back reads “Project Wreckless.” The word “Wreckless” is in a much larger font, stylized with a wrench in the “k.”

Edwin, thirteen, grabs a wrench from the tool bench and shuffles toward the white convertible Mustang. He’s clenching a salmon-colored rag in his left hand. He also happens to be the youngest in the program.

He is accompanied by his friend and teammate Christian, who is fourteen. Thick black grease begins to form at Edwin’s fingertips as he turns the wrench near the rear left wheel.

“My passion for working on cars and finding out more about them. And being able to fix them… just having a hands-on experience,” Edwin expresses, explaining his interest in joining Project Wreckless.

He transitions to the front of the car and slides under. He’s removing the front bumper. His black Air Force Ones squeak against the white epoxy floor as he rearranges himself. He seems unsure about something. Trent, one of the volunteers, is there to provide valuable information about the next step.

Across the room, Lud is giving Vince, Joseph, and Sheldon a transmission lesson. They are working with a Ford C4 automatic. They are in the disassembling stages. Vince appears to have broken a segment of the transmission. It’s their first time doing this.

A light draft blows through a window reinforced by a metal barrier. Fragments of cracked concrete line the window shelf.

“[Project Wreckless] has definitely helped me stay out of trouble because we can’t be on anything. They’re not kicking us out, we’re the ones kicking ourselves out. We’re the ones making the choices, not them,” Edwin asserts as he reflects on the program. “I had a smoking habit, bad grades, and I had bad anger control. That’s what I’m working on… anger management.”

The day ends with dinner around 6 p.m. It includes pasta in a tomato sauce, meatballs, bread and a salad.

When the full-program launches in June, Jordan expects the shop to be open on a car-to-car basis. Time spent will largely be dependent on the car’s level of difficulty. Sessions will also rotate every seven months, with a new group overlapping into the last month of instruction.

“Most of the cars are from Craig’s List, some of them are donated, but the white one is a personal one of my cars,” Jordan explains.

All cars will be auctioned upon completion with one-hundred percent of the proceeds funneling back into the program.

“That’s what kinda sets Project Wreckless apart from a lot of other non-profits and NGO organizations,” expresses Jordan. “They don’t have avenues to generate revenue. They just count on fundraising dinners and individual donors and grants and all that kind of stuff. And Project Wreckless has the ability to actually sell a good, which is the car the youth work on for seven months, and the proceeds from that car go right back into the program. I think this is the first of its kind anywhere. You can write that down.”