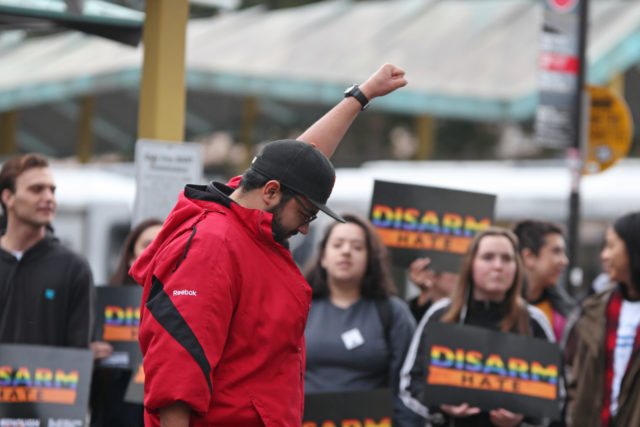 Cinema major Alfredo Lopez holds his fist in protest as part of the national walkout at SF State on Wednesday, March 14, in memory of the 17 victims from the Parkland high school shooting last month. (Christian Urrutia/Xpress)

On March 14, thousands of students participated in a national school walk out to demonstrate their support for the Marjory Stoneman Douglas students after a shooting occurred at their high school in February, in Parkland, Florida. The survivors of the Marjory Stoneman Douglas shooting have demanded change in gun regulations and have inspired youth around the country, including those at our very own San Francisco State University.

SF State students, faculty, and community members gathered early Wednesday morning near the Cesar Chavez building located in the middle of SF State’s campus as SF State student Ibraheem Chaudry, one of the events organizers, handed out “disarm hate” posters to all the students participating. While the group made their way to the top of campus, they chanted ‘enough is enough’ as cars honked to show their support.

“Our professor is a huge advocate for change and he encouraged us to come. We’re all here, we’re literally in the middle of class right now.”

“All of this will definitely affect my upcoming years,” said Rafferty.

Mark Allen Davis, an original cast member of the award winning Broadway production The Lion King, an SF State Liberal and Creative professor, and Rafferty’s Jazz II professor, attended the walk out with his students. Davis wanted to show his support of the movement.

“When the Parkland shooting happened, my acting class had a long conversation about how we feel the world is now, how our culture has changed since 9/11, and how violence and guns and people having no other resolution than killing and arbitrarily murdering people, has made everyone else afraid,” Davis said passionately, while walking side by side with his students.

“They actually told me that they scope out spaces when they enter into them, just naturally. Subconsciously they walk into a space and look around and go, ‘okay, this seems safe.’ I just think that’s not a world that people need to live in.”

Since the Columbine school shooting that took place in 1999, school’s around the country have implemented lockdown drills in case a shooting occurs on campus. Young kids are growing up in a time when these lockdown drills are as normal and routine as fire drills. Students are taught to barricade the doors with desks, cover the windows, and hide in closets (I know this because I myself, started practicing these drills in the first grade; I am now twenty-two). It’s also becoming more normal to walk through metal detectors before attending large events.

Once the group of SF State protestors made it to the top of campus, Chaudry, along with other student organizers, asked for a moment of silence for those who have been killed by gun violence. The crowd of students and faculty went completely silent. During the moment of silence a student laid in the middle of the crowd, showing what it would look like to be gunned down.

On the day of the walkout, the National Rifle Association (NRA), tweeted a picture of an AR-15 with the words “I’ll control my own guns, thank you” captioning the photo. The NRA received backlash from thousands after the tweet was sent out.

Both Chaudry and Davis were asked to comment on what they would say to the NRA if the opportunity presented itself.

“I grew up around lawyers. My father was a State Supreme Justice of New York state so I get the law and amendment. But why should kids, young kids grow up feeling unsafe? Even if their parents own guns, I don’t see anything wrong with that. But let’s treat it like the serious weapon it is. Who needs assault weapons?!”

“Those weapons, that weapon, they’re made to kill,” answered Davis with a straight face.

Chaudry, a student who is very dedicated to this movement, had a lot to say to the NRA. He simply could not say everything he would like, in a short interview.

“They claim to be very nationalist people,” Chaudry continues. “These are your very own people getting killed by guns. The numbers are there. You can’t deny them, they’re real. You can cover it up, you can talk about a bunch of bullshit but the numbers are there. I just don’t get the NRA. They’re claims are irrational.”

The fight for gun regulations did not end at SF State. Later that week, on March 24, thousands of people, including Chaudry, attended the March for Our Lives that took place at Civic Center in downtown San Francisco. Chaudry, along with other students around the Bay Area, spoke in front of thousands at the rally.

Mark Allen Davis sums up the walk out events, marches, and rallies taking place around the country the best.