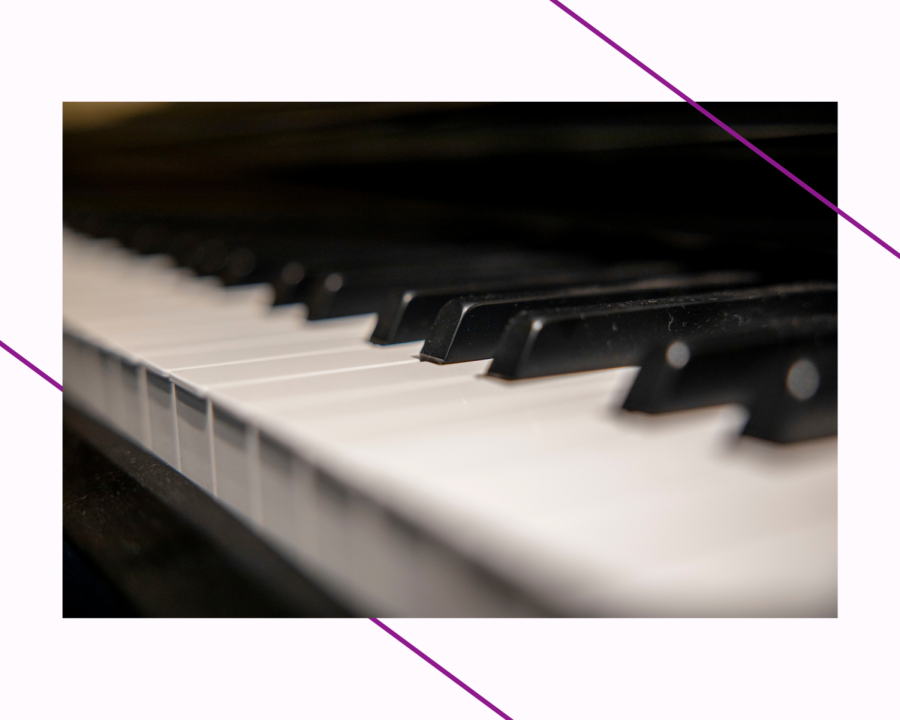 McAllister Music Studio in San Francisco has welcomed over 65 students to virtual lessons in the past year. While some of these students are seasoned musicians seeking more technical training, others are brand new to music.

According to an article published by History, playing and creating music have been a universal aspect to virtually all human societies.

Some of these societies left it up to prodigies or musically inclined, but despite what some may think, it’s never too late to learn how. The folks who agree are using the extra time the past year has provided to learn a new instrument, and for many students at McAllister, that instrument has been piano.

Bay Area local Chris Marty, 32, recently began lessons. As a seasoned singer who participated in musical groups his entire life, Marty always craved more technical music theory knowledge. From church choir as a child to acapella in college to a semi-professional group as an adult.

“I was never able to accompany myself or get sheet music and make sense of it,” Marty says. “Which always, sort of, left me at a disadvantage. I was able to get by on being able to listen, and kind of just my natural vocal ability, but I always had wished that I had more tools in my tool belt.”

Ashtyn Avella has a different story. Avella is an elementary school music teacher with a master’s in clarinet performance. They played piano as a child but never took formal lessons.

As a music teacher, they realized the increasing importance of understanding at least the very basics of piano playing.

With so many other things on their plate, especially since it’s been years since they have focused so much time and energy on a single instrument, Avella found it difficult to commit on their own.

“I haven’t done it since I graduated with my master’s degree,” Avella says. “I was kinda like, you know, it’s time. Let’s go for it. Let’s do it.”

“Now I’m getting what I need,” Avella says. “I actually can sit down and practice, and it’s coming back to me – the things that I used to be able to do, and I was like, ‘this is really exciting.'”

As adults with backgrounds in music, it took many years for both Marty and Avella to look into lessons.

For Marty, it was a mixture of fear and time that kept him from taking the leap. An important piece of his story is that Chris doesn’t have any fingers on his left hand.

“It was always a daunting task to not just learn the music, but then think, even if I knew how to play, how would I actually do it?” Marty says.

It was always a daunting task to not just learn the music, but then think, even if I knew how to play, how would I actually do it?”

Marty wanted to make sure that the time and money required for him to learn piano would be worthwhile.

“I just finally realized, gosh, what’s the harm in trying,” he says. “We’re in a pandemic, I love to sing, I’ve got the space. Maybe I can start to learn with one hand and kind of do some things supplementally on the left hand.”

He feared that one day he’d wake up and realize his physical situation was inhibiting him from pursuing something he wanted to do.

For Avella, it was more about longing to rekindle the passion they once had for the instrument, and finally having the extra time to do it. Along with teaching, Avella is also a member of the San Francisco Gay Men’s Chorus.

“My week and days were just music, music, music. And then, once (the pandemic) hit, everything stopped. There was no music,” they say.

Avella describes the sudden shift from being perpetually surrounded by music to virtually none at all as “jarring.”

They thought to themself, “I need more music again, and I need to do something new and fulfilling.”

Piano lessons happened to be that something that would benefit Avella both personally and professionally.

Both siblings have dabbled in music through San Francisco Unified School District’s music program and learned the basics of instruments like the recorder, flute and violin. It wasn’t until their schedules opened up so widely that they felt they finally had the time to commit to lessons.

Music as an escape

In the face of a pandemic, searching for a distraction from anxiety and sadness has become essential. For so many, playing music is the perfect means of escape.

For Ciara McAllister, owner and founder of McAllister Music Studio, this is certainly the case.

In those grim moments, “(piano) was the only thing that would keep me calm and keep my mind working and keep me engaged in something, and it was a lifesaver for me,” she says.

McAllister struggled with anxiety “pretty intensely” this past year, and in moments where she felt herself on the brink of a panic attack, music had become her only solace.

Yoga and meditation weren’t cutting it for her anymore. As a lifelong musician, music became more therapeutic in a novel way.

“It required my brain to be really engaged, it required my heart and my emotion, and it required dexterity and physicality. And so when I was starting to feel a panic attack coming on, I would go to the piano and pull out like, Chopin,” she says. “I found it to be a source of comfort in a way that it had never been before.”

Music is inherently related to emotion. It’s used in movies and television to indicate to audiences the emotions they are meant to feel. It’s used in clinical therapy to address the specific emotional needs of patients. The simple act of listening to it is known to release neurotransmitters like dopamine.

“I think that’s why art is so impactful,” Avella says, “Because it makes you feel something that you might not get elsewhere.”

I think that’s why art is so impactful. Because it makes you feel something that you might not get elsewhere.”

Marty says that he utilizes music as a way to redirect this heightened energy.

It’s not just this way for adults, either. According to Oscar and Simone, playing music benefits them too.

“Depending on what mood you’re in, sometimes it helps you get back into a calmer mood,” Simone says. “Yeah, it can get it out,” Oscar echoes. “Sometimes, when I just feel something, I feel like I want to play.”

Playing an instrument is a vehicle for folks of all ages to take them away from the dreariness of today, even if only temporarily.

“You can go there to distract your brain from other things, or to let it have a channel to wander into places,” McAllister says. “It’s that active imagination (that) really comes alive when you’re just engaging with music.”

The best advice these students can offer to others on similar musical journeys is to take their time and celebrate what Marty calls “little wins.”

“I think the challenge with that in myself is that if I don’t get to where I want to be fast enough, it can be disheartening,” Marty says.

Setting achievable daily or weekly goals is what has helped him stay motivated.

“What are the little wins that are going to give me the motivation I need daily?” he asks himself.

It’s far too easy to begin a new hobby or project and feel discouraged when one does not immediately excel. However, with the right balance of patience, discipline, and genuine desire, progress is inevitable.

“To anyone out there who is thinking about piano,” Oscar advises. “If you’re not interested, give it another week or month or something, because you won’t get sucked in on the first lesson.”

Parents Deanne and Brian agreed with Oscar and Simone that they would both give the piano a fair three weeks before making any decisions to halt lessons. Now, about eight months later, they both continue their dedication to the instrument.

“Oscar told his teacher where he’s just like, it doesn’t feel like a chore to play,” mom Deanne says.

Some days, Oscar gets up in the morning and chooses to spend time at the keyboard before brushing his teeth.

“I don’t think we could have been happier with how this is going, to see (that) they are motivated to play on their own,” Deanne says.

Of course, to improve, it takes some accountability.

“It’s tough to sit down and say, ‘Oh, I have to now spend this time practicing these passages, which are so tough and frustrating,'” Avella says.

It’s fun to replay songs they know and enjoy, but that doesn’t yield the results they want. Ashtyn advises other beginners to “sit down and practice these challenging parts, or else you’re never going to get better.”

It’s also crucial for new players to remind themselves of why they are learning in the first place. While it’s true that playing any instrument is a technical task, there is also a fun and creative piece to it.

“My goal is not to play Rachmaninoff,” Marty says.”The goal is to fall in love with the song, know that I can provide the vocals, and then be able to do it all on my own.”

McAllister stresses the importance of understanding that the relationship one has with music is easily a two-way street.

“This is the time where we should be letting music give back to us and drawing from it, rather than putting all this pressure on ourselves to create, create, create,” she says.

A person can give to music, but music can also give back.

The best time to start is now

Even if not a professional pursuit, playing music is an experience unparalleled.

“I think anybody who feels even the slightest bit drawn to it should explore it,” McAllister says. “If there’s any amount of curiosity, do it because it’s such a wonderful way to enhance our lives.”

“I think if you want to do it, just jump right into it,” they say. “Because there’s no better time to start learning an instrument or improving your instrument or your voice or something like that, than this current moment.” 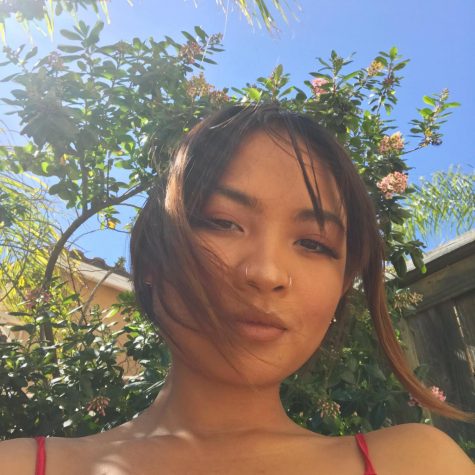 KK Interchuck (she/they) is a creative based out of San Francisco, California where she lives happily with her trusty sidekick Psilo (who may or may not... 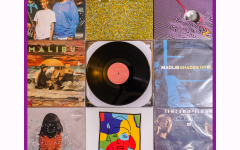 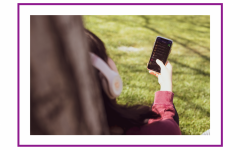 Headphones in, healing mode on 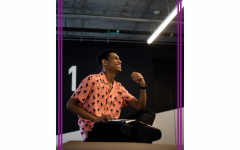 A star on the rise in Inglewood 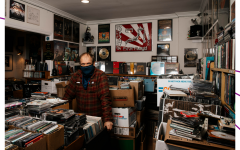