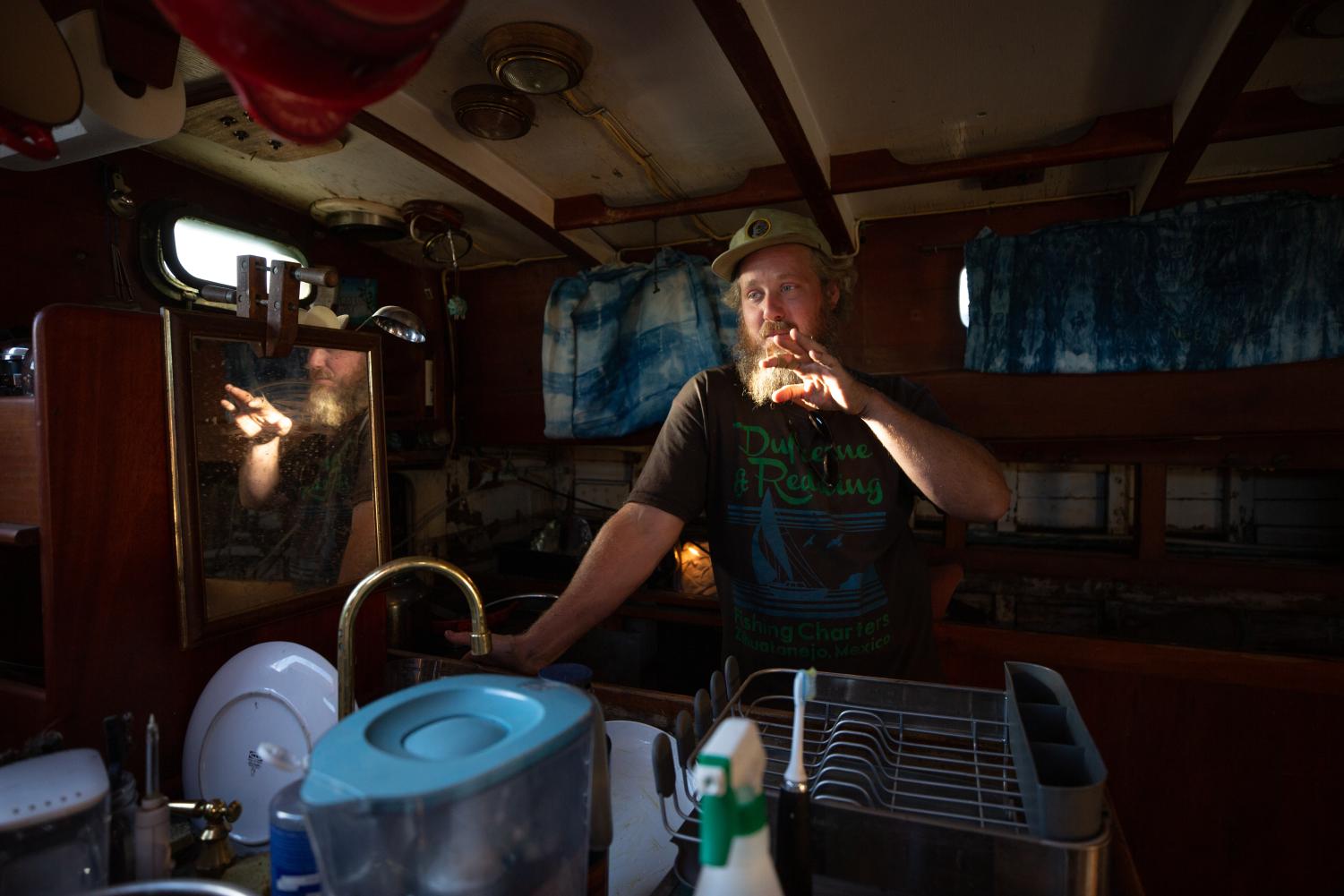 Life Onboard: the Bay Area Intrepid Who Choose Life on the Water

On a Wednesday afternoon, John Fredericks briefly rummages through a cluttered countertop to find a clean mug. His current home, a 1973 wooden sailboat named Horizons, has lately become more like a workshop. A jumble of cables take up what would otherwise be the dining table, tools line the upper deck and panels of the teak wood interior of a 40-foot sailboat are piled up in a corner.

Fredericks has been between boats for a while, and he’s the first to admit that living on a boat can get messy sometimes. Across the dock is his 32-foot 1962 Chesapeake, a small sailboat that he’s all but stripped down to the bones. He is in the midst of renovating the vessel in the hopes of one day sailing away for good.

“I want to go to more far-flung places that you can only get to by boat, that are far from Western modern society. That’s kind of the whole point for me, get away from the crazy, busy, modern life,” Fredericks said.

Such is often the dream of those who choose to live on the water, but making that dream happen can be an arduous and expensive process.

At Fifth Avenue Marina in Oakland, where he’s been living for over a decade, Fredericks is the resident boat diver. He gets paid by the marina to dive and clean boats and to haul the occasional sunken boat out of the water. For years, he’s been working towards a goal of eventually becoming a full-time cruiser — the term used to describe boat dwellers who travel long distances.

Between weekends spent sailing and anchoring across the Bay and along the coast with friends, Fredericks spends time either working odd jobs or trying to get the boat into sailing shape. For several years he rode a bike taxi at Fisherman’s Wharf. Now between jobs, he helps take care of a 93-year-old man who lives a few docks over.

“I like to do everything myself. I don’t like having to pay other people to do things,” said Fredericks.

He first arrived at the marina in 2010 after having completed a cross-country bicycle tour from Maine to Los Angeles. Just like his three-month journey across the country, Fredericks enjoys the slow pace of boat life.

At the end of the wooden dock, life is more peaceful than busy city life. Glassy waters give way to stunning sunsets, and warm cozy string lights illuminate the wooden interiors of old sailboats as they slowly sway and creak with the elements. Fredericks will often take his dog Selkie, a black German shepherd, on a small motorboat to a deserted beach that can only be accessed via the water.

While boats are usually associated with luxury, in a pricey housing market like the Bay Area’s, living aboard can actually be more affordable than living in an apartment. Depending on marina fees and boat tax brackets, some might even call it cheap.

“We’re in the Bay Area but we’re not paying Bay Area pricing,” said Sonya David, 28, who has been living on a boat with her partner, Jack Patton, for about seven years.

Across the Bay, at Safe Harbor Marina in Emeryville, a small white cat darts across the dock and hops onto the deck of a shiny 42-foot sailboat. She was adopted about a year ago by David and Patton, who named her Fathom after the unit of length used to measure water depth.

Ever since David and Patton first met, their whole lives have revolved around boats.

David fell in love with sailing as a teenager. In college, she was working part time cleaning boats when she met Patton, a trained BMW mechanic who had just bought his first sailboat and was slowly growing tired of his nine-to-five job. Within months they were living together on Patton’s boat in Emeryville. Later, they sold it to buy their dream sailboat, a 1986 Passport 42 with a hand-carved teak interior.

“We choose this lifestyle because of what it gives us. We don’t want to feel stuck in a box,” David said.

Over the years, the couple has been hard at work saving up to become permanent cruisers. Together they run Spirit Marine Services, a boat service business through which they offer various boat repairs, maintenance and cleanings, and which they hope to continue remotely. They also run their YouTube channel and blog “Two The Horizon Sailing” and have captain’s licenses, which allow them to make money on long-distance boat delivery jobs. If all goes to plan, next November they’ll sail down to Mexico to start their global circumnavigation.

“A lot of people think it’s super affordable or it’s super easy, and it could be if you’re just trying to keep it afloat or if you don’t ever want to take it anywhere,” David said.

Maintaining a seaworthy boat, however, is a whole other story. On a recent long trip down to the Channel Islands in Southern California, the couple spent several days off-grid, relying on their solar panels, water-maker and provisions. But with more self-sufficiency often comes more problems to fix.

“I don’t even want to add up what we’ve spent on boat parts in the past four years because it’s well over 100 grand,” Patton said.

The ocean’s humid and salty environment takes a toll on anything that’s exposed to it for too long. Stainless steel needs to be polished, wooden decks need to be varnished and hulls should be scraped.  Maintaining the regular trappings of a home, such as plumbing and electricity, while also dealing with an engine, the sailing equipment and the hull that keeps the whole thing afloat, means that the to-do list can easily get overwhelming.

Greg Johnson, 53, isn’t a fan of boat chores. He bought a 35-foot 2008 Hanse sailboat hoping that it would be lower-maintenance than his first boat. What he didn’t expect was to find an instant community at the marina where his boat was docked at Emery Cove in Emeryville.

He quickly abandoned his corporate accounting job, rented out his San Francisco apartment and moved onto the boat permanently. Before he knew it, he was babysitting kids for the neighbors, doing the occasional accounting gigs and working as first mate on an 80-foot privately owned boat docked nearby.

“I think in a lot of modern living, you might say hi to your neighbor at the mailbox, but you don’t know them generally. Not like at a marina,” Johnson said.

Unlike Patton and David, Johnson has no interest in full-time cruising. He’s content with day and weekend sailing trips. The cabin of his boat is simple and uncluttered, save for a few gifts from friends: some children’s artwork, a handwritten note and a little piece of wood carved with the name of his boat, “Gretel.”

Yet, not even he seems to escape the inevitable problems of boat life. Just recently, he lost electricity onboard after trying to plug in a portable heater and has yet to find the cause. Even so, what he loses in practicality, he gains in simplicity.

“For me, living on a 35-foot boat is simple. I don’t have much stuff, I don’t want much stuff,” Johnson said.

Living in a marina also comes with rules. Most boats have toilets that pump directly out into the water, but in marinas, there are usually strict rules about wastewater. In the Bay Area, live-aboard tenants either have to use the marina bathroom or have their holding tank pumped out at a pumping station. Greywater runoff, which comes from the sink and the shower, can be pumped directly into the Bay if biodegradable soaps are used. Marinas often have laundry facilities, but when they don’t, doing the laundry can mean a lot of handwashing or a trip to the nearest laundromat.

“We don’t regret living this lifestyle. But yeah, you have to work a little harder for some really simple things,” David said. “It’s not really a less convenient lifestyle, it’s just more involved.”

Bud Brown used to live on the water. He was an antique dealer in Berkeley and first moved to the Fifth Avenue Marina after he traded some antiques for a boat. Eventually, he was offered the harbormaster job and has lived in a shingled white house on the edge of the water for the last 15 years.

“It’s a harsh life. It’s like living in a car, only a little bigger,” Brown said. “And certainly, it depends on the Marina. There are plush Marinas, but still, there are a lot of trade-offs.”

As harbormaster, Brown oversees marina operations, manages live-aboard permits and has authority over who is allowed to dock. Brown said that since his marina is small, he’s able to be selective about who he allows to dock, but that in the Bay Area, problems have arisen recently over those who anchor outside of marinas in undesignated areas.

In California, only 10% of the boats in a marina can have live-aboard status, which means that the boat is the person’s primary residence. The regulations, coupled with a housing crisis, can also attract “sneak-aboards,” people who live on their boats in marinas without official live-aboard status. Bay Area marinas face particularly high demand, and most have a multi-year waiting list to get the coveted “slip.”

Last year, David and Patton gave up their live-aboard status at Emery Cove Marina and moved to the next-door marina in preparation to become full-time cruisers. Now, a few days of the week they have to either sleep off the boat or spend the night in nearby anchorages and rely on their engine and solar panels. Giving up their slip was a difficult decision, but one of many that has brought them one step closer to untying the dock lines for good.