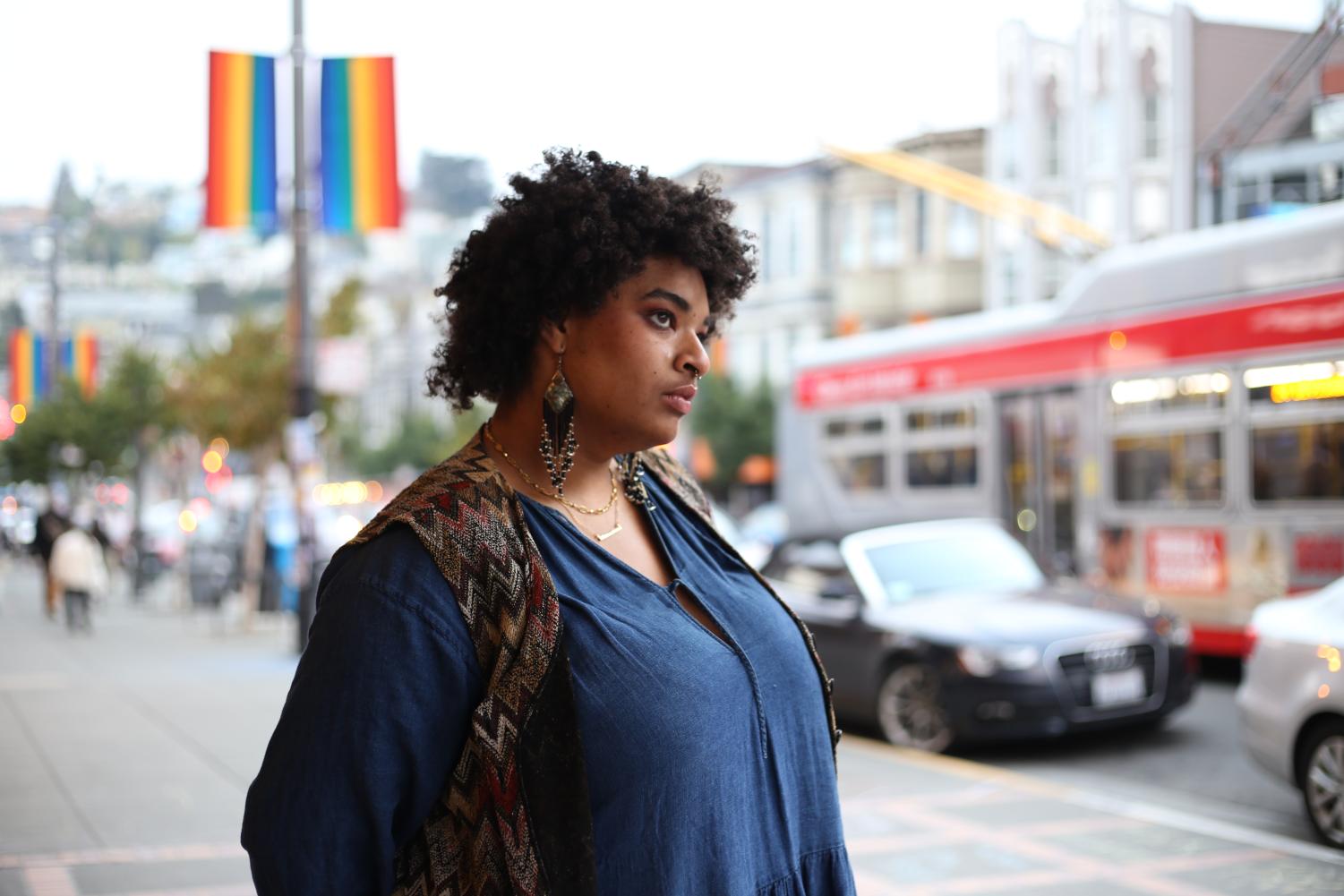 Ziggy Deberry, 20, poses for a photo in the historic Castro neighborhood of San Francisco on Dec. 3, 2021. “There needs to be space — there has to be space — for the people who are now struggling,” they say. (Kenzie Aellig / Xpress Magazine)

Ziggy Deberry, 20, poses for a photo in the historic Castro neighborhood of San Francisco on Dec. 3, 2021. “There needs to be space — there has to be space — for the people who are now struggling,” they say. (Kenzie Aellig / Xpress Magazine)

Its colorful flags give a cheerful welcome to visitors from all around the world, while its historic bars and shops give comfort to the residents who have been there since the beginning. The Castro, one of San Francisco’s most notorious neighborhoods, has been an iconic staple of the city since the 1960s.

The neighborhood has evolved its outward appearance to keep up with the ever-changing times, but some feel excluded from the neighborhood’s demographic.

Despite its history as a revolutionary space for LGBT individuals, a new generation of queer people have begun to question if the Castro is meant for them, too.

“Back then, being gay was such a revolution within itself, that being proud was an act of liberation,” Deberry says, addressing the history of the iconic neighborhood.

Deberry, who is Black and genderfluid, expresses incredible love for the city but feels it’s necessary to acknowledge San Francisco’s shortcomings, especially within queer spaces.

“I love San Francisco, but I am not a native here,” Deberry states. “I understand that this isn’t necessarily my lived-in, built-in, lifelong experience.”

They describe growing up hearing stories of the famed Castro neighborhood, only to feel disappointed after their first experience there.

Deberry stresses the importance of intersectionality within queer spaces and questions the limitations of the communities they identify with. They explain that it’s common for communities to separate the various aspects of one’s identity rather than acknowledge that it’s impossible to do so. Deberry feels that almost all revolutionary movements and organizations, including the Black Panthers, gay rights movement and the Women’s March, have a history of excluding identities and leaving out the needed conversation about intersectionality.

“It’s like, how dare you?” Deberry says. “How dare you tell Black trans women that they are supposed to separate their transness from their Blackness? It’s impossible. You can’t do that.”

Deberry feels it’s important to address the fact that white, gay men have long been the face of the LGBTQ community, listing public figures such as actor Chris Colfer, YouTuber Tyler Oakley and singers Elton John and George Michael.

These people, according to Deberry, are members of the community who have long been forgotten or overlooked.

To start, Deberry would like to see fewer gay bars and more youth centers in places like the Castro.

“Right now, the Castro is just the ‘G,’” Deberry states, referencing the acronym LGBTQ. “That’s it — the white G. There isn’t even a place for the white L’s, the B’s and T’s.”

Deberry would also like to simply ignite conversation. They believe it’s important for communities to learn and grow, as well as adapt with the ever-changing landscape of social issues.

“I think it’s really important to tell the people within the community you can play the role of the oppressor worse than the actual oppressor can because you’re supposed to be on my team,” Deberry says.

Cyrus Quan, a self-described “born and raised” San Franciscan, reminisces on his childhood growing up as a “minor with a fake ID,” using the Castro as a guiding tool for his gender identity. Quan, 23, who lived in the Russian Hill neighborhood of San Francisco until he began attending school in Santa Cruz this past September, describes his relationship with the Castro as “very complicated.”

He describes the neighborhood as a very open place that has become a haven for specifically white, cisgender, upper-class, liberal queer men.

Quan recalls fond memories of the Castro — his “earliest memories” — as a child, attending “Drag Queen Story Time,” where drag queens read to children in libraries and schools, calling it “such an important piece of me.”

“I never had a coming out because it wasn’t necessary. It was understood that I was not a straight adolescent,” Cyrus says. He acknowledges a large amount of trauma in the queer narrative surrounding the concept of coming out, adding that the experience is never linear and is constantly evolving. Quan, like many others, questions why straight people don’t have to come out and believes gay people don’t have to either.

“It just takes places like the Castro and that history to do so,” he says.

However, Quan feels it’s crucial to acknowledge that he believes this positive coming out experience was, in part, due to a place of established privilege as a cisgender, white-passing male.

Although it can be “tempting” to view the Castro as a “boy’s club of cis homosexuality,” Quan adds that a more overarching problem in the city is the issue of gentrification, which also affects the Castro. Quan believes gentrification in the Castro has appeared in the form of “white, tech, gay men coming in and creating this identity of the Castro.”

Quan also expresses frustrations with “transphobic sentiments” in the Castro as well as the “weird fatphobia and body expectations” that made Quan feel “so strange” in his youth. He adds that these expectations “informed not only my discovery of my gender identity but also my discovery of gender dysphoria.”

He believes this environment can breed toxicity and patriarchal values in men. However, it can also create a space of acceptance and belonging.

“There’s also a lot of love that people feel towards one another because they see themselves in the person they love, through their (shared) gender identity,” Quan says of gay relationships. “There’s a certain amount of trust that is immediately built into two men seeing each other in the Castro, simply by being two gay men seeing each other in the Castro. It’s just a small, very intimate thing that I really would have only come to understand by growing up where I did.”

He commends the historic neighborhood for its long-lasting impact on society.

“The events that they still put on and the charities are known throughout the world,” Quan says. “There are such incredible queer symbols that came out of the Castro, and those things still exist.”

Quan credits the Castro neighborhood for laying down the groundwork for the possibility of places where people of all gender identities, class and racial backgrounds would be able to coexist.

“History repeats itself, and we can just hope that it gets a little better on the second try,” Quan says.