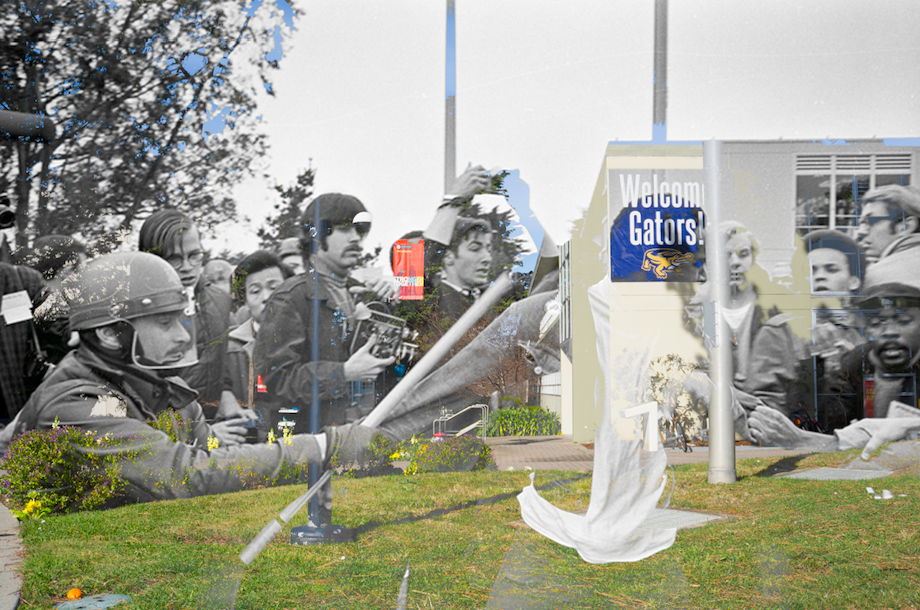 How the historic 1968 protests would fare today

In November of 1968, thousands filled San Francisco State University’s campus in a revolutionary strike to protest racial inequities in the school’s curriculum and admissions. For five months, Ronald Quidachay, a 21-year-old SF State student at the time, skipped class to join the ranks of his classmates, faculty and organizers to shut down the SF State campus in the longest student strike in U.S. history.

Despite this sentiment, he and hundreds of other protesters filled the quad day after day as leaders from the Third World Liberation Front and Black Student Union made their demands on the school’s Speaker’s Platform, the first of its kind nationwide. The platform, according to SF State’s archives, was built in 1962 as a free speech forum sanctioned by the school, free to be used by organizations from on and off campus.

During those five months, the platform stood as a rallying point for protesters and leaders of the strike to make their demands of the school. Fifty years later, the triangular patch of grass where the wooden free speech platform once stood now sits empty —  a vacant relic of a time that shaped the legacy and culture surrounding protest at SF State.

Today, the same strike that established the first ethnic studies department in the country would be deemed in violation of the school’s 2018 time, place and manner executive directive.

Executive Directive #89-13 lays out the school’s guidelines on assembly, tabling and signposting, explaining the possible repercussions one may face for violating said guidelines. The document references California Education Code 89031, which notes that California State Universities may establish regulations for the “government and maintenance of [their] buildings and grounds” and that “every person who violates or attempts to violate the rules and regulations is guilty of a misdemeanor.”

Chris Trudell, SF State’s Assistant Dean of Students, says that the time, place and manner guidelines are not meant to add any undue stress on students.

“There’s a lot of clubs and a lot of organizations, and a lot of third party groups that are not affiliated with SF State that want student’s attention, they want to market to students,” he explained. “The amount of requests that we will get in a given year, if we didn’t have a process, there would be groups that would be setting up at the same time, that would be overlapping with one another.’

Trudell continued to say that the directive is not in any way aimed at restricting assembly. Instead, he said, its goal is to ensure that there is a process that can organize the varying assembly and speech desires of SF State’s 30,000 plus students and faculty members.

David Loy, the legal director at The First Amendment Coalition, a Marin County-based group focused on addressing First Amendment violations and expanding freedom of expression, noted that the school is well within its right to establish reasonable time, place and manner restrictions.

The main goal of a college such as SF State, he explained, is to maintain a healthy learning environment. And maintaining that environment may manifest itself in the form of reasonable regulations on the volume and meeting location of assemblies.

Loy did express some concern at the trend of institutions such as SF State over criminalizing certain behaviors.

“Often, criminal prosecution creates a so-called solution worse than the underlying problem… and [it] has significant equity and justice problems,” Loy explained.

He also noted that aside from the obvious consequence of jail time, misdemeanor charges have the potential to impact one’s ability to stay in school, get a house or find a job in the future.

Time, place and manner guidelines, as they’re referred to in the directive, are not uncommon on college campuses, though, according to Mia Reisweber, one of the directors at the Dean of Students office.

All California State Universities have some form of regulation on the time, place and manner of assemblies on campus, along with many other colleges nationwide. Reisweber also added that while she was not present for the directive’s establishment, the goal of their office is to help students navigate these and other complicated campus guidelines.

Despite the help available to students now, the directive still isn’t the first instance of SF State employing misdemeanor charges as a warning to those who may try to assemble on campus without permission.

During the 1968-69 strikes at SF State, as is outlined in a document published by the San Francisco State Legal Defense Committee titled “Insanity at the Courts,” 435 protesters in attendance at a Third World Liberation Front speech outlining the 15 demands of the strikers were arrested and subsequently tried for unlawful assembly. All those arrested were tried for misdemeanor crimes, with a large portion convicted on at least one of the three proposed charges.

Quidachay recalled being arrested in a similar situation as an “insurrection leader” before later being charged with disturbing the peace. While he received a fine and no jail time, Quidachay noted that other strikers faced heavier consequences.

“The minor thing that happened to me was I flunked a class,” he recalled. “Then other people, if you got arrested, were going through trials.” Quidachay also remembered the brutality of the police at the time when it came to engaging with and arresting protesters.

Currently, no record shows any charges have been made against students under the 2018 directive. However, some say that the school has limited assembly more than they might admit, claiming the rule introduced an environment of fear that prevents people from organizing.

Damara Lopez is a former SF State student and president of the San Francisco chapter of the Movimiento Estudiantil Chicano de Aztlán (or MEChA), a nationwide student political organization focused on bringing awareness to issues affecting Latine and Chicano students.

They noted that after a 2016 hunger strike conducted by students from the Third World Liberation Front led to the group securing additional funds for the ethnic studies department, the culture surrounding protest on campus changed.

Lopez said that even before the time, place and manner directive was established in 2018, they and others were fearful they would be prosecuted by the administration.

“[E]very student group was feeling this pressure of like, ‘We’re being watched, we’re being surveilled.’ Students would get pulled into interrogations or would be put in like holding cells down in the police station area… there was a really bad culture of fear,” Lopez recalled. “I think the only reason why we don’t have it anymore, and why people aren’t so afraid now is because memory is short… the people who were there have mostly graduated, and the people who were not there, don’t know, or just couldn’t possibly understand how intense it was.”

Lopez also said they initially felt access to the document was being gatekept, making it harder for their and other political student organizations to understand the newly established guidelines and avoid persecution for violating them.

Whether or not this culture of fear is still pervasive on campus today is debatable. The number of political actions on campus has decreased over the past few years, but that could also be attributed to restrictions from the pandemic. However, at the beginning of the Spring semester, tables for student clubs, fraternities and other organizations filled SF State’s Malcolm X Plaza as they had in years prior to the pandemic.

Some groups, such as the League of Filipino students, have even been able to organize actions both on and off campus since the return of in-person instruction.

More recently, LFS hosted an emergency action on campus to bring awareness to the killing of five activists dubbed the “Bataan 5” in the Philippines. The action took place in Malcolm X Plaza and brought together about 20 students to join in chants and fill the quad with chalk messages of support.

Soriano noted that despite their ability to meet and assemble on campus, she feels the group is treated slightly differently from other student groups.

“There hasn’t been direct like, ‘Oh, we’re not going to give you this because you’re like a political organization,’” Soriano explained. “[but] they view us a little different…which makes sense because political organizing and activism… lead to change, you know? So, I think at times structures and systems of power, such as SF State and the administration, are scared or fearful of that.”

While SF State’s administration has not seemingly restricted any one person or organization’s right to free speech with the time, place, and manner directive, organizers like Lopez and Soriano find the practices of the school to be ironic given the school’s rich history of protest and assembly.

Amaro Rivera, a current student at SF State and former political activist alongside Lopez, voiced similar sentiments. They recalled first arriving at state and feeling that there was a powerful sense of coalition among student political organizations on campus. However, they would continue to explain that dealing with the politics associated with the 2018 directive became too mentally and emotionally taxing, causing them to take a break from political action.

Quidachay, who participated in negotiations with the school to end the strike, ran for student body president after its conclusion. However, after a controversial nullification of the election by the school’s at-the-time President S.I. Hayakawa, he and others from his camp opted not to participate in the follow-up election in protest.

Quidachay decided to focus on his studies after that, leaving SF State in 1971 and graduating from Berkeley’s law school in 1974. After the strike, he served as a judge in San Francisco’s superior courts for more than twenty years before his recent retirement.

However, he still cites the protests as one of the formative experiences of his young adult life.

“Although it was a short part of my life,” he said, “everything I did stayed with me.”