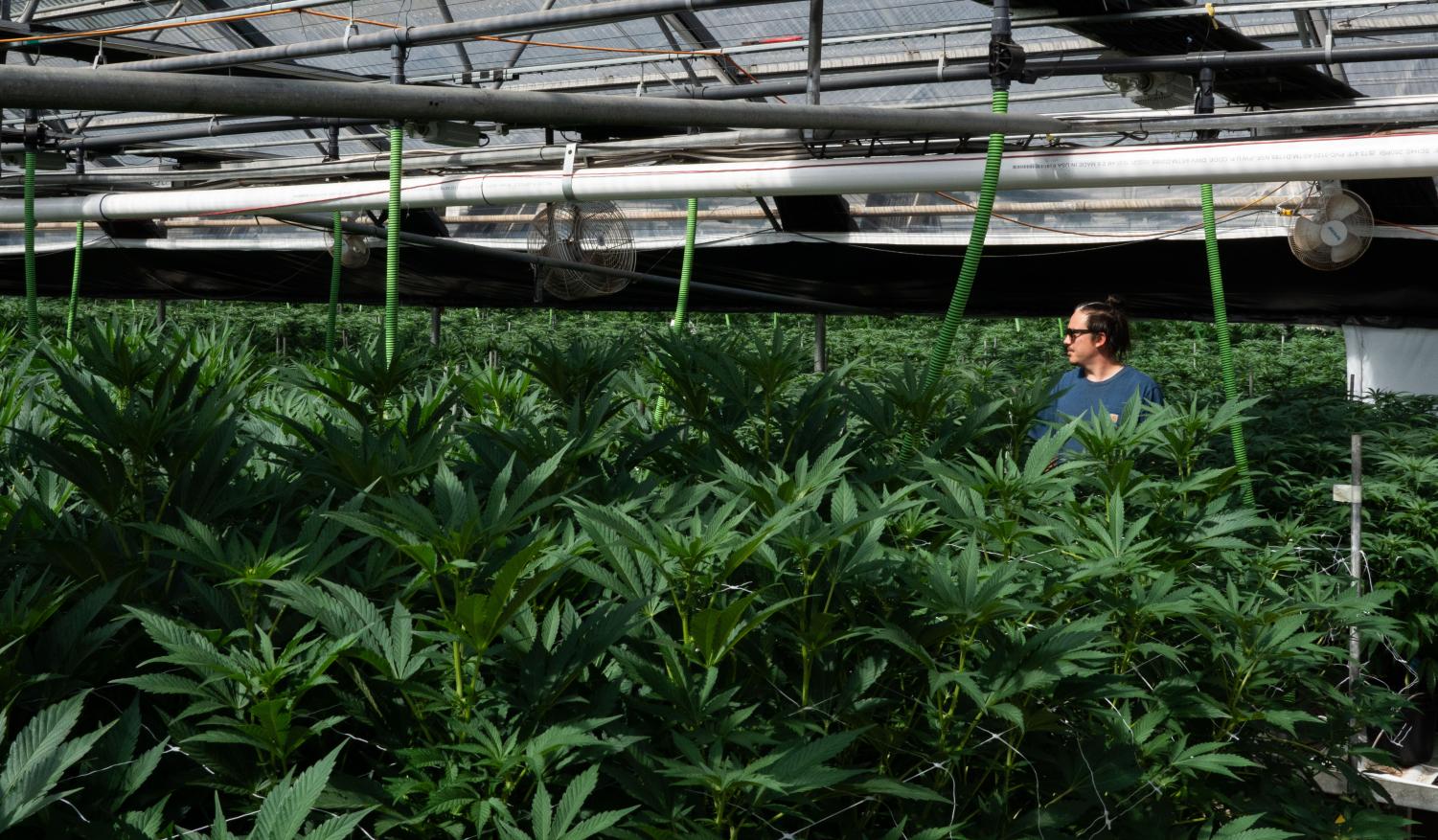 Ed Wilkinson, a founder and current COO of Half Moon Grow, poses for a picture inside his greenhouse in Half Moon Bay on April 6, 2022. Wilkinson also rents out greenhouses for other growers at the same location. (Rashik Adhikari / Xpress Magazine)

Ed Wilkinson, a founder and current COO of Half Moon Grow, poses for a picture inside his greenhouse in Half Moon Bay on April 6, 2022. Wilkinson also rents out greenhouses for other growers at the same location. (Rashik Adhikari / Xpress Magazine)

Why commercial cannabis keeps getting stronger.

The rows of locked glass cases in Bay Area dispensaries display colorful jars and bags of premium Cannabis for customers to choose from, like fine jewelry. Much like the ingredients on the back of a cereal box, the THC and CBD content of the cannabis is clearly stated on the packaging.

These frosty, dark green, dense nugs sold in dispensaries are much stronger than the oregano-looking weed smoked just a few years ago.

“Twenty years ago, you would just smoke 10 times as much to get the same amount of high,” said Edward Wilkinson, owner of Half Moon Grow, a cannabis farm in Half Moon Bay.

When customers visit a dispensary, many will search for products with the highest percentage of THC content because they think it will give them the best high, but there is much more behind what determines potency.

THC, or Tetrahydrocannabinol, is the main psychoactive component in marijuana that produces the “high” effect but is not the only thing contributing to a person’s experience of marijuana.

The newfound fixation on high THC percentages in cannabis is causing the market to skyrocket while consumers search for the best high possible. In a national study done by the University of Mississippi National Center for Natural Products Research’s Potency Monitoring Program, cannabis potency has risen from an average of 3.96% in 1995 to 14.35% in 2019.

For consumers, to puff on the highest THC percentage weed guarantees an epic high, but for those working in the increasingly competitive, $61-billion cannabis industry, this fixation has had some negative consequences.

The legalization of recreational marijuana in 2016 led to a heightened interest in the cannabis industry and opened the door to many new storefronts and growing facilities. The small family grows focused on the traditional, “hippie” view of cannabis are being overtaken by larger, more competitive farms that produce a high percentage product and more money.

“My worst fear is to just see the plant kind of taken and turned into something that gets a little too commercialized,” said Halle Pennington, a product executive at Humboldt Seed Company.

According to cannabis growers such as Wilkinson, many dispensaries will not buy strains under 20% THC due to the demand from consumers for strains with high THC content.

Alex Garcia, Head of Distribution for SF Cultivators, explained that this behavior is mainly driven by new customers who assign more value to the higher THC strains without the knowledge that THC is only a small component of their high.

In the marijuana plant, as well as other plants, there are naturally occurring chemicals known as Terpenes that are responsible for its aroma and flavor. The various scents of the marijuana plant, like fresh pine needles or skunk fumes, are created when terpenes are combined. These terpenes are bioactive and can affect the body much like aromatherapy and some people, like Garcia, believe they can enhance a persons’ high due to the entourage effect.

The entourage effect occurs when the different parts of cannabis, such as cannabinoids, compounds found in cannabis plants such as THC and CBD that affect the brain, and terpenes are combined to produce a more intense overall high for the user. The combination of these elements in the cannabis plant intensifies a person’s high and can produce different effects for those smoking it.

Pennington explained that the plethora of accessible information has made it easier for consumers to understand and visualize the effects of terpenes; however, many people are still chasing the THC numbers.

“At this point, the consumers are leading the industry in a sense, and they’re definitely leaning in the direction of higher and higher THC,” Pennington said.

By selective breeding, the process of only breeding plants that produce high THC numbers, growers and breeders can meet the consumer’s demands of high THC percentages. This technique, however, causes lower-percentage strains to go extinct.

The purple buds and orange hairs of Tropicana Cookies, a sativa-dominant hybrid strain grown by SF Cultivators, produced an energetic high and citrus taste. The strain even received a 4.5 out of 5 rating on Leafly, a website where consumers can connect with and buy trusted, legal cannabis from local stores.

“The nose on it was like you’re hacking down citrus plants,” said Garcia, who enjoyed the strain many times. “The high of it made you feel like Superman. You’re out doing shit! I would smoke it and go run with my dog for miles.”

Garcia explained that dispensaries stopped purchasing Tropicana Cookies, and if they did purchase it, they wanted it at a discount.  Many customers were not interested in it because it was only 16% THC.

“I’m sure people who care about those genetics will hold on to them and stuff, but you lose them from that commercial shelf,” Garcia said.

The most common reason people use medical marijuana is for pain management, according to the CDC, but it is also used to help cope with mental health issues such as anxiety and depression. Marijuana is also commonly used to help calm those with nerve pain, nausea and migraines. For others, recreational marijuana just makes them feel good.

For Pennington, who was born into the cannabis industry, marijuana is more than just a business. Pennington grew up in Humboldt, a Northern California town responsible for approximately six million pounds of cannabis annually, according to the 2017 Department of Food and Agriculture’s Standard Regulatory Impact Analysis.

Her parents grew marijuana on their property, and when she was younger, she was never told the difference between the marijuana plants and their garden vegetables. Watering and tending to the plants were just part of their daily routine.

Although consumers enjoy these high THC strains, the numbers cannot physically get any higher.

“There has to be plant matter and like all these other things,” Pennington said. “If you’re saying that it’s over 40% THC, I would imagine that, in the sun, that bud would turn into  mush.”

Testing labs in California, which are responsible for testing the THC levels in marijuana, have taken a much more competitive approach when determining THC potency, Pennington explained.

“The fact that there’s not an across-the-board testing standard for that definitely has made a difference. I see labs hint that by going to them, you’ll get a better test result than you would if you go to another lab,” Pennington said. “They’re just trying to stay in business at this point.”

Many cultivators, such as Garcia, hope that the future of the cannabis industry will not revolve around numbers, whether it be the percentage of THC or the revenue it produces, and instead get back to the roots and experiences the industry was built on.

“Maybe it’s something that’ll go away, like when people get close enough with their budtender because I feel like people have their shop,” Garcia said. “They develop a relationship with the shop and can ask them more specifically what they’re looking for instead of just wanting something super strong.”