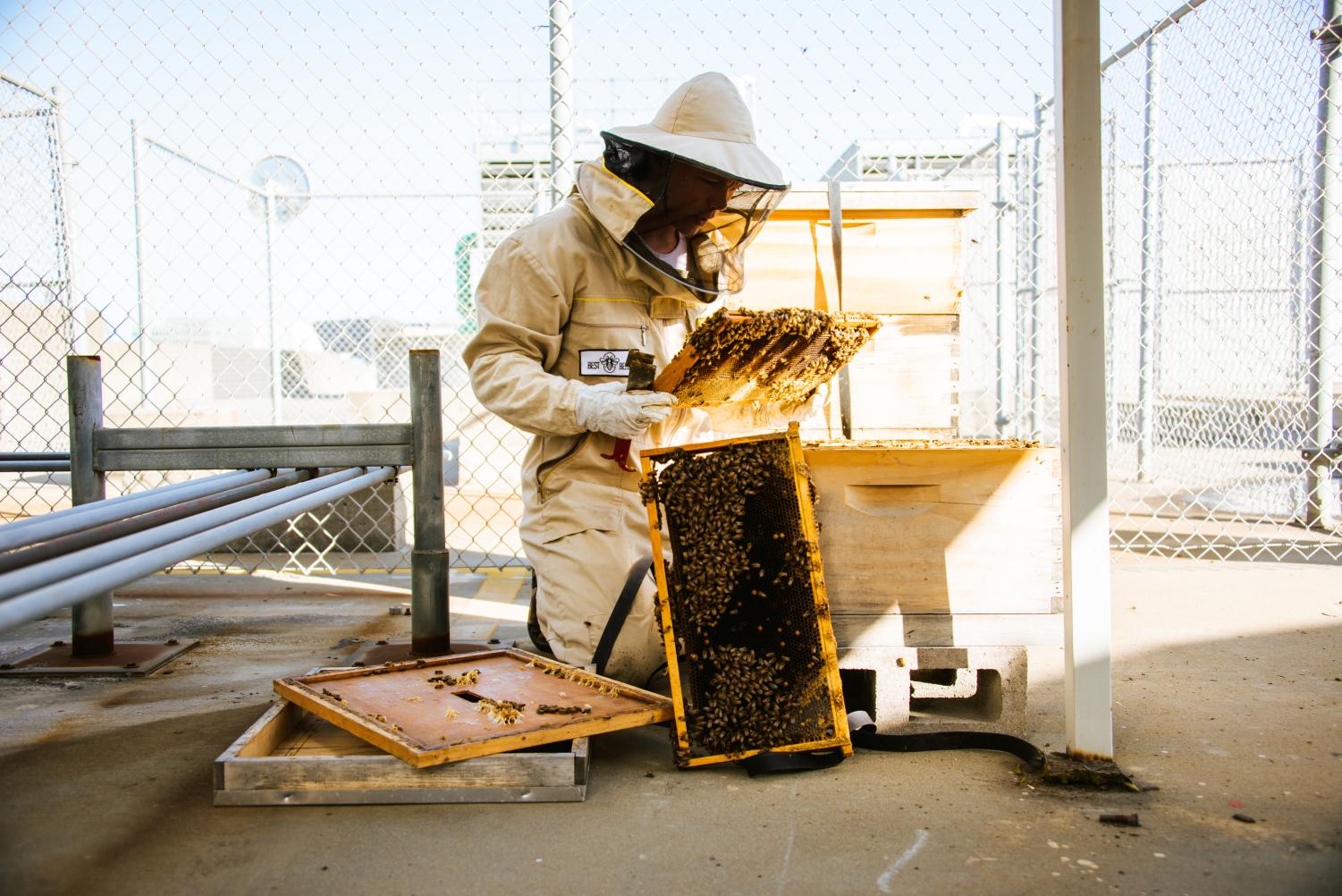 Lars Archer removes a frame from his newest hive on the roof level of a parking garage in SOMA on April 12, 2022. In his time as a beekeeper, Archer has experienced losing a hive and mentioned the hardest thing for him is understanding what happened and preventing it from happening again in future hives. (Garrett Isley / Xpress Magazine)

Lars Archer removes a frame from his newest hive on the roof level of a parking garage in SOMA on April 12, 2022. In his time as a beekeeper, Archer has experienced losing a hive and mentioned the hardest thing for him is understanding what happened and preventing it from happening again in future hives. (Garrett Isley / Xpress Magazine)

The Buzz Around Urban Beekeeping

Nestled between vibrant green trees and stone-paved paths, Philip Gerrie gently puffs pine needle smoke on his honey bees to calm them before pulling out each frame from his hives. Dressed in long sleeves and pants with a beekeeping veil over his head, Gerrie’s ungloved hands carefully inspect each frame one at a time, checking the health of the hive and the quantity of honey produced.

For the last 20 years, this has been part of this San Francisco beekeeper’s routine. Gerrie mostly works independently in his backyard under the branding of Noe Valley Bees. His three beehives are nestled in the corner of his backyard in his quiet home located in the Noe Valley neighborhood.

“It’s always exciting. Beekeeping is never dull,” he said, noting how bees and people have similar habits. “I wouldn’t call it sacred, but it’s going into a part of nature, like going into a church.”

Gerrie had always been fascinated with bees as a child but never had the opportunity to own his own hive since his family did not live in one place long enough. Once he turned 50 and was in a more permanent place, it dawned on him that it would be the perfect time in his life to start keeping bees. After his revelation, he went to his local SF Beekeepers club, and within a couple of months, he had bees of his own. He now mentors new beekeepers part-time, aiding in beehive extractions and site surveying.

During the COVID-19 pandemic, the niche of at-home projects blossomed. From renovations to learning new skills, beekeeping became a new interest to many in cities across the U.S, including the Bay Area.

According to an email from the San Francisco Beekeepers Association, the city’s leading organization for beekeeping, the organization had an increase of about 50-plus people attending their intro to beekeeping classes held via Zoom during 2020 and 2021. It saw the most increases among their Beekeeping 101 Equipment class and their Beekeeping 102 Beekeeping Basics class this year, with 68 participants per class.

Cities in New York have also experienced an increase in beekeepers throughout the pandemic, according to the New York Times.

Aside from mentoring, Gerrie also sells his own honey locally. He has accumulated 1,000 pounds of honey from last season. He stores the leftover honey in five-gallon tubs in his attic that’s lined with empty hives, a desk for working and equipment to extract honey. 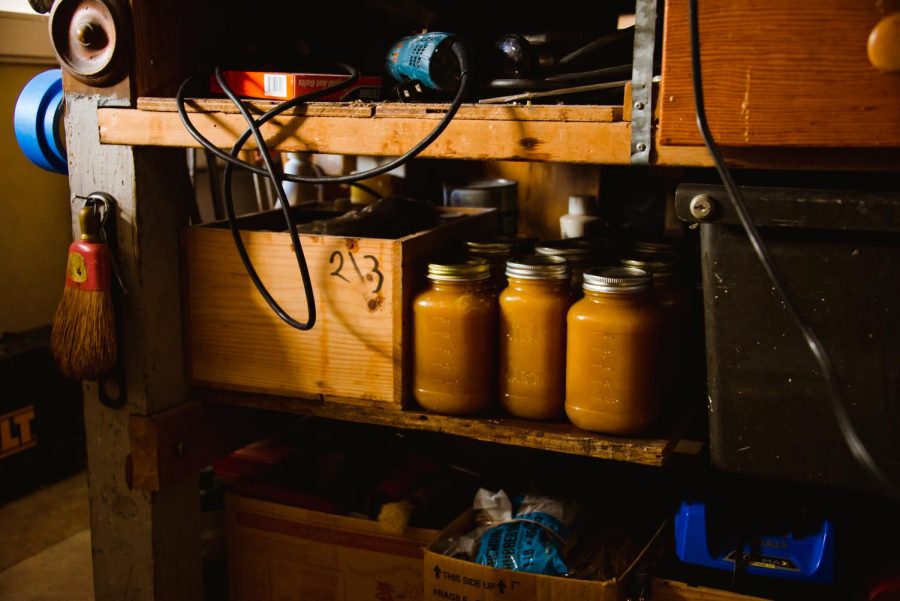 Gallery|4 Photos
Jars of honey sit on the shelves of San Francisco beekeeper Philip Gerrie’s attic in his Noe Valley home on April 1, 2022. Gerrie processed and jarred nearly 1,000 pounds of honey from last year’s season and stores most of it in his attic. (Garrett Isley / Xpress Magazine)

“I sell a few jars every week depending on where I go,” he said, noting how he keeps several jars with him in his truck since people tend to ask if he has any for sale.

“The honey in cities, in general, is better.​​ There are less pesticides or stuff in honey in the city. It’s also better diversity. So having a diversity of flowers, having as natural as possible, which is in our urban or suburban communities, makes for healthy bees,” he said.

Another beekeeper who has felt the impact of beekeeping in the Bay is a San Francisco-based beekeeper and board member of the San Francisco Beekeepers Association, Peter Wohlers.

Wohlers’ entry into beekeeping nine years ago was accidental. He volunteered to have hives be placed in his backyard under the impression that someone else would be tending to them. It was only after their original owner handed him a pair of gloves and asked if they fit did it dawn on him that he now would be tending to the hive himself.

“I kind of freaked out because it was not my intention at all,” he said. “You go over and look at the hive and watch the activity of this growing feral colony of organisms in your backyard, and all of a sudden, it’s relaxing to sit and watch. It became really mesmerizing.”

Wohlers, who joined the board around the beginning of the pandemic and currently has two active hives, saw the increase in beekeeping as a way for people to get involved with activities that were new or interesting to them.

“It’s one of those things where most people are interested in beekeeping until it actually comes time to do beekeeping. They’re really excited by the idea, but they don’t want to really interact with them,” Wohlers said. “ I think the pandemic might have actually changed some of that perspective, just because people were tired of looking at the same four walls.”

However, beekeeping can come with unfortunate dilemmas. Wohlers mentioned how varroa mite, parasitic mites that attack and feed on honey bees, infestations are a leading but manageable issue with maintaining beehives, noting how he has lost several hives to it.

According to the Bee Informed Partnership’s annual survey, a national research lab and collaborator with universities in agricultural science, beekeepers in California lost a total of 30.96% of their bee population for the 2020-2021 year, with an average of 2.285 varroa mite infestations per 100 bees.

“Everybody will have colonies collapse on them. Sometimes you just can’t prevent it,” Wohlers said. “Everybody struggles with varroa mites, and that’s sort of like a common theme across all of North America.”

JSTOR Daily, an online publication that combines the JSTOR library with current events, explained how urban beekeepers might be more prone to varroa mite infestations due to treatment-free or natural methods they choose.

“That’s sort of a challenge. That’s because people want concrete answers on how to do things. And with respect to beekeeping, there are not always concrete answers,” Wohlers said.

He noted how though there are ways to handle unexpected situations like previous examples or best practices, there still is a need to be able to adapt when former solutions don’t work.

Beekeeping in an urban setting doesn’t always have to take place in a backyard. Lars Archer, a professional beekeeper for the Best Bees Company’s San Francisco branch, spends his time working with hives across the Bay Area in both commercial and residential settings.

One thing that sets this style of beekeeping apart from others is attention to detail. He said that while the industrial and agricultural beekeeping industry can be focused on making pollination quotas and cannot really nit-pick over the health of their thousands of hives, urban beekeeping can.

“I think it’s really a product of the agriculture industry that demands so many bees but continues to use pesticides and insecticides which are detrimental to bee health,” Archer said, “We really want to figure out, kind of put together the whole timeline, the narrative about what’s going on with this beehive.”

According to the Best Bees website, they install and maintain honey bee hives throughout urban communities. Their mission is to help combat the decline in pollinator health through their research. Archer focuses his time on data collecting while in the field, specifically when it comes to colony health. With each hive, he looks at how the queen bee is laying eggs, how many bees there are, if they’re bringing in enough food, any sign of diseases and more.

“I think my biggest struggle is not knowing sometimes [what] you did wrong. If you lose a hive and not be able to really figure out what was the exact cause, how can I prevent that from happening again,” Archer said.

He noted how beekeepers all over have experienced many hive losses.

“That’s why I’m really fired up to keep it going, keep beekeeping and learn more. It’s just sad when you show up at what could have been a really robust, a really busy hive [and] a couple of weeks later, and it’s gone.”

“I’m supporting a really crucial ecosystem function. A critical part of our food system is bees. My grandfather taught me how to do this, he was a really important figure in my life, [and] continuing to do this is kind of a way to connect with him,” Archer said, “So, it’s something I’m very proud to be doing so frequently now.”

Like many beekeepers, Archer has been trying to support and generate healthy bee colonies.

He believes that getting more people to be hands-on could help by using both physical and virtual resources. He also noted how the Bay Area is a great place to learn since its climate rarely resembles a traditional winter.

“As we start to navigate these rough waters of climate change and of weather patterns changing and just broadly things becoming more unpredictable, environmentally and ecologically, I think it’s going to be important that we have a lot of people building knowledge and sharing knowledge together,” Archer said.

Bee colonies are made of three types of bees who share different but crucial roles.

The main bee-type is the queen. There is only one queen per hive, and she is the only one who reproduces. She can leave the hive under two circumstances: to mate or, in some cases, with a swarm.  Once she mates with up to 80 drone bees, she will return to the colony to lay her eggs.

The second type of bee are drones. These are the only males in a hive, and they are the largest. Their main and only purpose is to spread the genetics of their colony from one colony to the next. Once they mate, they die. If they are unable to mate, they return to their hive to eat resources. After a swarming season, if they are still alive, they end up using valuable resources and get evicted by workers.

The last type of bee is the worker. These are also female bees and the smallest. Their job is to forage, feed the young, produce honey, wax and storage and defend the hive from intruders. Their lives can last from 4 to 6 weeks during an active season.