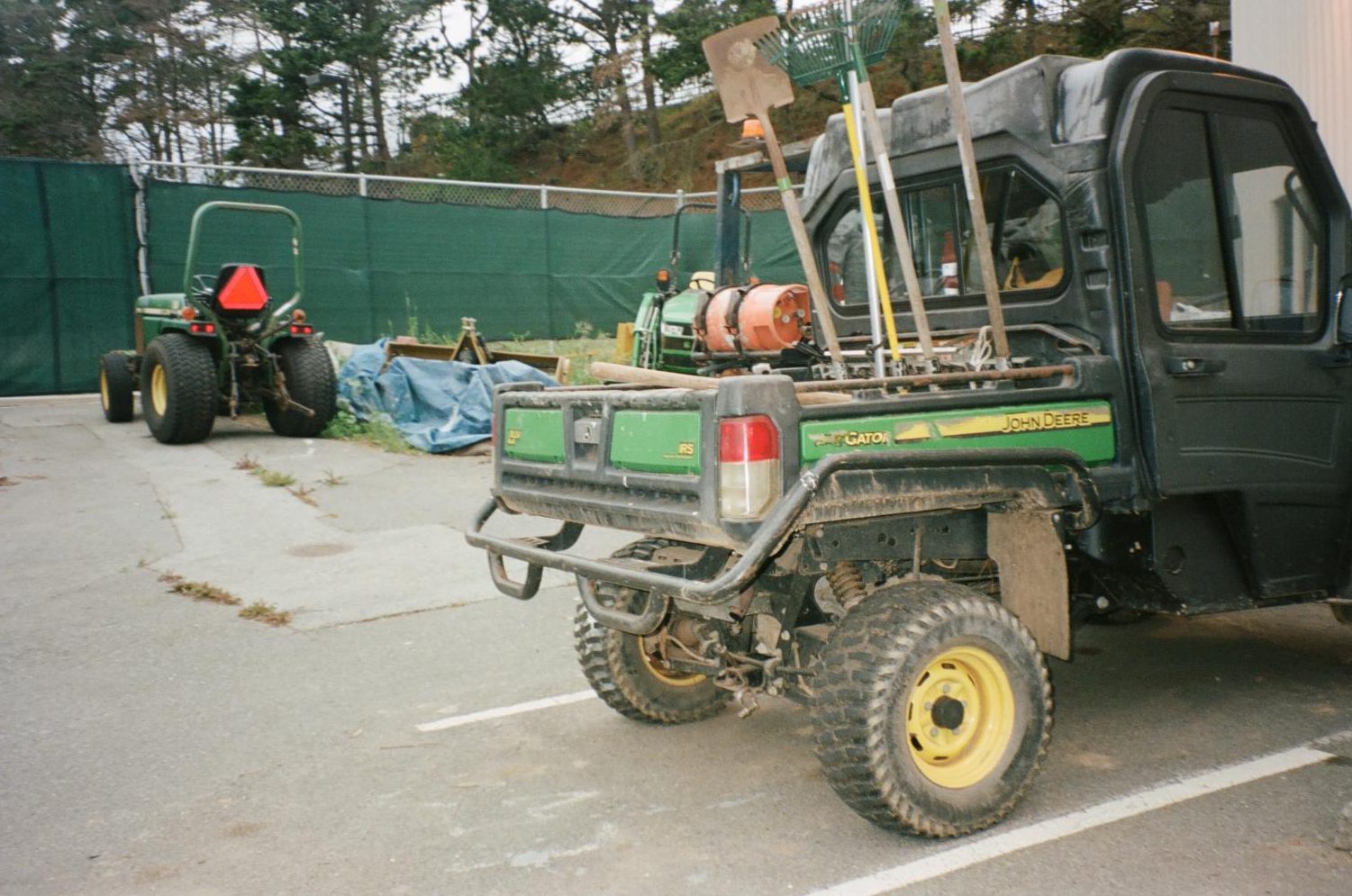 A John Deere utility vehicle sits outside of the groundworks facility on March 29, 2022. The groundsworkers use this to travel around campus early in the morning to conduct their routine maintenance. (Rene Ramirez / Xpress Magazine)

A John Deere utility vehicle sits outside of the groundworks facility on March 29, 2022. The groundsworkers use this to travel around campus early in the morning to conduct their routine maintenance. (Rene Ramirez / Xpress Magazine)

They Speak for the Trees

When SF State grounds manager Robert Murphy and the rest of the grounds team arrive on campus at 6 a.m., it is eerily quiet. The sun won’t rise for another hour, and students and faculty won’t begin arriving at their morning classes for another two. By that time, though, the school’s grounds team will be done or well underway with the campus’ required daily maintenance.

The campus’ collection of approximately 2,800 trees and just as many plants, all with varying water and temperature needs, require around-the-clock attention in order to survive. SF State’s grounds team is a group of 14 groundsworkers, gardeners, tree trimmers and water and irrigation specialists that gives the greenery that attention.

Murphy, who has been the campus’ grounds manager since 2019, said understaffing issues stemming from the pandemic as well as state-proposed sustainability regulations have introduced new hurdles to maintaining campus greenery.

“We’re down to 14 [people]; it used to be 20. We used to have a tree crew; we don’t have that. We’re having a really hard time finding people,” said Murphy, who has also led the landscaping teams at schools like San Mateo Community College and Stanford University. “Anything that’s a specialty or takes some education or time, or we can’t find anyone… even the groundsworker, that position’s been open. I have had a groundskeeper position open for three years.”

In an August 2020 University Budget Committee meeting, SF State President Lynn Mahoney and other administrators discussed a “workforce reduction” and “hiring chill” as a means of addressing the budget deficit caused by the predicted enrollment decrease at the time.

Both of these were felt by the grounds team.

During the pandemic, SF State’s 40-acres of landscaping were maintained by just three people on some days, according to Murphy. At times, those who tended to the plant life were the only ones walking the paths of the mostly deserted campus.

Alejandro Hernandez is a gardener on the team and was one of the three that remained throughout the pandemic. He said that despite their initial fear, those who worked through the pandemic were able to maintain the campus’ plant life with the smaller team.

Now, despite the fact that the team is 14 people strong, an exponential increase in foot traffic from the height of the pandemic makes it such that the larger team is just able to cover the school’s day-to-day routine maintenance.

Murphy said the team is left with little time to work on bigger, more creative landscaping projects. Instead, he explained, the team is forced to constantly play catchup with the maintenance of the grounds in order to keep them up to code.

Meanwhile, new regulations that have banned certain herbicides and power tools have made routine maintenance that much more complicated.

“This lawn that I used to be proud of is full of weeds,” Murphy said. “Projects take a lot of time, effort and focus. And when you pull people off the regular maintenance, that means the debris piles up.”

Monday to Friday, Hernandez maintains the campus’ serene Garden of Remembrance and fills the school’s flowerbeds with an extensive array of color-coded purple and gold flowers.

He said that he and others have had to take on jobs they usually wouldn’t have to with a full staff. In addition to maintaining the flower beds on campus and the schools’ Japanese Garden of Remembrance, Hernandez spends most mornings helping out lead groundworker Erasmo Flores with his work in the quad.

Prior to the pandemic, the two explained, the grounds team had five people working to maintain the quad. Now Flores covers the area by himself.

“Right now, it’s just him, and he’s struggling. I don’t know if they’re going to hire more or if that’s going to happen in the future,” Hernandez explained, leaning on the back of an equipment-filled cart. “We need some more people because it’s a lot of work for us.”

Despite the extra coverage, Flores mows the entirety of the quad by himself like clockwork, only stopping when he’s hit all the edges of the expansive lawn with the faded red Groundsmaster 345 he rides.

In addition to the understaffing brought on by the pandemic, the grounds team is also adapting to changing regulations surrounding sustainability practices.

According to a sustainability commitment published by the school, SF State is “committed to reducing its greenhouse gas emissions 40% below 1990 levels by 2030.” Prior to this, SF State already had a track record of making changes for sustainability reasons.

In fact, the school is one of the top-performing universities in the nation in terms of water conservation, tying for first in the Association for the Advancement of Sustainability in Higher Education’s 2021 Sustainable Campus Index.

According to Murphy, water is the first thought for everything the grounds team plants. He explained that because the campus uses drinking water for the plants, a central irrigation system such as the one that SF State uses is imperative to cut down on excess water usage.

Some efforts to increase sustainability in the landscaping process have made work harder for the grounds team.

Though the bill only applies to engines produced during or after January 2024, Murphy is already looking into implementing zero-emission equipment, suspecting that the state will fully prohibit the usage of engine-powered tools.

The implementation of electric power tools comes with its own challenges, though.

Juan Torres, the team’s only tree trimmer at the moment, trims the campus’ seemingly never-ending supply of shrubs and trees, some more than a hundred feet high, keeping walking paths clear for pedestrians.

He explained that he used to be able to bring more of his personal equipment but has recently used some of the electric equipment that the grounds team tested.

“The electric [tools], they’re not noisy, and that’s good… there’s no smoke,” Torres explained as he collapsed his extendable tree-trimming saw. “But [it]’s only like two hours or one hour and a half, the battery, when I use it.”

He added that while the tools are okay for smaller jobs, bigger ones, such as blowing the eucalyptus leaves around the school’s outdoor track, take far longer than they used to.

Despite the challenges that come with the work, grounds team members like Flores, Hernandez and Torres continue to maintain the campus’ diverse landscape for students, faculty and visitors alike.

While a majority of the campus-living student body sleeps, the team is spread across campus, mowing lawns, pruning low-hanging branches, watering plants and picking up litter. They arrive on campus at 6 a.m., Monday to Friday, making sure to do the loud work first so as to avoid interrupting classes later in the day. They spend the later morning and early afternoon watering lawns, maintaining the plant life by housing and finishing any number of other miscellaneous maintenance that needs to be carried out on campus.

And while each person carries out a different job, they all display a similar pride in their work.

Hernandez, who gardens at home as well, maintained a unique fondness for his work on campus, noting that all the work they do is to prepare the campus for students.

“We’re just trying to do this, as much as we can, little by little.” 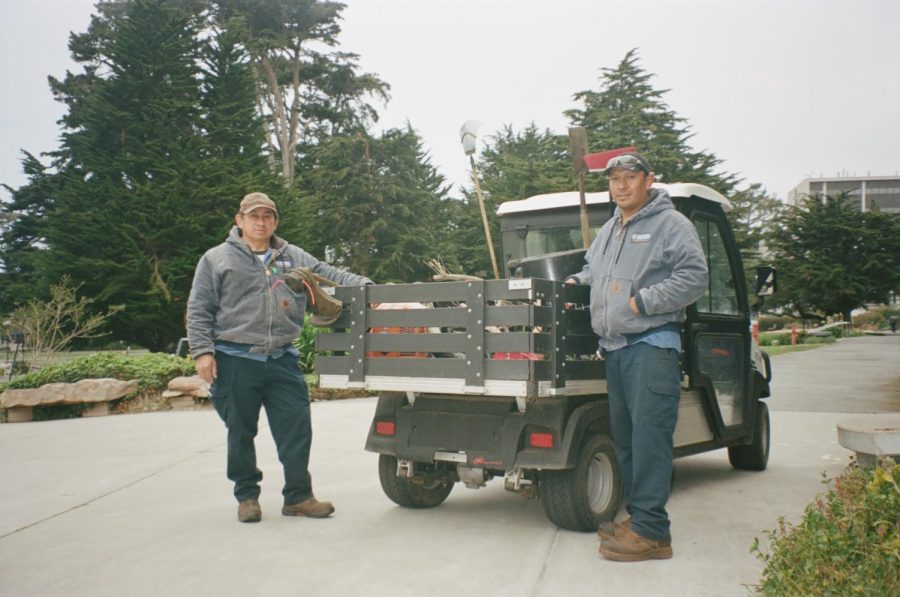 Gallery|5 Photos
Erasmo Flores (left) and Alejandro Hernandez (right) pose for a picture as they continue to work on the quad on campus on March 29, 2022. The grounds crew had five individuals working to keep the quad in good shape. Flores now covers the entire area on his own. (Rene Ramirez / Xpress Magazine)
Leave a Comment