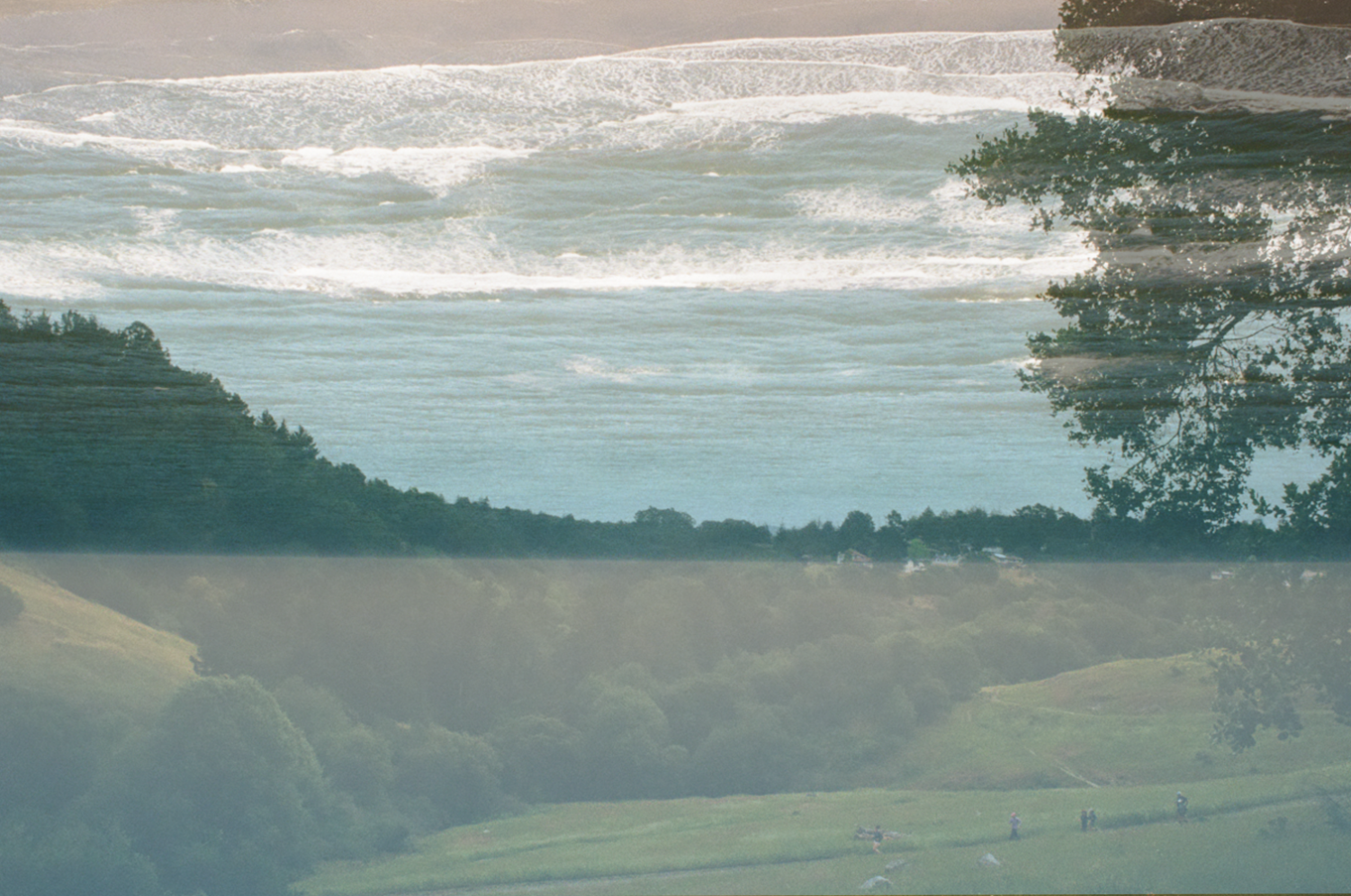 Forage for the Future

The Wild Foods Community of the Bay Area

In less than a month, Heidi Herrman will reunite with the ocean tides along the Sonoma coast, waiting patiently for the receding water of early sunrise. Herrman and her assembled team of 10 will soon load their backpacks, squeeze into rain boots and have their scissors equipped and ready for the few hours the ocean grants them to harvest seaweed.

For the last 14 years, Herrman has spent a grueling 14 days each year collecting, processing and drying the seaweed all within the same day. On those days, she rises with her team around 4 a.m. and takes a 45-minute drive to the beach to harvest around 200 pounds a day of seaweed until 9 a.m., when the tide pushes them back to shore. After harvesting, Herrman spends the rest of the day at the processing facility, rinsing the seaweed and laying it out to dry.  Although she is drained by the end, those 14 days are enough to serve as her primary income for the year, selling her findings to restaurants and stores all over the Bay Area.

“It’s really exhausting, and I’m wrecked by the end of it, but it’s just those 14 days of the year for my main income,” said Herrman. “It’s brief but crazy.”

The Bay Area is filled with other people who, like Herrman, forage for edible plants and fungi. Instead of heading to the nearby grocery store, foragers are interested in discovering and educating themselves on finding safe wild foods, like mushrooms and seaweed, that grow locally in nature.

Thousands of years ago, before the advent of farming, humans were hunter-gatherers and worked in tandem with nature. Due to technology and the convenience of modern times, society has grown more disconnected, according to Richard Louv, author of “Last Child in the Woods: Saving Our Children from Nature Deficit Disorder.” Urban foraging has increasingly become more popular on account of the positive, sustainable impacts as well as a way for people to get reconnected with nature and their own food according to the Journal of Urban Ecology,.

As a clinical herbalist and nutrition consultant for over 25 years, Tanya Stiller has developed a close connection with nature. She is an instructor at ForageSF, a wild foods community in San Francisco, and teaches classes about seaweed identification and ethical foraging. Stiller also has their own nonprofit called Healing Tides, which offers seaweed forages along with education on herbal medicine and healthy eats.

“The tides are my work schedule. I don’t get to be in charge. So that really gets me in tune and kind of respectful of not being a human in charge of things like ‘Oh, I have time on Tuesday.’ Yeah, no, the oceans’ in charge,” said Stiller. “Seeing fluctuations and populations of these different seaweeds and where you cut to get regrowth is a really intricate process to also help keep the ecosystem in mind.”

Harvesting seaweed typically happens around June and July, when there is more of a chance for receding tides. The best time for low ocean tides usually occurs in the early morning before sunrise. When the tides are low, the seaweed will then be exposed for seaweed foragers to then go in and collect what has washed up on the shore. In order for the seaweed to continue to photosynthesize in nature, only half of the plant is cut up with scissors.

Stiller has a special fondness for seaweed because of the health benefits this natural plant produces. Whether it’s accompanied by a hearty meal or used as a relaxing spa treatment, it has many beneficial factors. According to Healthline, seaweed is filled with an abundant number of vitamins and minerals like zinc, sodium, calcium and magnesium, along with small amounts of vitamins C, E and K. Similar to Stiller, Herrman likes to integrate seaweed as much as she can when she prepares meals.

“I just add [seaweed] into what I’m already making. Like if I’m making chicken soup, I’ll put some in there or chili or any bean dish,” said Herrman “I add it to that because it helps break down the fibers in beans. The mix takes away the gas effect. But I’ll put it in rice, powder the nori over toast, eggs and popcorn. It’s easy to incorporate kind of everything when it’s in the powdered form.”

Different types of seaweed like nori and bull kelp can be found around the Bay Area coast. Along the Sonoma coast, north of Bodega Bay, people are allowed to harvest up to 10 pounds a day with no permits, according to the California Department of Fish and Wildlife. In order to harvest more volume, both Stiller and Herrman are required to have a license from the California Department of Fish and Wildlife.

Seaweed is not the only edible find that has wild healing properties. Mushroom foraging is another trend that has gotten more people out of their homes and into the outdoors. Edible fungi are not only used as a tasty side dish but have proven to be useful within the medical industry too. Well-known medicines like Penicillin and Cyclosporine, an immunosuppressive drug, contain fungi. There are also many nutraceutical properties found in mushrooms, such as prevention or treatment of Parkinson’s, Alzheimer’s, hypertension, and high risk of stroke. According to iNaturalist, a citizen science app, over 1,800 species of fungi have been discovered in the Bay Area.

Foraging in California is strictly limited to most of the public lands. In Sonoma County, it is illegal to mushroom forage in regional, state and town parks. However, it is legal to forage along the hunting grounds of both Point Reyes and Salt Point State Parks, with limits to the number of fungi collected in a day. In some cases, the regulations are in place for safety reasons, as there are a handful of plants and fungi that are not safe to ingest.

With over a decade of experience exploring the Bay Area, Kevin Feinstein has shared his knowledge of foraging by writing books like “The Bay Area Forager” and “Crash Course in Wild Mushroom Foraging.” Even though Feinstein recently moved back to his home state of Tennessee, those after-work sunset adventure hikes in the Bay Area filled his time with great memories of all varieties of wild plants and mushrooms he was able to encounter.

“I got into it for, I would say, altruistic reasons. I wanted to solve the problems of the world. I realized that we were disconnected from nature and from food. And myself included. I was totally disconnected; I didn’t know anything about where food came from,” said Feinstein.

Feinstein shared that it takes keen attention to detail to forage for mushrooms. One has to become more engaged with their senses of sight, smell and touch. For beginning mushroom foragers, Feinstein says when encountering fungi the wrong question to ponder over is, “Is this edible?”

According to the academic article, Edible Mushrooms: Improving Human Health and Promoting Quality Life, mushrooms are a rich, low-calorie treat packed full of nutrients like fiber, riboflavin, potassium and selenium. Though the health benefits of mushrooms are an enticing factor, Feinstein’s indescribable relationship with nature that was created through foraging is what leaves a life-lasting impact on him.

Alexandra Hudson remembers being constantly surrounded by nature during her childhood. She spent a lot of time exploring Yosemite with her family, admiring all the scenery and wildlife that came across her path. Her curiosity about plants led Hudson to begin her studies in 2015 at the Berkeley Herbal Center, an education center that offers herbal workshops, herbalists certification programs and a student clinic. There, Hudson learned how meaningful edible plants could be for her own healing by developing a healthy relationship with food as medicine. Hudson prefers her experiences to be created by her own sweat and hands. She said she enjoys her own garden of forage finds like bay nuts and mustard flowers, which she incorporates into her own healthy recipes.

The Bay Area’s unique environment is overflowing with plenty of edible plants. In San Francisco, hidden around the pathways of Golden Gate Park, lies plants like chickweed, wild chamomile, miner’s lettuce, wild artichoke and elderberries, according to local findings on iNaturalist, a social network of naturalists and citizen scientists that map observations of biodiversity around their area. These wild plants are incorporated into culinary creations like flavorful salads and relaxing teas soon after picking.

Once foragers become more accustomed to identifying specific plants, Hudson says it becomes much easier to navigate through all the greenery.

Growing restless from wasting too much time in her home during the quarantine, Anne Chambers started going on daily morning walks to enjoy the fresh, crisp air. Her appreciation for nature grew, and she started to learn more about the edible plants that grew in her area. Those nature walks soon turned into foraging walks, as Chambers got her hands dirty and gathered fresh ingredients to add into lunch and dinner meals.

“Foraging has brought so much joy to me. The first food I foraged for were violets, which I make violet lemonade with,” said Chambers. “I had to look up a lot of things before I felt comfortable enough to actually eat [the plants].”

Vast amounts of research is key when beginning to forage for edible plants. The process  is not as simple as picking weeds from the backyard. Plants that are near roads and other highly trafficked areas could be riddled with pesticides or other contaminants of pollution, which are not safe to ingest. “The Flavors of Home: A Guide to the Wild Edible Plants of the San Francisco Bay Area” by Margit Roos-Collins is a local book that encourages people to harvest responsibly and sustainably, plus learn to make a great meal too.

There are many benefits when it comes to foraging for wild edible plants, according to Alderleaf Wilderness College, a nature and wilderness survival school. Wild plants can have more nutrients than regular store-bought fruits and vegetables.

Foraging locally also can help control the population of invasive species of plants. Invasive species are organisms that can bring ecological or economic harm to a new environment where it is not native, according to NOAA. Save the Bay, a wildlife non-profit organization, lists edible plants like wild mustard, fennel, himalayan blackberry and wild radish as species that were not locally grown in the Bay Area but brought over by settlers around the early 19th century. Foragers encourage picking these species since they grow in an overabundance.

“Foraging makes you aware of nature. There’s something about actually consuming food that you find yourself that makes you feel like you’re a part of that web of nature. You almost become that thing, and I think that changes your consciousness in itself. You are what you eat, right?” said Hudson.