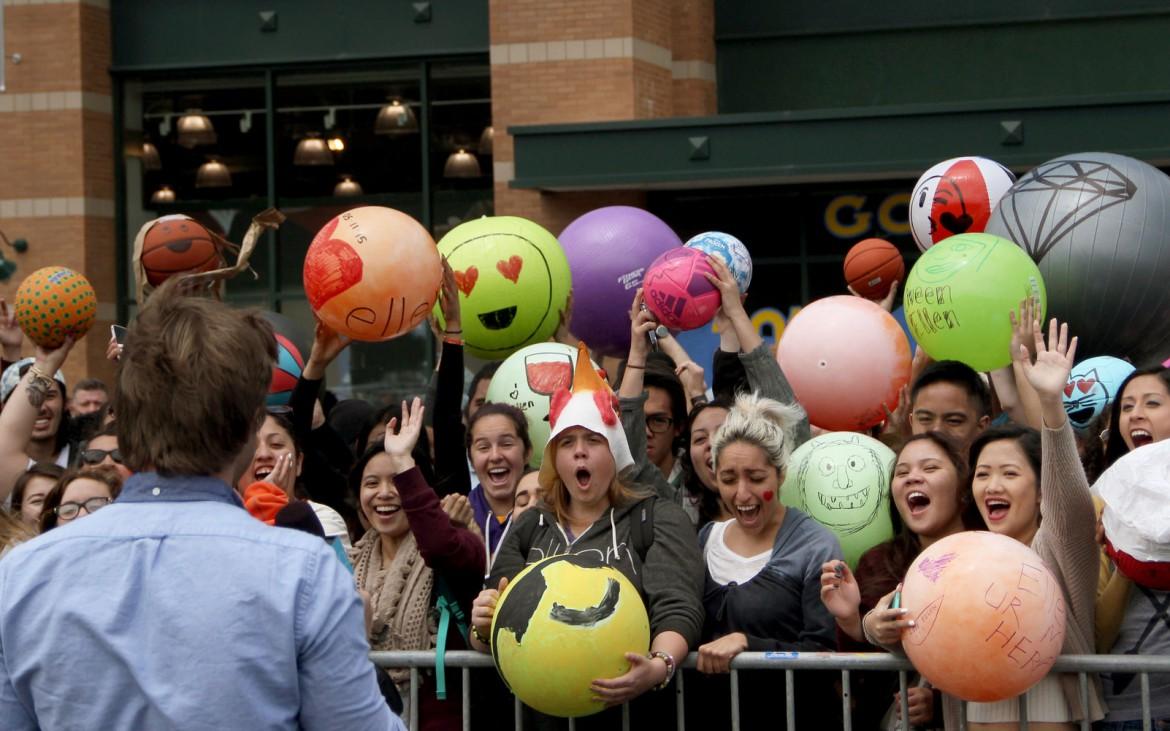 Some SF State students await with their designed Emoji balls to be seen on the Ellen DeGeneres show at Dicks Sporting Goods in Daly City on Monday, May 11. Photo by Angelica Williams/Xpress 2015).

Some SF State students await with their designed Emoji balls to be seen on the Ellen DeGeneres show at Dicks Sporting Goods in Daly City on Monday, May 11. Photo by Angelica Williams/Xpress 2015)

Twitter erupted with love for Ellen Degeneres this weekend when her account sent out a post seeming to say she’d be visiting our foggy little campus on Monday.

Even though the superstar was never confirmed to be coming to the campus, or even the area herself, the attention didn’t stop and the energy didn’t pop.

At 1 p.m., the account sent out a tweet finally announcing that the location of the shooting and instructions to bring balls with their favorite emojis drawn onto them. By 1:30 p.m., the parking lot at Dick’s Sporting Goods was starting to pile high.

“It makes sense why they’re here,” says Karrie Le, who found out about the taping from her friend and current SF State student, Marcos Zambrano. “This Dick’s is one of the biggest Dick’s there is.”

You could easily overhear that people didn’t expect for her to be there, but the excitement did not cease. The hashtag #SFSUonEllen had more than 100 posts in less than a few hours. But some still felt misled.

Overhearing things like, “Totally worth missing my finals review. Class of 2015!” and “Ellen, I just got hit by a car, can I be on the show? I’ll show you the bruises” you could tell how real the thirst for Ellen was.

As Ellen’s infamous associates, Jeannie and Ian from the Ellen Show started announcing to the crowd exactly what the emoji balls were for. Before the talk show assistants could even get through the introduction, the crowd’s cheers and shouts echoed high over any amount of sound he could make through his microphone.

Even Ian announcing that the group who had already been there for an hour would be waiting another two hours until the filming didn’t deter the crowd of Ellen fans. One screaming woman even had a shirt that read “this moment is worth all of my student debt.”

When asked if it mattered that the talk show host herself wasn’t going to be there City College of San Francisco student Tiffany Cheung, who dressed up as the Pixar lamp said “I’m willing to be here to be on it.”

And that was the general consensus – the chance to be on the show and live stream to Ellen was worth standing out in front of the sporting goods store. Once 4 p.m. came around, a handful of people who had the best emoji balls were then chosen to run around the store, via streamed orders given by Ellen, and complete given tasks.

For the four competitors that won Dick’s Sporting Goods gift cards between $500 and $5,000, the contest was pretty cool. For those who got to hang out in the foggy weather, draw faces on balls, and be on television, the filming was also pretty cool.

Overall, it was a pretty cool day.

Thanks, Ellen. Even though we were all catfished, we still love you.